A few weeks ago, I attended a night of beer tasting with a difference.  It was of the last thirteen winners of CAMRA's Champion Beer of Britain and was hosted by Warminster Maltings.  This was both a celebration of and a tribute to Maris Otter malt, which has been the malt used in no less than ten out of the last thirteen champions.  I bet you don't know which ones weren't, but don't worry, I won't keep you waiting.  Only Deuchars IPA, Haviestoun Bitter and Twisted and Rudgate Mild, didn't use it.

Another first for me was that it was held in the Bull at Highgate, a pub that I'd never visited, but which is pretty famous amongst London beer buffs.  It is also home to its own micro brewery, which could be seen from the area just to the left of the bar.  Now I must say that the Bull, whatever I might have been expecting, was hardly your traditional boozer.  In an affluent area, it was nonetheless warm and likeable, but no bare boarded ale house. Think more chintzy than that, but it seemed to have a good mix of customers amongst the assembled beer glitterati.

Beers were divided between the main bar, a specially erected stillage and a decent sized room with its own bar upstairs where most of us ended up.  Oakham JHB with its clean spritzy taste and touches of lemon it had an almost "radler" feel about it. Castle Rock Harvest Pale which was so good that you could see immediately why it had won the supreme gong. Surprisingly tasty and likeable was Triple F Alton Pride which a few of us hadn't rated that highly before, but which on the night was a beer to return to and one of the stars of the show. 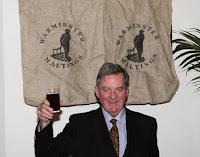 I was lucky enough to have a ten minute chat with Warminster Maltings owner, Robin Appel, who is credited with almost single handedly rescuing Maris Otter from malty oblivion, when in the early 1990s, together with H Banham Ltd of Norfolk, he approached the then owners of the variety with the express purpose of rejuvenating it to satisfy the demand of the real ale market.  Much work was done to make it commercially viable once again and in 2002, Maris Otter was bought outright by H Banham Ltd and Robin Appel Ltd, which have continued to improve it to ensure Maris Otter preserves its original identity and will not compromise the traditional flavour of some of Britain’s finest beers. Robin was a very interesting host and I enjoyed his tales of JW Lees earlier generation of whom he spoke fondly.  I have the feeling that if Lees fancy returning to the Maris Otter fold, Robin would be quite happy.

Finally a word about the food which had been designed using what else but Maris Otter malt as an ingredient.  Maris Otter inspired Scotch eggs were superb and to my delight various haggisy nibbles were available too and for me a perfect accompaniment to the beers.

The Bull is at 13 North Hill, Highgate, London N6 4AB. Easy five minutes from Highgate Tube.
Posted by Tandleman at 12:32

I agree about scotch eggs but not haggis. Noooo. A value scotch egg and 4 pack of fosters. Can't be beaten.

And to think that the (admittedly bulk-buy catering pack)Scotch egg was once the despised lowest common denominator of pub cuisine ...