Saison To Be Jolly


I was at a funeral yesterday.  It was for one of my CAMRA friends and during the humanist service, we listened to his eulogy as we stared uncomfortably at his hop be-decked casket.  My CAMRA colleague had no family and it was touching to hear how his friends rallied round and how his CAMRA trips and friends had been a highlight in his life.  CAMRA is often accused of being a social club, but as I sat there, I reflected that if that's one of the worst things we are doing, good for us. Afterwards we celebrated, if that is the word, at a cheery wake in the Baum.  I suppose the aftermath of a funeral is often a cheery affair as we give silent thanks that it isn't for us that glasses are being raised. Yet. 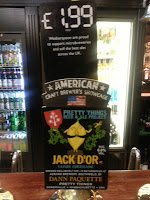 As everyone started to drift off home, on the way back to the bus station three of us passed the Regal Moon and felt compelled to pop in.  We spotted Pretty Things Jack D'Or Saison Americaine, brewed at Adnams, on the bar and despite its 6% abv ordered pints thereof.  What a great beer. First of all the nose which had delicate sweetness, a touch of brett and an overall bouquet that siren like called out "Drink me".  We did and it was luscious; peppery spicy from rye with a bittersweet Belgian mix of slight sourness, balancing malt sweetness, lemons and a good dash of hops to finish.  It was perfectly cask conditioned, full bodied and satisfyingly drinkable.  It cost us a few buses as we supped, perhaps unwisely, a couple more.  But funerals, if nothing else, make you want to seize the moment.

Seek this beer out.  It is seriously good.

wow, I've tried and loved the original, fab that they brewed this one at Adnams...hopefully I'll bump into it

Glad you sent your pal off in a nice way. Not sure why a beery social club is considered a bad thing. It sounds a rather nice thing. A lot nicer and more harmless than a campaign, for sure.

A humanist funeral is just about the most depressing thing I can imagine (apart from possibly a Baptist one with nothing to drink) so a few pints probably went down a treat.

Can't say I liked the Jack D'or very much when I tried it though. It had that sort of spicy 'Belgian' flavour that I just can't get into however much I try. Sorry Belgium.

I've been to a couple recently and found them uplifting and really quite jolly.

Sorry I couldn't make that. He would have approved of the drink in Spoons after:)

Ben Viveur, I've attended a couple of humanist funerals, including one fairly recently for a former work colleague. As they were both intended as a "celebration of the deceased's life", like Tandleman, I found them quite uplifting. If there is a best way to go, then surely this is it?

I feel like death this morning.
Foolishly decided to take the dog for a late-night walk after a long session of rugby and Guinness.
He's quite skittish and forever getting under your feet so, naturally, I had a small speed wobble and took a tumble over him.
To be fair he did wonder why I was lying on the pavement looking up at the stars and joined in the game by slobbering over my face.
It was only when the booze wore off and the pain kicked in, somwehere around 3am, I realised dogs,like alcohol,should carry a health warning.