From time to time I tell you about the many pubs local to me here in London. There's good and bad, with one or two where I really like the pub but not the beer and some, the other way round.

On the way back from an event I thought I'd check out the Hoop and Grapes at Aldgate, which was a pub I used to go in from time to time around ten years ago. Since then it has become part of the Nicolson chain and is shall we say, considerably cleaner.  Alas last night I was unable to update myself,  as at six o'clock the place was so rammed that I couldn't even get to the bar.  Trading well then.  A skip round the corner to the White Lion in Alie St.  Shepherd Neame with all that entails, which is a range of beers that all taste more or less the same. It's a funny little pub, which again we used to go in around ten years ago, but don't now.  It was also very busy, but service was swift. Bizarrely the barmaid thought my request for a half of Amber and of Whitstable Bay was for it to be served as a mix in a pint glass.  That sorted out, I wished it had been, so awful was the Amber and so ordinary the Whitstable Bay. 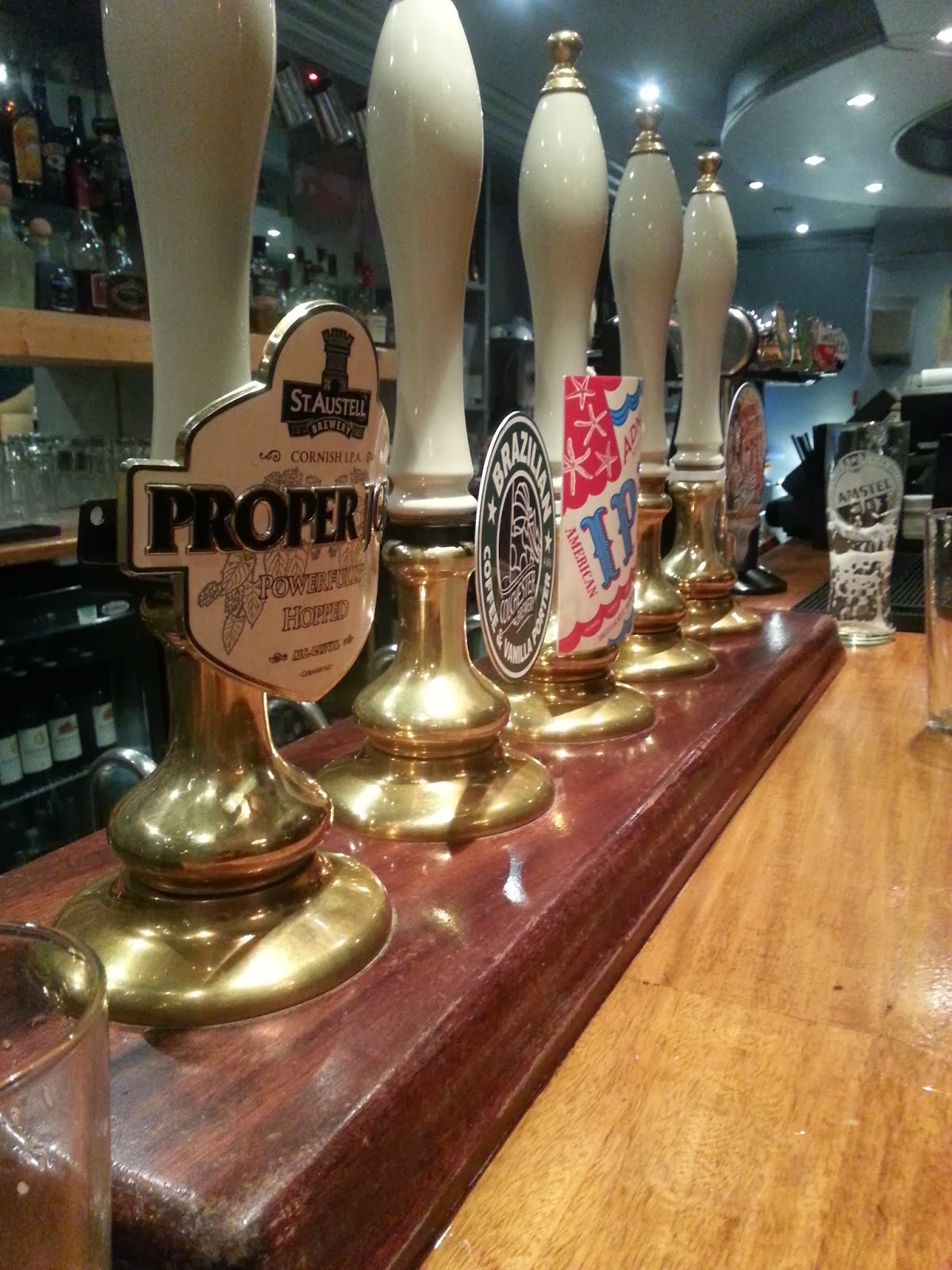 Onward and homewards.  The Dispensary used to be a local CAMRA Pub of the Year.  Despite its braying hoard of suits, we used to like it,  though beer quality varied and the old problem of very warm beer finally drove us out.  No such problems last night. The suits were still there in force, but the beer was cool, varied and well conditioned and a very pleasant pair of barmaids ran the show with a smile.  Adnams American Pale, St Austell Proper Job and two from Colchester Brewery (new to me)  were all excellent, though the Brazilian Coffee and Vanilla Porter wasn't to my taste - vanilla in beer? - just say no.  A good visit and worth a second chance I'd say. 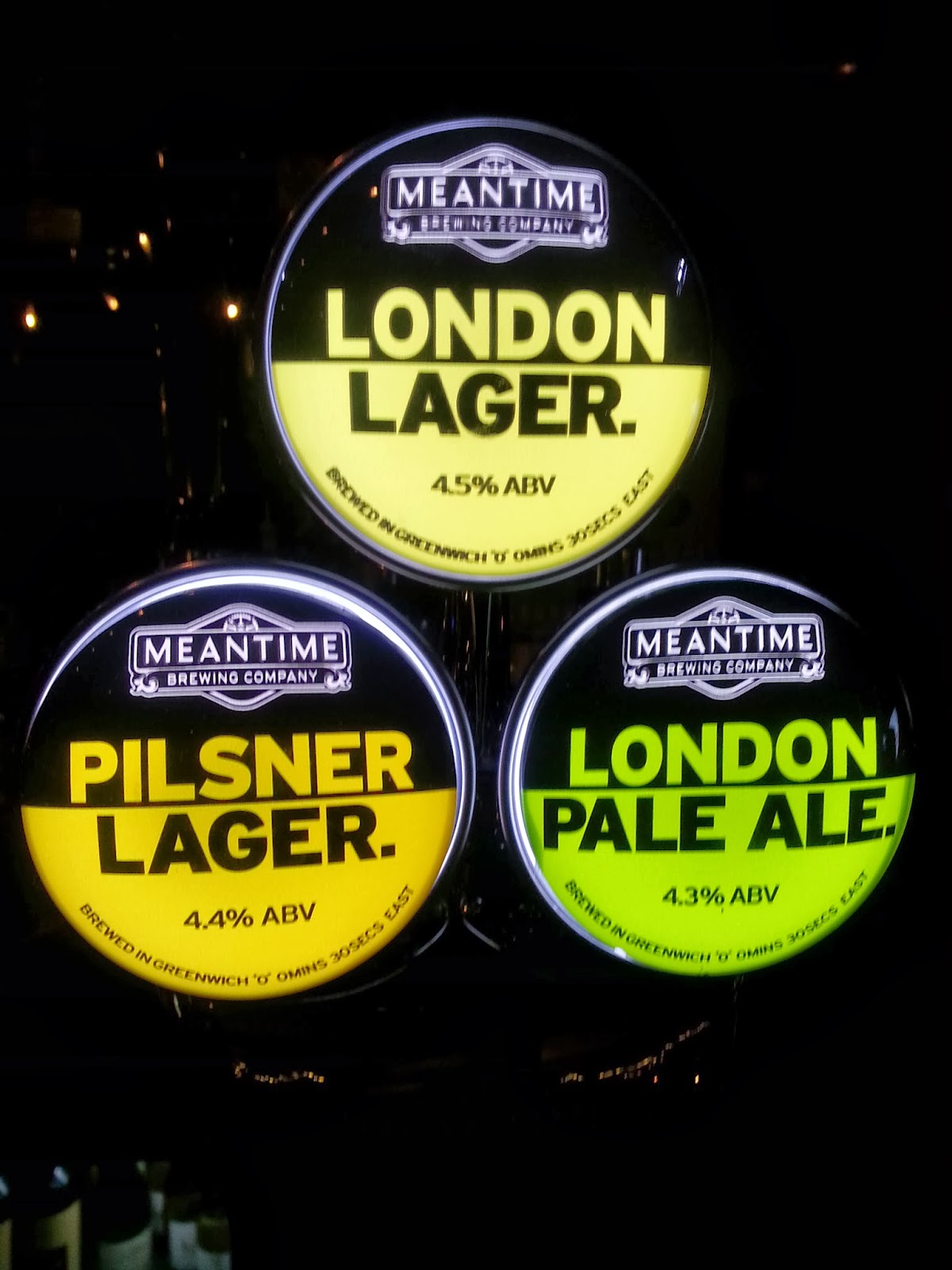 I looked in the window of the Black Horse (not rammed) but didn't fancy either GKIPA or OSH, so moved on to the Oliver Conquest. Now this is a bit of an oddity. It had a chequered past under a different name (Mr Pickwicks) and was a notorious after hours hang out, despite being next door to the cop shop.  (I remember people tumbling out of there pissed at five in the morning as we were on our way to Liverpool St Station en route to Stansted Airport.)  It was (compulsorily) closed for a while and now in its new incarnation, is a cosy hang out of oddballs.  It offers a gin selection of over 100, a couple of handpulls, including Landlord and young staff that always seem to be whispering conspiratorially to customers. Nonetheless it is quite likeable in a tart's boudoir sort of way.  The very pleasant barman discussed Meantime beers with me happily, as he'd just come back from a brewery visit.  Meantime Pilsner was my choice and it was good and at £4.40 a pint, about par for the course I suppose.

So busy pubs for a Wednesday night, a mixed bag and two I want to go back to within five minutes of our flat. Result.

There was a few craft keg offerings including one from Hog's Back.  That one was a surprise.

Colchester are generally a pretty solid brewery in my experience.

I was in town last night, Tandleman, I could have looked you up if I’d known. Actually I was in London for a concert, and a very good one at that, but I did manage a couple of pints, plus a bite to eat at the Bree Louise. Believe it or not, this was my first visit to this, at times, controversial pub. I won’t say much here, as I’ll be writing a short post on my visit later. What I will say though it was rather like the curate’s egg, “good in parts”!

BTW, I thought you would know better by now than to bother with Shepherd Neame. I always avoid their pubs, and especially their beers, like the proverbial plague!

Paul. I know. It was the triumph of hope over experience. but they do have some nice pubs.