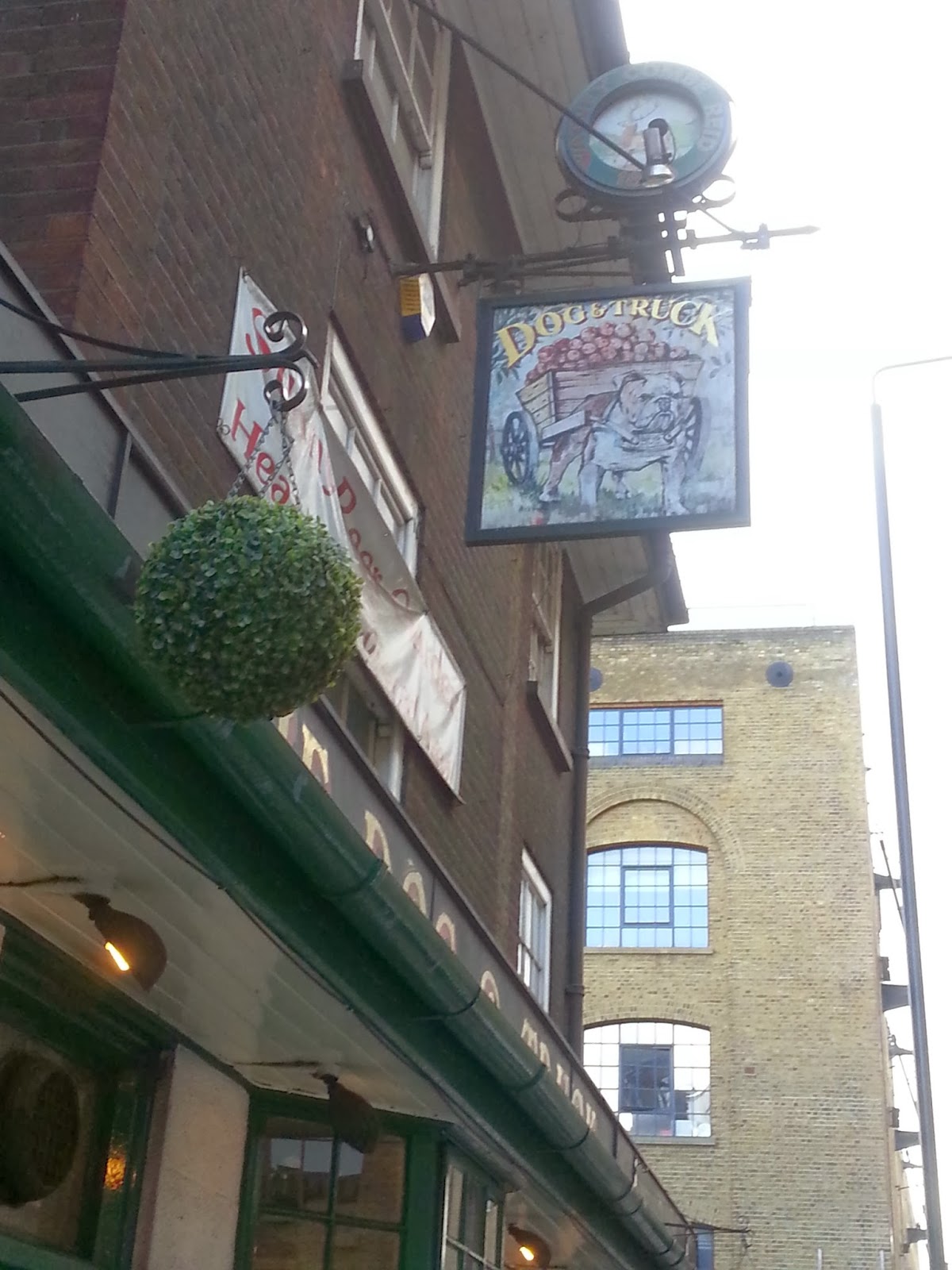 I'm still on my "Pubs near my London flat" theme. There's one very near indeed that I had (until yesterday) never been in despite our fifteen years or so of it being just round the corner. The Dog and Truck I am told was rebuilt in 1935 in its present form and survived the wartime bombing unscathed. Hidden in Back Church St in East London it could be considered as a hidden gem. Well certainly hidden, though it is just five minutes off busy Leman St. But is it a gem and why despite its nearness have I not called in? I suppose the answer is that the time was never right.

The first thing you notice about the Dog and Truck is its faded Watney Combe and Reid livery.  Inside you step into the 1970s.  One single room, long and bare boarded is served from a long bar.  Typical of the seventies, there is a food servery on one side of the bar, from which astonishingly cheap (for London) food is dispensed. Think three Cumberland sausages and mash for under a fiver.  The menu has a kind of retro feel too, though food service was finished when I called in.  There are three handpulls offering Greene King IPA, another GK one turned round and thankfully, Harvey's Sussex Best which I chose and which was in splendid form. Clean, vibrant, cool and conditioned.  Lovely. I looked around. Inevitably there was a dart board and a pool table plus fruit machines.  No Space Invaders though, which was disappointing and no pink formica topped tables either, though I wouldn't have been at all surprised if there had been. Also typical of the seventies was a set of framed banknotes from around the world above the bar. 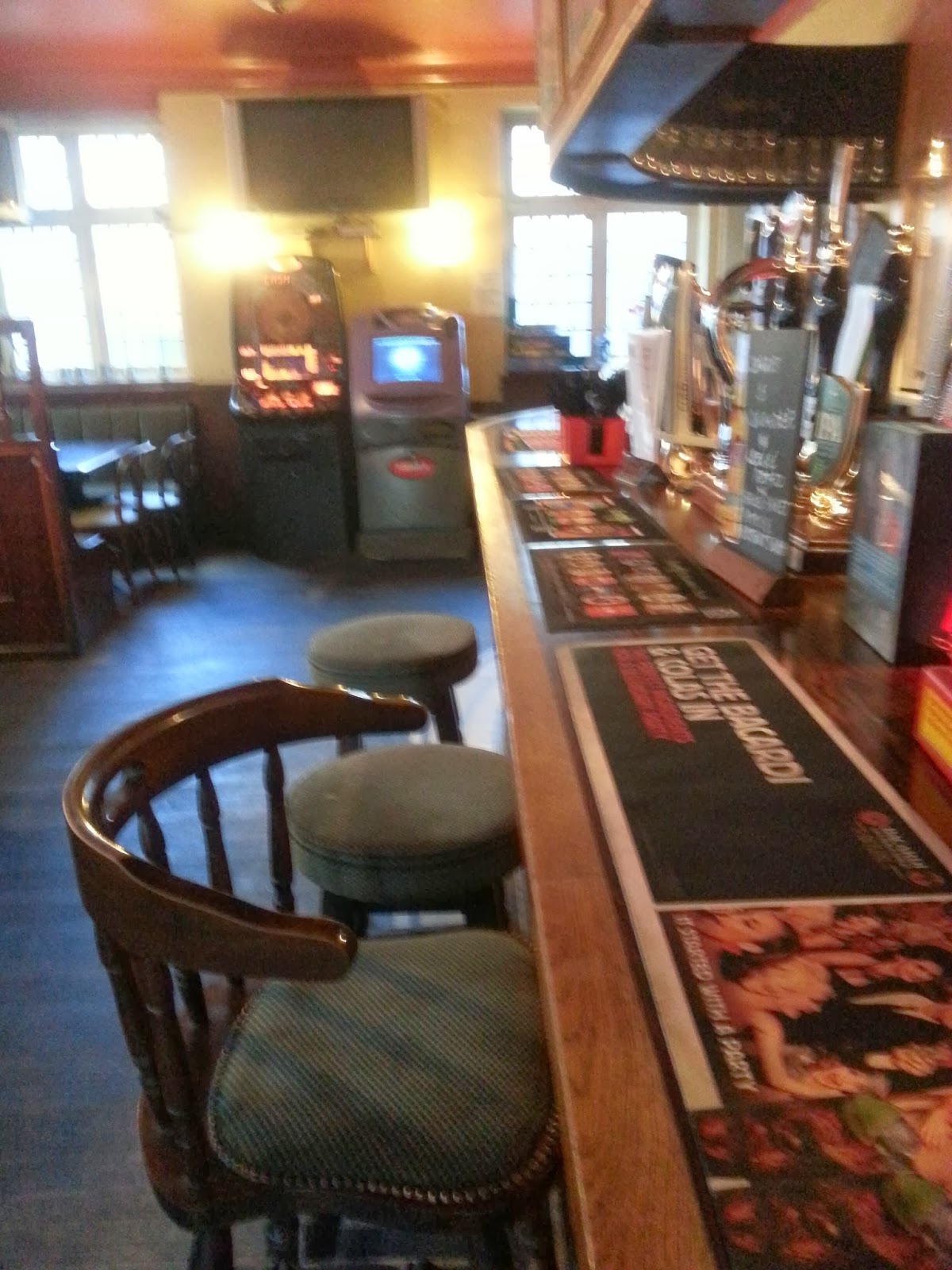 The pub had three other customers just finishing their pints when I arrived and within five minutes, there was just me and three - yes three barmaids - plus the landlord and landlady.  The boss was tilling up and the landlady sorting out some baked potatoes .  The barmaids scurried about busily.  It was a slightly surreal scene as I was completely ignored as if I was invisible, but not in a remotely unfriendly way.  One barmaid served me twice.  The only words exchanged were "£1.90 please" for my halves of beer.  No warm East End welcome, but I didn't make any effort either, serenely content as I was, sipping excellent beer in my time capsule.

I liked it a lot.  I'll be back and I'll make an effort to chat and hopefully too, I'll find it busier. I'm looking forward to it already.


It was a funny old day pubwise yesterday. More of that soon.
Posted by Tandleman at 09:59

Labels: All Our Yesterdays, London, London Pubs
Email ThisBlogThis!Share to TwitterShare to FacebookShare to Pinterest

do you ever do owt interesting in London, or just bum about old mens pubs?

No. That's about it really.

That banknote thing. What WAS that all about?

Collections of all kinds used to be popular in pubs, although much less seen now. Banknotes was always a favourite, although Tommy Duck's in Manchester famously had knickers.

I cycle past the pub every morning and have always been intrigued by it. I take a different route home but had always made a vague mental note to go via it and check it out.
Will certainly do that now, sounds a perfect place to hide away from the world for an hour with a book.
Sausage and mash for fiver and a pint of Harveys? Despite plenty of 'happening' pubs not far up the road with more esoteric beers, sometimes the simple things are all you need.