The long awaited JDW, The Captain James Lang, in Dumbarton has opened and a a fine place it is too.  The former Woolies has been transformed into a modern and comfortable pub with a long bar and eight handpumps (which is probably the most Dumbarton has ever seen) bringing cask ale back to the town.  Seating is a mixture of high and low tables, booths (which are popular and commandeered by twos in each case, though they'd fit four comfortably) and a beer garden with spectacular view of Levengrove Park, the River Leven and Dumbarton Rock.  It provides food up until eleven at night which brings the number of such pubs in Dumbarton doing so, up to.... err.... one.  On a Monday night when I rolled up with my old Mum, it was doing a roaring trade. 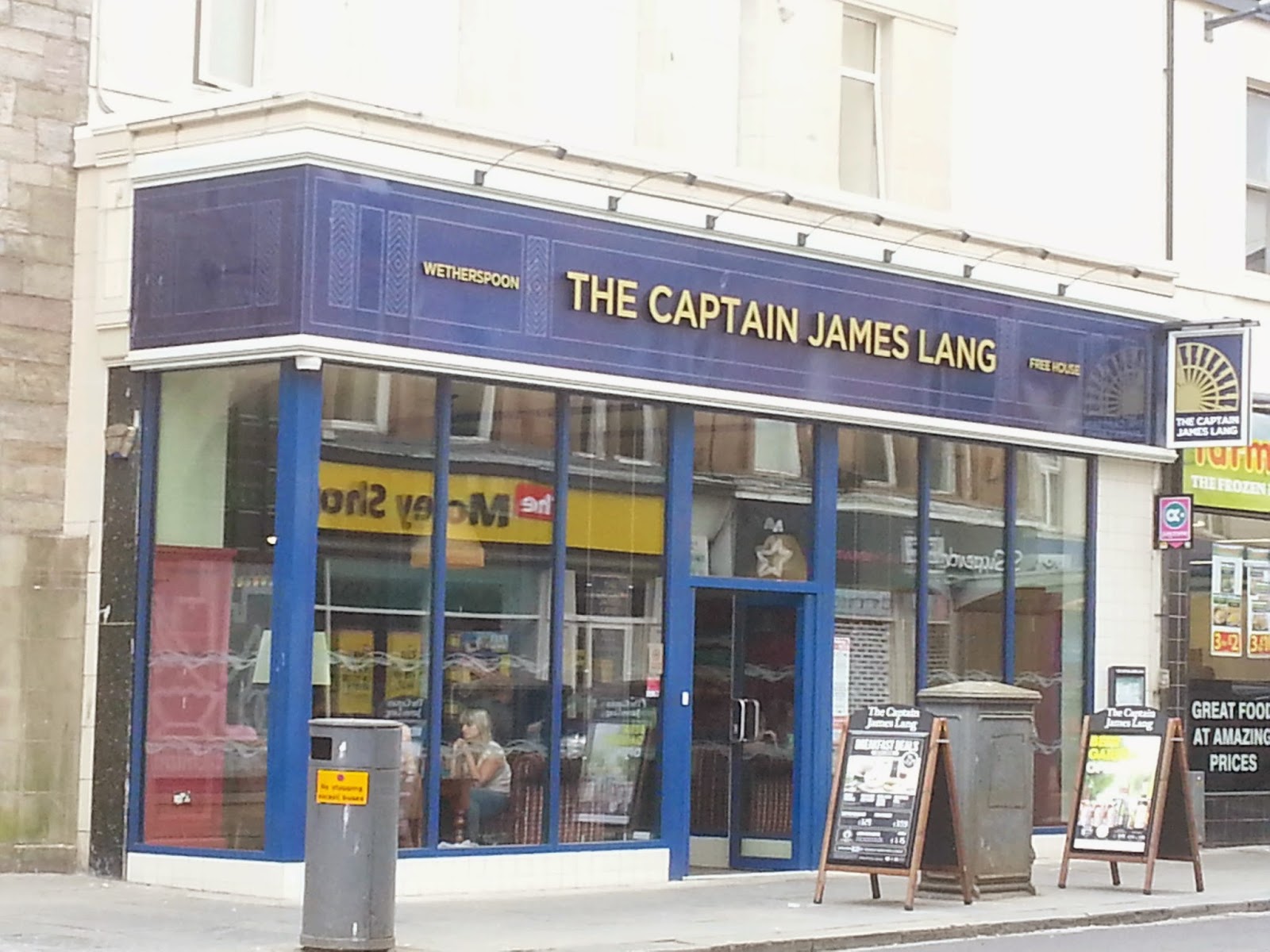 Now Dumbarton and cask ale are complete strangers to each other.  I ordered a pint of something from a Scottish Brewery (I can't remember which) and asked thr barman how the cask was doing.  "Flying out" quoth he.  My pint was disturbingly murky.  Not London Murky perhaps, but too murky for my liking.  It was also stale tasting and exchanged with a smile and apology for another pint of murk from a different handpump.  Hmm.  Third time lucky?  Doom Bar it was. Clear looking, so a result?  Not quite.  It was sour and acetic.  I ordered a gin and tonic and went back to my Mum, whose red wine was fine.

Meals next. A mixed result. Cremation of meat seems to be the order of the day.  My burger was just about OK though hardly succulent.  Mum's gammon steak had great potential.  Potential as an offensive weapon, or as a stone age axe head.  This was exchanged with apologies and later, unexpectedly, by a refund.  I took the opportunity to have a chat with the charming and helpful Duty Manager who put it all down  to teething problems.  I don't doubt it, but it didn't make for a great experience. It will be all right here though. Staff were absolutely fantastic.  Cheerful, helpful, doing their best and showing signs of being a good team. Mum enjoyed it too,  though I think it was more the red wine, the presence of her son and reminiscences of Woolworths.

Don't worry Dumbarton. It will soon be sorted out, but please drink the cask before it goes off.

I didn't notice until my way out,  as it is tucked away to one side, but a bonus is West Brewery St Mungo on sale.  That'll be my tipple until the cask situation is sorted out and not a bad choice in any event.
Posted by Tandleman at 12:42

Seriously? "Teething problems"? In an outfit that replicates drinking units like no-one else? "Hope spings eternal..." and all that.

No doubt py will be rushing up there as I write...

It has to be said many Spoons don't really seem to have grasped the concept of cask ale cellarmanship.

If you go in a random Spoons and order one of the guest beers, your chances of getting a cloudy one are unacceptably high, I'd say.