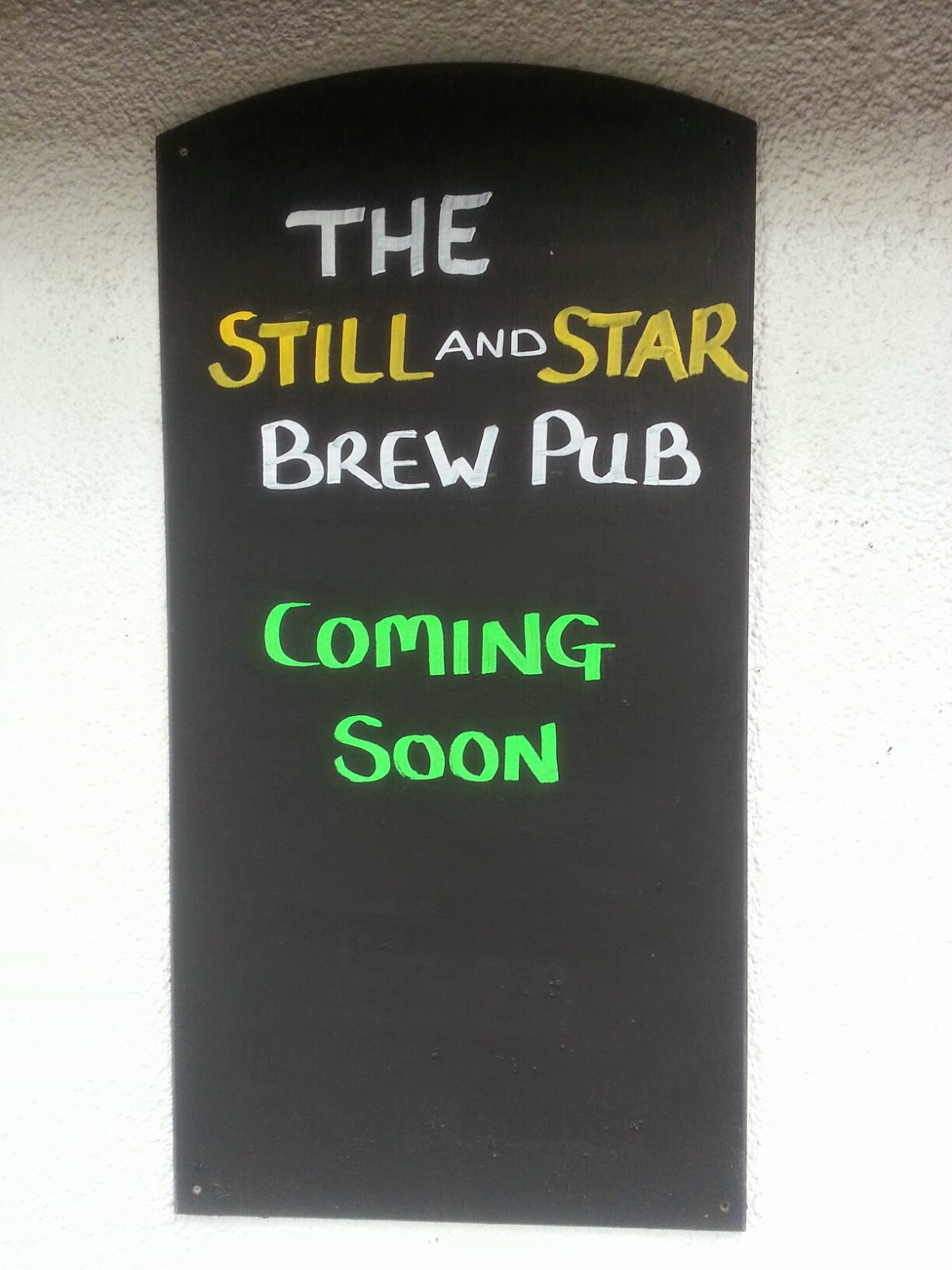 Is it brewing? Is it not? I'm still a little unsure. I went in as promised on Tuesday teatime and there were four brown beers on the bar and one harassed barmaid.  There was no smell of brewing or any obvious recent brewery activity.  My inquiry elicited the polite information that there would be no home brewed beer until after Christmas (which I took to mean next year) and that brewing was already taking place.  It may be that the Citra mentioned in my last post was just a trial, but since the poor lass that answered my inquiry was so busy, I thought it inconsiderate to question her further.  So it may be and it may not.  The photo of the board outside which illustrates this post is either information, a teaser, or both. In whatever case it has been updated.

Now Professor Pie-Tin takes me to task about writing about this new venue for a brewery.  He says "You've written an entire post based on a brewpub you haven't been into since it became a brewpub and a beer you haven't tasted. I'm all for clickbait lovey but play the game a little bit at least."  Well I didn't know he cared, but since when did investigating a new brew-pub near where you have a home come under the term "clickbait"?  Should I be miffed?  Not really - it's all part of the game -  but if PPT wishes a few more targets for his disdain, I can point him to many well known bloggers that excel in clickbait.  Bloggers chasing audience or building beery careers are all part of the game. Me? Perish the thought. I'm past all that. Still, he has got me to answer, so a point to him. He's one of my regulars though, so all is forgiven.

In my brief visit to the capital, I had a few pints in a rammed Market Porter.  The beer wasn't as good as my visit a couple of weeks ago and it was rammed then. Just not quite as rammed.  The old enemy of great cask beer, too a high a temperature was the culprit, but the heat in the place made the beer slide down anyway and it was a great atmosphere so all wasn't lost.  In fact following a wise trip to the Dean Swift for very good Dark Star Hophead, an unwise visit to the Draft House in Seething Lane ensued. We left later than we should have and afterwards I found myself somewhat potless* and accidentally pissed.  I felt more than a tad rough on Thursday.  In fact we both did. Been a while since that happened and not hugely enjoyable.

It was an AFD on Thursday and back to Manchester boozing on Friday with my oldest friend Mike. At his request we only did pubs, not bars. On Frantic Friday, it was a good plan.

I was given three bottles of beer by Eileen's colleagues as a Christmas present. Well chosen too. One each from Mikeller, Kernel and Redchurch. Not bad eh?

* Skint. Getting pissed in London is a dear do.
Posted by Tandleman at 11:07

Why would you need clickbait? The Tandleman is top of the pile, other bloggers are simply attempting to climb to these heights.

All is forgiven!?!? Just like that? That's a bit easy.You'd think it's Christmas or something.

I love a bit of chew. Pedro's clearly steaming here. I'll tell you what, it's a good job Professor Pie-Tin's out on Deangate Locks tonight (that's the only place I've ever been out in Manchester so my only frame of reference) or there'd be hell on.

Question: do we think these small scale brewpubs need a planning consent before they can start brewing, as well as a brewing licence? If not, are the ones that are starting up even engaging with the EHO authorities before they crack on? I bet some aren't bothering.

ah bollocks man, I meant it's a good job he's NOT out.

@ Stonch.
Always proof-read before posting.
Blogging 101, old cock.
I vouchsafe Tandy is a decent cove and appreciates a bit of verbal jousting.

Bro, Pedro loves a bit of chew, and that's what makes him a legend. If you get in any bother he's the type of lad who acts all conciliatory then suddenly sticks a nut on a key man and kicks it all off.

I'm afraid that these days I am much more likely to be necking a few than decking a few.

But you remind me of more boisterous and carefree times.

@ Stonch
I know you think you're Danny Dyer but I always had a short-arse like you down as Danny DeVito.
Wahaay !

I'm told The Still and Star will have beer brewed from their onsite brewery on the bar tomorrow 14th Jan. I have already sampled some previously and it was very fresh and very good quality. It's a professional brewery system and not Home Brew!