Sad Demise of an Iconic Beer


I read without much surprise about Carlsberg withdrawing the availability of Draught Burton Ale. It was formerly Ind Coope's Draught Burton Ale and once upon a time a Champion Beer of Britain. In 1990 in fact, though it had been around a fair length of time before that. Since 1976 in fact.  The 1977 edition of the Good Beer Guide describes it as "pale and well hopped". It had an Original Gravity  of 1047.5 - no alcohol by volume then - and by the time that became the norm, in 1990, it had settled at 4.4%.    It wasn't always described as a pale, hoppy beer, but sometimes as "sweet and malty" or "pale and fruity". It gains some rather grudging praise in 1990 and 1991's guides, but much more generous comments in 1992 when, such is the lead in time for the Good Beer Guide, it was the current (for that edition) Champion Beer.  By then the alcohol content had risen to 4.8% and praise was much more fulsome, though I for one take the 1992 description, which amongst other things misses out the distinct complex spiciness, with more than a pinch of salt. 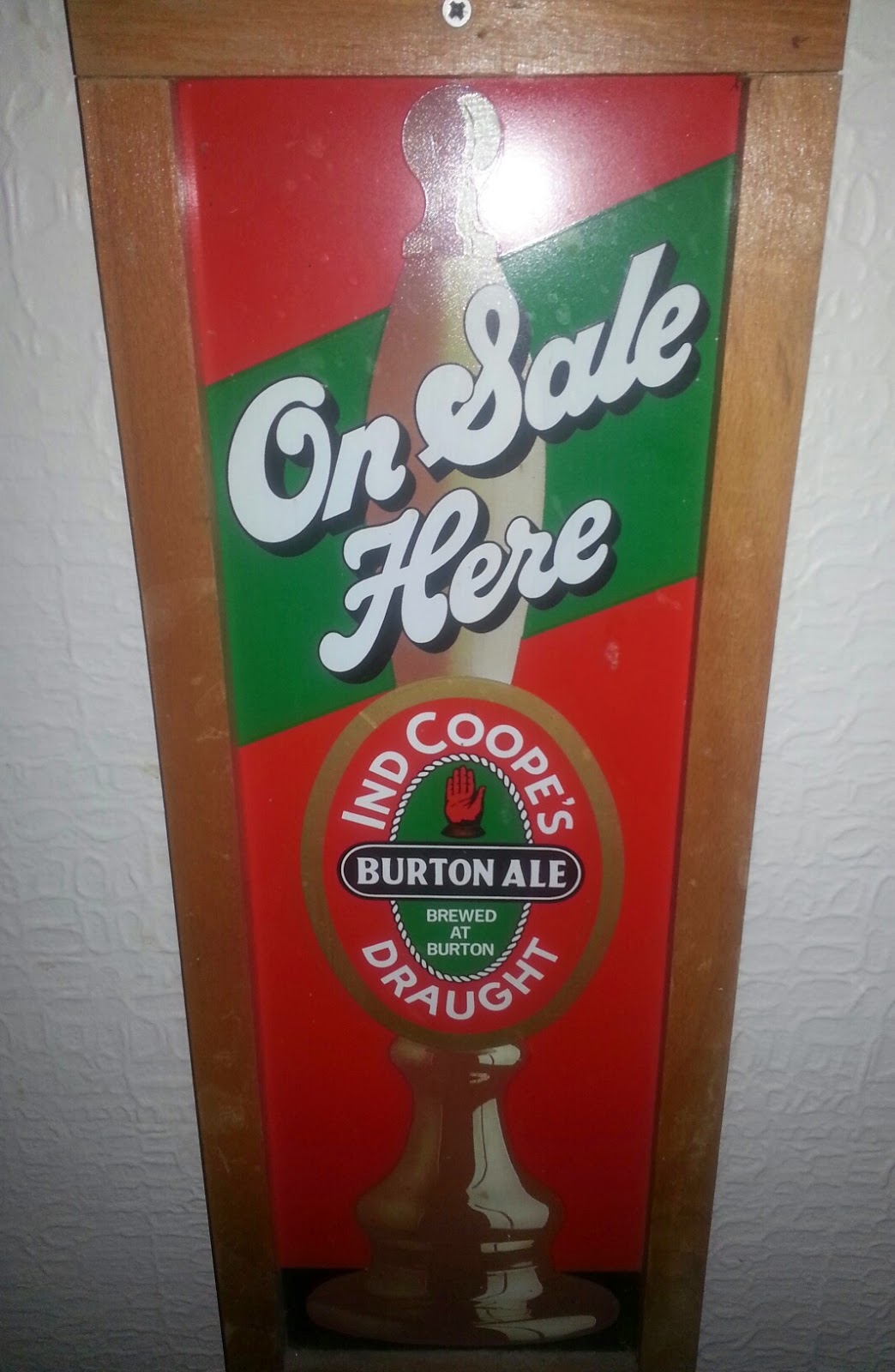 Now I have a relationship with ICBA that goes back quite a few years.  When I worked in Leeds it was the premium beer in quite a few Tetley houses, including the Palace Hotel near my office and where, of a Friday, I used to go for a few lunchtime pints.  Long before I retired though, the lunchtime pint was frowned upon, but these were halcyon days. My lass worked in the same building at the time and was, (not always entirely willingly) able to drive me back over the Pennines when, with other reprobates, I had (over indulged) in a few pints of Burton Ale. Pale, perfumed, spicy from the Styrians and with a lovely, delicate, fragrant bitter, flowery, hoppy finish, it was simply divine.  One was never enough, but it went for you. Many a Friday lunchtime was extended by "flexitime" to an afternoon session and we all left pretty much the worse for wear. For me, it wasn't so bad. I was in charge of my area and my bosses were in Edinburgh. Should I be ashamed of that little abuse of power? Not a bit of it. Those were the days my friends.

Sadly over the years I encountered ICBA less and less, though when I did it was always consumed with relish. When Tetley's closed and as part of the deal for JW Lees to brew Carlsberg under licence, Burton Ale, now shorn of its Ind Coope name, was moved to Greengate.  They didn't make a bad fist of it at all and I sometimes had a taste of it in the Head Brewer's sample room, where a cask of every beer in trade is kept.  Michael Lees-Jones, Head Brewer of  JW Lees had told me that volumes were falling away, but I wasn't aware it had gone. If I had been I'd have nipped down to Lees for a sentimental last pint, but maybe such things are best left in the memory.

There has been some surprise expressed about the sadness with which some commentators have described the demise and loss of this beer. Those expressing sadness are right to say so. I don't think it too generous or fanciful to describe Draught Burton Ale as iconic and the loss of any icon is a moment for regret and reflection. I am grateful to Boak and Bailey for the information here about the early beginnings of ICBA, though I do think their conclusion about it being a "sop to CAMRA" seems more than a tad wishful.  Perhaps I would, wouldn't I, but I did enjoy the tales of how Ind Coope buttered CAMRA up so as not to dismiss this big brewer's beer out of hand. It had the ring of truth, though nowadays that would just be seen as "sensible marketing."  Sadly though ICBA was a victim of a changing brewing industry and uncaring owners. It's death was slow and lingering, but it is good to remember it in its heyday. All pomp and swagger.

Goodbye Old Friend. It really was good while it lasted.

And no. In historic terms, it wasn't a Burton Ale, but an ale, made in Burton. An IPA in fact.  I used to see the drays from Burton coming into Tetley's, no doubt loaded with ICBA.  I can picture them yet, Dark Green, with Ind Coope on the side and front.

The photo is from my own study where this plaque is on the wall.
Posted by Tandleman at 16:33

An insight into the public sector psyche there! Very enjoyable read Pedro.

The Gunmakers had been an Ind Coope house before it was Charrington's (up until 1919 in fact). I got some Burton in a few times from Carlsberg and liked it. Very sad to see another old beer finally disappear.

Many will have forgotten that Allied Breweries had shorter-lived regional equivalents in the form of Ansells Aston Ale and Walkers Warrington Ale - neither of which were anywhere near as good.

In the late 70s at university in Birmingham our local was an Ansells pub that had keg mild and bitter but cask Aston Ale. It was OK, but a bit on the heavy and sweet side.

Eye Jeff, that's why Maggie liked to outsource them.

I seem to recall Ind Coope Burton Ale was quite expensive when it was first launched; around 10p a pint dearer than many other beers. It caused a bit of a furore at the time, but there was no getting away from the fact that it was a mighty fine beer.

I was still living in Manchester at the time of its launch, but I don’t recall seeing it in any Tetley-Walker pubs in the city. Trips back to Kent also found it thin on the ground, as there weren’t many Ind Coope pubs in the part of the county where my parents lived.

My first pints of it must have been in London, where I lived for a few years during the late 1970’s, although I don’t recall where exactly I first drank it. I haven’t come across a pint of ICBA in years, but very sorry to learn it is no more!

First beer I ever drank.

There is a version of the recipe knocking around. If some home or craft brewers are interested in recreating it.

Hops: Target for bitter (30 IBU's) and Styrian Golding for aroma and dry hop.


One question, was there a "Burton snatch" aroma from the beer?

Most definitely not! Or I would have said.

Does the increased praise in the GBG coincide with Protz taking over? He was always a big fan of the beer.