Tapping in to Leeds


More serendipity for me. Reading about the new(ish) Tapped in Leeds one morning in Beer Magazine and visiting it unexpectedly the next day.  This is getting spooky.  I used to work in Leeds and still visit it now and then. One such time was a couple of Saturdays ago while E was having her hair done. I accompanied her and had three hours to myself. A pleasant 45 minute walk from Headingley through student territory took me to the City Centre. Plenty of people watching on the way added to an interesting downhill stroll.

Friends of Ham, much lauded in various Leedsy blogs was a tiny place when I last visited it, but now it seems to have doubled or more in size. At just before one o'clock it was packed with a mixed crowd scoffing Iberian porcine products and not a few drinkers.  There was around three cask beers and a number of keg ones and brisk, friendly service. I didn't notice any obtrusive music and the place was abuzz with conversation. Big ticks all round. A bonus was bumping into two of my lads scouting out the place for our forthcoming CAMRA Branch crawl of Leeds. The dedication of these people knows no bounds. I joined them for a quick half of something dark and delicious. It was in peak condition as you'd expect in Leeds. OK they served it in those daft dimpled mugs, but one can't have everything. 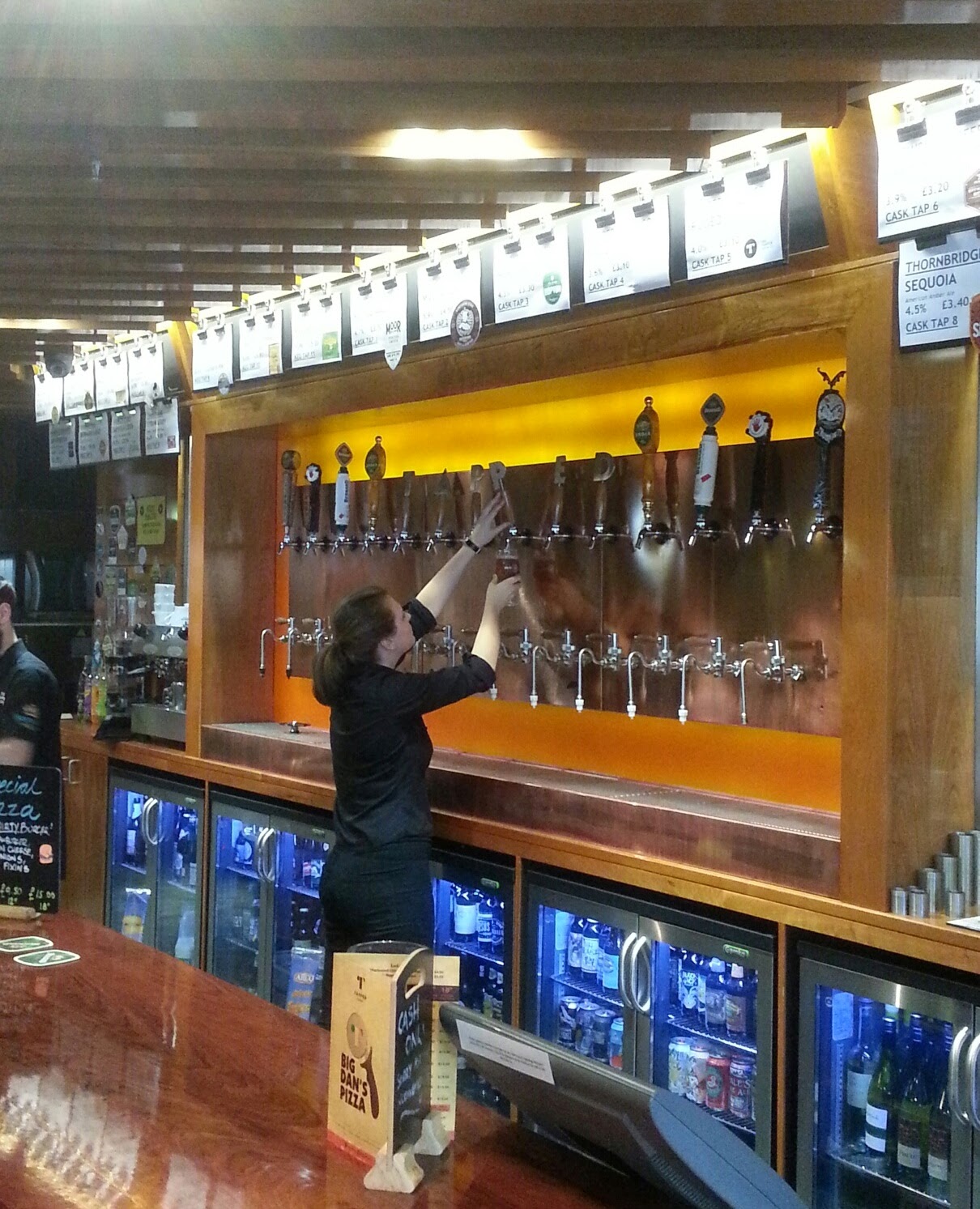 However delightful as Friends of Ham was, I wanted to visit Tapped, just across the road in Boar Lane. This is a large beer hall sort of place. Large windows out front let in (surprisingly little) light. There are tall tables in rows, a long bar, subdued lighting and a small, shiny brewery down one side along the wall.  It was again bustling, but service was quick and pleasant and the beer choice was good.  I didn't count the taps, American style against the bar wall, but I'm sure in mid twenties, evenly distributed between cask and keg.  Beers were competitively priced and the cask in immaculate condition. I enjoyed Brewsmith Pale Ale from my own area and Anarchy, brewed on the premises which was "unfined" but clear as a bell. Any bum notes? Only the ghastly "chick chick" bass music that was both unwelcome and unnecessary. Still great though and well done. 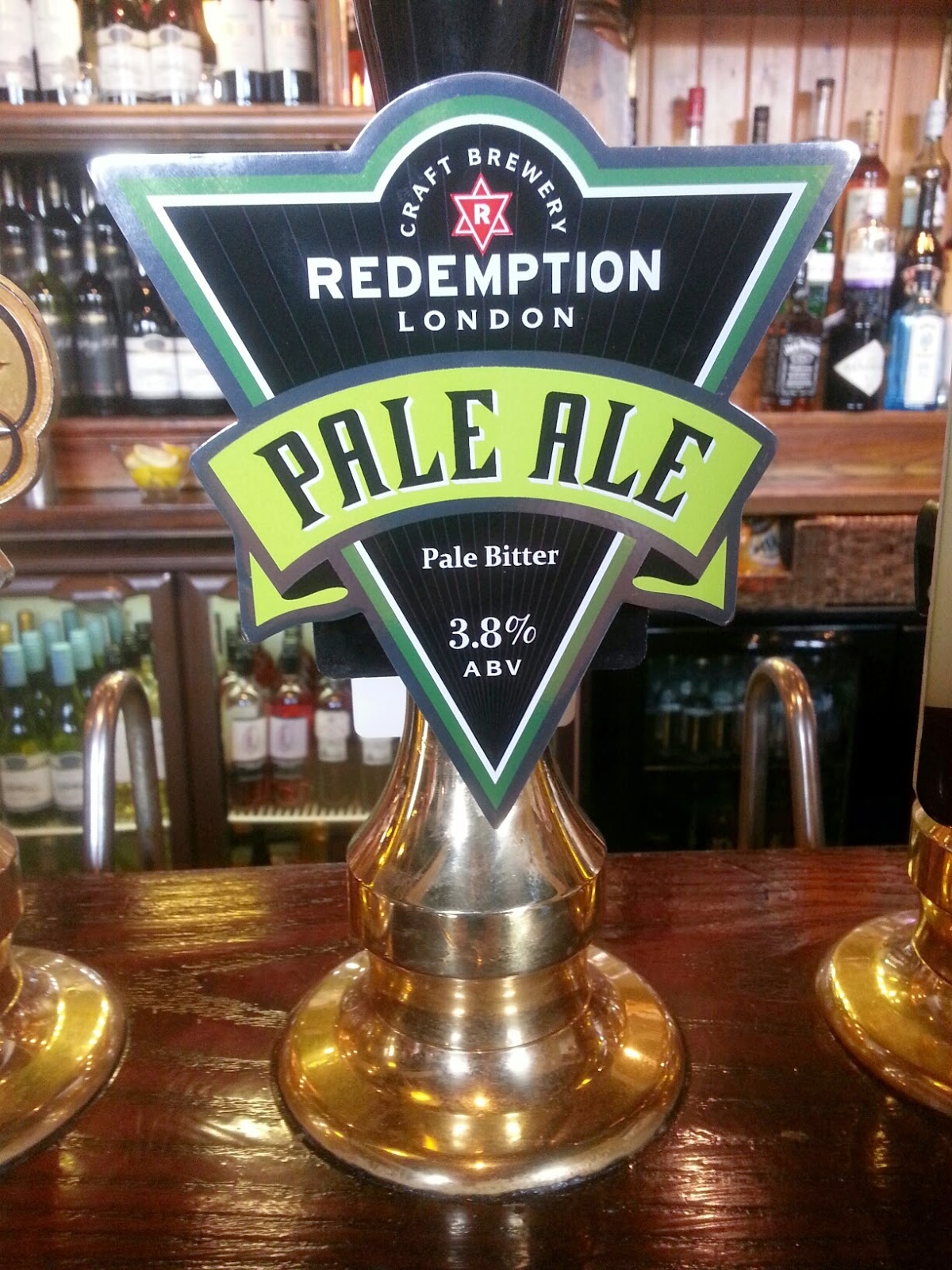 Time was drawing on though. I had to be outside the Palace (my old Leeds local) to meet the newly coiffured E in an hour and I still had to visit that venerable and excellent institution, Leeds Market for some vittals. That done it was time for a couple of swift halves in the Palace. Alas no Ind Coope Burton Ale, but I was able to contrast and compare London's Redemption Pale Ale served Northern style with what happens to it in its native territory.  It was like drinking a different beer, subtle hops, good malt base, well conditioned, sparkled and cellar temperature. Tick, tick, tick. The Palace was busy too, the beer was good and I left for my lift in good cheer.  I'd tried around eight beers and all were different and all were good. I'm looking forward to our day out there at the end of the month. These days I always look for some kind of conclusion to draw from my all too few days out. This time it is that Leeds is still great for well kept cask beer. The people behind the various "Taps" really know what they are doing and that the Manchester one(s) will be a great success when they open in the next couple of months.

It also reinforces in my mind that there is nothing difficult at all in keeping and presenting cask beer well. You need a cellar between 10 and 13C, insulated beer lines and beer which has not been over-vented. And above all  you actually need to know what you are doing, but you can learn the basics in ten minutes and then build on it.

Brewers of  "London Murky" style beers please note that unfined beer is not enhanced by the electric soup approach. Unfined does not have to equal murky.  See photo.

I didn't try any of the keg beers. Why bother when the cask is so good?  It is still a distress purchase for me by and large. Lager excepted.

What were you doing up in Headingley if E was down near the Palace?

Ach, so! She followed you down into town then.

Indeed. The hairdresser is in Headingley, the pubs in the centre and the car with E. That is the full picture.

Nice write up (as ever). Vis-a-vis sparklers - I was in the Marble Arch the other day (beer immaculate by the way) when not one but two people came to the bar and asked for the sparklers to be removed (one of whom explained how the beer was so much better without them). The bar staff were happy to oblige but I couldn't help thinking - if Tanders was here he'd have something to say. I kept my counsel.

Well I'd likely have said nothing. Did they ask for it to be warmed up as well?

No - nor did they ask for it to be stirred vigorously to get rid of most of the condition.

All of the northern brewers-in-white-coats that I have known insisted their beer was brewed and conditioned with the firm intention of being presented to the customer after being forced through a sparkler, acknowledging that that delicate southern stuff generally wasn't. Serving beer with a 'bubble raft' was not on.

Looking after cask beer is very simple. When people ask me what they should be doing I've always told them 'very little - leave it alone to do its stuff for a few days'. It's all about having a simple process and sticking to it, and not serving it immediately after it drops bright two minutes after being thrown down the cellar hatch, as is all too often the case these days.

If you are in headingley id recommend arcadia. Mostly it's student pubs with beer thats politely called cheap and cheerful. Arcadia gives 8 well kept cask lines (and some interesting keg stuff but thats prob of little interest) . Leeds tapped lacks atmosphere for me but great range of beer and friendly staff.