Bass in the Sun


You don't encounter Draught Bass that often these days in my experience. I know of a couple of places where it is sold, but I wouldn't go there just to seek the beer out as such. It wasn't always so. I used to make many a pilgrimage to the White Star in Liverpool in the early eighties, where the Bass, from Burton Union  sets was worth seeking out. The pub also sold Worthington and Bass Brew X as I recall, but I digress. 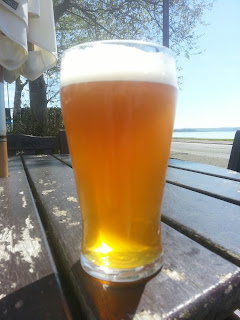 On a gorgeous summer's day last week, I was meeting a friend in Helensburgh, a town I know well from my youth in the West of Scotland. The Commodore Hotel is an imposing white building at the far end of this  neat little riverside town. It has a magnificent beer garden and wonderful views across the Clyde to Greenock one one side and the Gareloch on the other. It has changed considerably since the days when me and my plooky chums from Dumbarton used to infest it on a Sunday night in the vain hope of attracting girls. It certainly didn't sell real ale then, but it does now and is considerably more tarted up. Cask Marque accredited too, so I ordered a pint of Harviestoun's Bitter and Twisted with confidence and took it outside to savour the view.  It was cloudy - not the weather - but the beer. I knew it shouldn't be and sipped it cautiously. It tasted fine. Hmm. It was too good a day to bother taking it up with the barstaff, so I just got on with it.  A few minutes later, on entering the bar once more to purchase a glass of wine for my companion, the barman who had been friendly and chatty, asked me what I thought of the beer. "It's a touch cloudy" I said, "but tastes fine". His face clouded like my beer. "It shouldn't be. Have something else". I demurred, he insisted,  I chose Draught Bass and he went off to check the cask.

Outside it was hot and my half finished pint was starting to clear a bit. It had been a chill haze, albeit a quite severe one. Ah well.  The barman had done the right thing and I had a free pint. That's the way it goes sometimes.  As we sat chatting and watching a submarine, surrounded by escort vessels, slowly enter the navigation channel and make its way at snail's pace to HM Naval Base Faslane, I sipped my Bass. It was rich and malty, but really rather good. Oddly it seemed to suit the hot weather and as the afternoon slipped by, more Bass slipped down nicely.

It was pleasing to me that a beer with such a great past could still show its class and compete with a modern golden ale. Who'd have thought it?  Not me I admit, but it did.

The photo shows my pint before it cleared, which it did, though it took some time.  I also wrote about Draught Bass here.

There's still people who make the trip to the Express Tavern in Brentford - both regulars and visitors - purely for the draught Bass. There's now nine other real ales on handpump to choose from, but the Bass still sells well, as far as I know.

Draught Bass – one of my favourite beers from yesteryear. I haven’t seen it around, let alone tried a pint in ages. Just reading about it has brought back some happy memories, so I’ll be looking out for it from now on.

It's still a beer I make a point of ordering when I see it on the bar.

Ye gods, a beer that almost everyone seems to like but is hardly ever mentioned by the craft bloggerati.
I drink it wherever I see it which these days tends to be in the US and although not the same as the UK version it's still a very palatable slurp.
When I was in the rat race in that there London and often catching the last rattler home after a few after-work scoops nothing beat a couple of cans of Bass and a packet of Dunhill in the rare smoking carriage that South-West trains thoughtfully provided.
That red triangle has taken the rough edges off my life for decades.
Long may it reign as a top tipple.

I was drinking it last night in the Guest House in Southport. It still stands up against many of the modern beers, and can also act as an antidote to certain overhopped golden ales designed to rip your taste buds off.

Never a bad pint of Bass in my local, The Saddle in Blackpool, always very drinkable and loved by the locals.

It was a contender for our Golden Pints back in 2013, believe it or not. Two pubs in Penzance serve it in good nick, as does the Seven Stars in Falmouth. It's not so thrilling that we'd go out of our way for it but we generally enjoy it when we find it, though it's partly about sentiment for an old brand and a great tradition, &c.

The Tynemouth Lodge Hotel, Tynemouth (my office), has sold Draught Bass for nearly 30 years - it's always absolutely spot on (as are all the other beers). Volume has dropped off a bit but they still get through 3-4 barrels (36) a week. You can see it in the cellar here http://goo.gl/7z9u3I

Don't get me wrong but reading these comments it's almost like some people are ashamed to admit they like something that is still solidly old-fashioned and reliable.
Perhaps Bass ought to be rebranded with a minimalist font and served in twatty glasses at five quid a pop and it could become a retro craft beer for equally twatty hipsters
It's a great beer that doesn't ask for much except for a smidgeon of respect for its heritage.

All this love for Draught Bass does make one wonder why the brand owner has let it fade into obscurity cf. Pedigree. My thoughts http://bit.ly/1N2nkEB

Pedigree is an entirely different matter, I haven't had a pint if that worth repeating for longer than I care to remember. I've recently returned to Bass after having an outstanding pint of in a solid East Mids Bass pub, and realised the only reason it fell out of my favour was a combination of it becoming a dominant national brand at one time, with consequent loss of quality at POS, and the method of serve. I've never liked Bass served in the southern style, and the ultimate heresy, the 'Derby' serve, straight from the barrel, into an aluminium jug, thence to glass. I like it with a northern head Ta.