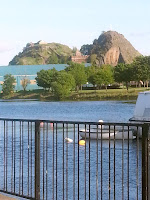 After a lovely walk in the sunshine through some of my childhood haunts including Levengrove Park, which is more or less unchanged since I was a boy and still kept very well, I crossed the old bridge back into Dumbarton and headed for our new local Wetherspoon which has the bonus of a beer garden. This is further "bonused" as it were, by being 90% non smoking. 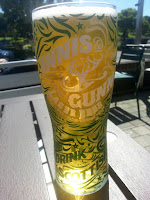 I was hot, the beer garden was hot, the sun was hot, so lager had to be the beer of choice, but I set myself apart from nearly everyone else by not ordering Tennents, which I observed, perhaps in an understated way, is rather popular in these parts. Being mid afternoon, it wasn't too busy outside, but there was a good enough crowd.  I sat, somewhat soporifically with a great view of the Rock and River Leven (see photo), being lulled into a state of torpor by choruses of "Aye" which is not only Scottish for "Yes" but has a wider meaning really. A bit like "genau" in German it is used where "exactly" would fit. There was a lot of agreement that afternoon.

Ah yes, the beer. It was Innis and Gunn Lager. Quite malty, but not over-carbonated, it was just the job. So I had two.

Dumbarton is where the Cutty Sark was built by Scott and Linton and completed by rival Wm. Denny when they went bust. Wm. Denny and another shipbuilder John MacMillan gave the land and the money for Levengrove Park.The park cost Denny and MacMillan £20,000 to purchase and develop in 1883.

I've heard reports that I&G lager is doing good business in Scotland as the more classy alternative to Tennent's.

I do like drinking real ale outside on a warm, sunny day as the sun seems to release the hop aroma. I think I've drunk one pint of lager on tap since c. 1973, and that was only because it was bought for me in error.

Mudgie. I think most of your smokers do so out front as the usually do.

Most beer gardens suffer from underuse in the terms you describe. It's the fecking weather innit?

If I ever meet you Nev, I'd buy you that 2nd pint of lout, anytime, you leftie nutter.

Ever make it over to Auchentoshan in Dumbarton Tandleman? Love their Three Wood Malt Whisky.