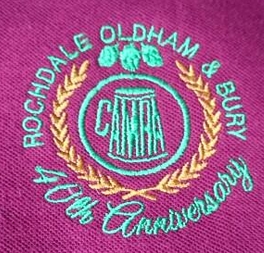 It was the CAMRA ROB fortieth birthday bash (yet another) last night. This time it was a curry - a ruby for a ruby. Geddit? We assembled for pre-curry drinks at the Regal Moon. My first choice as it always it when I see it on the bar is Hawshead Windermere Pale, full flavoured, hoppy and a mere 3.5%. If there is a better 3.5% beer in the country, I've yet to taste it.* It was a great start to what would be a great evening.

Next up was a beer about which much has been written and which at its best is brilliant, but which often disappoints. Jaipur India Pale Ale.  Now I tend to try Jaipur when I see it and can say that I usually feel good about it about half the time. I suspect that is little to do with the brewer and a lot to do with pubs serving it before it is really ready.  I have a habit of texting @ThornbridgeDom with reports, but last night I was too busy enjoying the occasion to do so. It was Jaipur at its best. Clear as a bell, precise flavours and surprising drinkability for its 5.9% strength. I bashed two down.

When we repaired to the brilliant Asia Curry House in Rochdale, there was little by way of choice, so I drank Cobra as you do in such places. Actually once it had lost a little of its intense carbonation, it wasn't a bad drink at all, and it gave the shiraz I also had a good run for its money as a curry washer downer.

So there you have it. Three pale beers and each holding its own in its own way. Beer. You just can't beat it can you?

*Actually there is another 3.5% beer even better though harder to come by. It is Iti an all New Zealand hopped beer from, well you might have guessed, the brilliant Hawkshead.  Brewing beer from water, malt, yeast and hops still works best and will never go out of fashion.
Posted by Tandleman at 10:30