While beer may play an increasing part in the lives of the urbanites of large Spanish cities, in the countryside it is more utilitarian than that, being a small drink of a quarter of a litre to have as a quick refresher, or just as an accompaniment to sit with while chatting.  In Gaucin, a white village perched high in the hills above Gibraltar, bottles of (usually) Cruzcampo were the normal drink of choice amongst Spaniards, while us Brits, when asking for a beer, were automatically given draft in thirds or half litres. 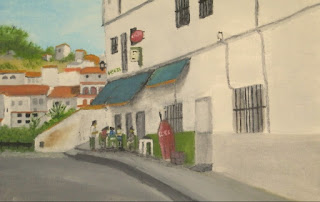 We didn't go to Venta Socorro much. It was underneath the village on the road leading to Ronda and while there was a set of tables, watching the traffic was about the best you could do, though the views upwards across the hills were splendid - and it kept odd hours. It did though have the local cake shop adjacent and was on a good spot at the end of our afternoon walks round the village in searing heat.  It wasn't always busy.

As we approached one afternoon though things were different. On the first table, there was a well dressed old gent with a cup of coffee and a crossword. The next table was empty and we sat down, looking on with interest at the five or six workmen, dusky from the sun, but tinged white with cement and dust getting stuck into the booze.  The old gent ignored us, but cheery "Holas" were shouted by the workers.  They'd obviously had a few, but their drink of choice was gin and tonic.  Now I like a gin, but we ordered tubos (33cl) and enjoyed looking on as the lads grew increasingly inebriated. As the conversation and banter flew back and forth a more gins went down red lane the drinkers grew more animated.  The old gent didn't look up at all, he just carried on with his business. After we'd had a couple of beers the crossworder got up and with a cheery flick of his paper as a way of saying goodbye to all, he was off. We followed a few minutes later and as we climbed back into the village, we could still hear the shouted conversations of the gin drinkers below and round the corner..

While it may not have been beer, I reflected that really you could imagine a similar scene in almost any local pub back home.

I didn't take a photo of the bar, but this painting by Jack McKenzie shows the place and is used in accordance with the terms on his blog.  Cheers Jack.  The coke bottle isn't there any more and the village behind has grown,  but the scene remains essentially the same.
Posted by Tandleman at 16:57