The Dog and Truck


I have written about this East End Boozer before and I finally got back to another visit a year and half after my last visit.  What's the matter with me? I'd forgotten how good it was obviously.

On my day off from the Great British Beer Festival we'd decided to give a new (to me) pub near Liverpool St Station a try. Because of  E's work we had to wait until nearly three pm before setting out and inevitably as we left the flat it started to rain.  Heavily. With considerable reluctance E agreed to sprint round the corner to the Dog and Truck, a couple of minutes from our front door.  She's been there for nearly 17 years and despite having visited almost every boozer for miles around - well I have dragged her to them including many long since closed -  she somehow didn't fancy it. 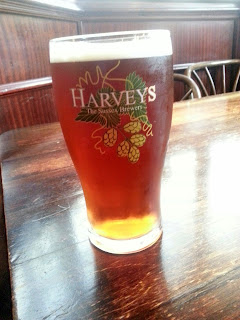 If you read my previous piece (and you'd best really) you'll see I liked it. It hadn't changed a bit since my last visit thankfully and despite its very old fashioned seventies look, it was warm and welcoming. A table of retired gents sat supping beer and exchanging jolly reminiscences, a fairly young lad, obviously taking a Poet's Day view of Friday was idly throwing underweight darts at the dart board and a couple of lads stood at the bar drinking pints of lager. It took me back a fair bit. The beers on offer were Greene King IPA, Black Sheep Bitter and Harvey's Sussex Bitter. I chose the Harvey's and it was excellent. Bright as a button, fully conditioned and served at the correct temperature. Excellent. The barmaid was friendly and when I called back for a second pint I remarked on how good the beer was. She promised to let the landlord know.  E, ever suspicious of London cask beer was enjoying her halves of Staropramen.

We sat for a while nattering and the darts player offered me a game. Now I used to play a lot of darts over thirty years ago, so I couldn't resist. The darts were far too light and I was hammered. Twice.  That took me back a bit too.

The Dog and Truck is at 72 Back Church Lane, London E1 1LX. It really is worth a visit and it will be on my list when I'm next in London. E said she'll come too!

I've looked ot my old darts. I'll bring them next time too. And the Harvey's was much better than my rotten photo suggests.

So it's not all shit? Happy days.

Excellent, a great experience in an unpretentious, non-crafty pub.

I'm glad you commented on the quality of the beer to the barmaid - it always goes down well.

Do you ever go to Pride of Spitalfields - used to have great beer & atmosphere but dropped out Beer Guide.

I am a recent Harvey's convert, having only really discovered it last winter. That photo just looks like it was a humid day and the beer was cool to cold, making the glass sweat. Don't feel too bad about it.

Why would I feel bad about it? It was in perfect nick and a great temperature?

A pub i've never heard of. Next time you're down let's meet there for a pint. Harvey's in good condition is possibly my favourite British beer.

A pint in that there London that wasn't shite. In the infinite wonder of the multiverse, all is possible.

Had some Harveys Best Bitter last week in The Lord Nelson, which is five minutes walk from Brighton railway station. Excellent stuff, although sadly overshadowed on the day by the ales in The Evening Star, a local Dark Star hostelry.

We'd intended to go to the Williams Ale and Cider House.

Ah ok, its definitely worth a look that one :) I almost added in my previous comment, my post GBBF pub find on the way home this year was the Williams Ale and Cider House, and given its locale to Liverpool St Ive no idea why Ive never found it before, other than its down quite an unassuming street.

But for a GK pub that close to Liverpool St I was impressed,the beer was very drinkable, the food menu looked quite good as well but I didnt have chance to try it. But its in the GBG, its Cask Marque'd and in the Craft Beer London app, I kind of think when a pub hits all 3, its the jackpot & got to be worth a look, and its not just GK IPA or whatever their latest pretend GK Craft beer is, though you can still have them, I had a Chelsea Blonde (keg) London Beer Factory and a Golgotha (cask) by Wantsum Brewery, both were very nice, and they had others as well

However I then went to the next nearest Nicholsons pub, and kind of wish Id stayed at Williams Ale and Cider House instead,so definitely next time Im in London Ill be using it as my pre-train pub home as you can almost see the station from it, and add the Dog and Truck as well, and the Golden Heart in Spitalfields which is just round the corner based on todays historic pub recognition

A bit late here, but thanks for this write-up. I took a note about this pub prior to leaving for a trip including London from the US in case we were in the area. We were around tower bridge so decided to take a walk up to visit and I'm glad we did.

After having left a more contemporary/polished place south of the bridge with good beer but lacking atmosphere, it was refreshing to come here. It was a nice day, so we enjoyed a quiet pint on the walled garden in the back. Harvey's was in good shape again too, and service was friendly. Would have stayed for more but we were going to visit Southwark Brewing later in the evening.

I get the impression that sometimes the usual brown bitters are regarded as boring, but they tend to be what I enjoy the most about visiting the UK - I drank quite a bit of Harvey's in London. Most beer was in good shape - nothing murky except for a dry-hopped Hastings beer that came with a warning at The Pelt Trader. Did get one round elsewhere that was as warm as tea though...didn't need a thermometer...

Thanks again for the tip - the Dog and Truck was one the most enjoyable that we visited on the trip.