A Quarter Ton of Hops 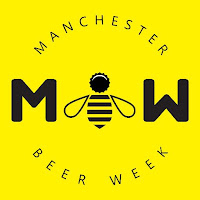 Manchester Beer Week to be held in June, has many different and attractive features, but will be underpinned by the brewing of an official beer, MCR FOLD. This beer, brewed by headline sponsors, JW Lees is somewhat improbably a collaboration between Lees, traditional to its roots and Cloudwater, new kid on the block and not in the least traditional.  What could possibly go wrong?  Well, nothing much actually.

My good friend Beers Manchester (Jim) has given his take on the brewing of the beer and also, thankfully, the facts and figures. I recommend you read his blog in conjunction with this piece to get the full flavour of the day.  So, who was there?  Well me and Jim obviously, me as Lees CAMRA contact and Jim, because Connor Murphy whose brainchild Manchester Beer Week is, asked him to come along. Completing this little posse was Paul Jones, Co-Founder of Cloudwater and James Campbell, Head Brewer at Cloudwater, and an old pal of mine. Our merry little gang was completed by Lucy Lovell from the Manchester Evening News, no doubt to put a bit of professionalism into the subsequent writing. 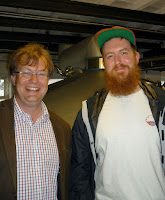 We met at the brewery gate and as we all knew each other (except Lucy) it was a cheery re-union.  We were greeted warmly by Lees marketing people - who I know well, so one up to me - and hence to - the Brewery Cottage (Lees Hospitality Suite) for coffee and to meet the brewing team from Lees led by Michael Lees-Jones, a family member and Head Brewer and Paul Wood, Brewhouse Manager.  The day was explained and without much further ado it was off to the brewhouse to start the brew. Now a recurring feature of Lees brewery, the main parts of which date back to the 19th century is a surfeit of stairs. We tackled these with diminishing enthusiasm as the day went on as we scaled them for the umpteenth time, but first time, we were like rats up a pipe.  The brew liquor had been prepared for a brew of around 180 British Brewer's barrels or, if you like, about 52,000 pints.  The malt was automatically added and we watched as under the control of Brewhouse Deputy manager, John Gillibrand, the numbers clicked away until the correct amount was added.  Then that was that for a little while as the malt, steeping away, started its work. 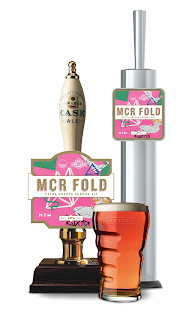 So what then? Bacon and sausage butties and a couple of pints of course. Although the pump clip for the beer was displayed on a handpump in the bar, clearly it wasn't available yet, but no matter. Climbing stairs is thirsty work and while it's unusual, for me at least, to have had two pints before a quarter to ten in the morning, in the circumstances, it would have been rude not to.  Not that any of us needed much persuasion. Perhaps not unexpectedly the majority of us had cask conditioned Brewer's Dark -  Mild to you and me - and despite being a former Champion Mild of Britain, relatively rare, even in Lees tied estate.  There was much smacking of lips. Bloody good beer that. Luscious, fruity and moreish. The Cloudwater lads were impressed. William Lees-Jones the Managing Director of Lees joined us and the brewers merrily chatted away. That chatting was a recurring feature, with the brewing teams from both breweries talking process and kit. Brewers love talking about kit and there was huge cheery grins on all the faces.  This was no forced marriage or marriage of convenience. Smiling faces were the order of the day.

So what else? We had a very comprehensive and well appreciated tour of the brewery. We scaled the outside of the highest conical and viewed the brewery and Manchester from on high (except Jim who isn't keen on heights), we added hops - lots of hops - more hops than Lees had ever put in a brew - and ascended and descended stairs to view yeast propagation, cellars, kegging and cask lines until the brew was ready to be transferred from the whirlpool to the fermenting vessel.  Now this was where John and Paul W had major concerns. A quarter ton of hop pellets leaves a lot of solids and even with a whirlpool as powerful as the Lees one, the worry was this would clog a system designed for the more modest hopping regime of JW Lees.  Thankfully it didn't and the transfer continued like clockwork until near the end when the transfer piping did clog and hop debris was drawn into the water heat exchanger causing a gasket to blow.  This was met by complete professionalism from Lees Brewhouse team.   Unfazed they stopped the transfer and while we retreated to the in-trade sample cellar for a beer, they sorted it out by dismantling the clogged piping and blasting out the blockage. The glycol heat exchanger would be used for the next brew until the cold water gasket was repaired by the brewery engineer. No problem and no time at all taken. I think they actually enjoyed it, but a few barrels were lost in the process which was a shame, as demand for this beer will be overwhelming.

So the beer itself? Jointly designed by James Campbell, Paul Jones, Michael Lees-Jones and Paul Wood, the beer is an all malt brew, bittered with Goldings and a little of the other hop used, Olicana.  Then, added in the whirlpool at 80 degrees C to eliminate isomerisation, a quarter ton of Olicana, hopefully bringing aroma and flavour rather than the bitterness the hops would have produced if boiled.  The final beer will be 4.8%  and though described as auburn, looked likely to be more mid brown if the wort is anything to go by.

And that was that. We all look forward to tasting the finished beer. But just think of it. A quarter ton of hops. Take that craft beer.

Olicana is 6.9% alpha acid hop developed by Charles Faram. It was first used in a commercial brew by Ilkley Brewery who named it after the Roman name for the town.

It really was pleasing that the brewers all interacted so well. Questions flowed like a river from Cloudwater to Lees and I'd love to see the reverse happen. Who knows, but I also hope Lees have the taste for future collaborations.

I was also present when Lees last did a collab brew - with Brooklyn Brewery - and watched Garrett Oliver pour the worst sparkled pint ever in the Brewery Cottage.
Posted by Tandleman at 08:25

I'd say it's very positive that such a collaboration is taking place.

I can imagine one or two zealots grumbling that it's also available on keg, though. The same people who want CAMRA to withdraw from Cyclops as it has been extended to keg beers and lagers.

Are there any plans to put it in bottle too?

There won't be enough of it for bottles and I doubt if there will be enough for much keg either. It will depend on orders as it will be available to all Lees houses (approx 160) for a month and will be in all of Lees managed houses (approx 35)

This likely will be immensely popular in the Manchester free trade too.

Zealots will always grumble. Bugger them.