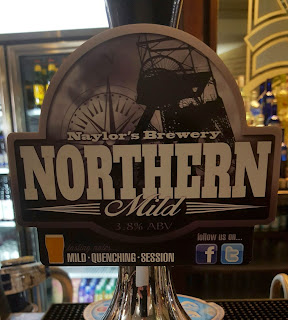 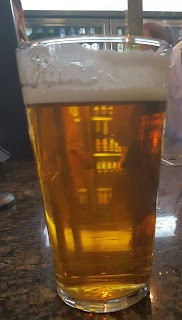 May is Mild Month according to CAMRA, so when I spotted one just coming on in the Regal Moon, I thought I'd give it a go.  Milds, these days at least, are dark. Right? Not so this one which was bang in the middle of in the golden ale ballpark and way off the usual dark brown to black.  It was, as John Torode might say, "a lovely, lovely thing." both to look at and to sup.

Naylor's hail from Yorkshire - Keighley in fact - and their beers are frequent visitors to the Regal Moon. Not hugely hoppy beers, but very well made and they usually have that elusive drinkability that many brewers haven't yet stumbled across.  Northern Mild was just such a beer. Malty and light bodied, it weighed in at 3.8% and was brewed, according to the brewery website, with Maris Otter malt, Crystal Malt and torrified wheat.  The crystal was thankfully well hidden and the beer itself was of the swoopable kind with the Maris Otter providing a deep biscuity lusciousness.


It was a shame I was driving, so one and a half pints was my lot. Recommended.

I do like a dark mild too, but haven't seen much of that locally recently, but the old boys in my local swear by Lees Dark Smooth.

The beer was crystal clear. Just my crappy photo that gives it the haze and it looked even paler than the photo shows.

Looks and sounds like a cracking pint - love a good mild and will be judging a pale mild competition over here in Virginia this week.

A light mild from Keighley you say? Hmmm, what does that remind me of...

I remember Boddington's mild being as pale as a pale bitter. It's a long time ago, but I think I quite liked it.

Why is May mild month? What is seasonal about mild?

Raw Paradox Light Mild 3.2% and Sarah Huges Ruby Mild in the cellar at The Baum.

Cooking Lager: the only reason for May to be Mild Month is alliteration. Logically, therefore, March could just as well be Mild Month too.

Should have come to Macclesfield beer festival where we had 14 milds on inc. Dunham Massey mild which sounds similar in that it was light. Sadly the "dark" beers sold *very* poorly with the milds accounting for 2.8% overall but with 72% wastage :-(

Sounds like something I would have really enjoyed. If there are no interesting guests or seasonals, I now tend to go for 1863 in Hydes pubs.

@Nev - I think at one point Boddingtons did brew both a light and a dark mild, but certainly in the 80s their only remaining mild was dark.