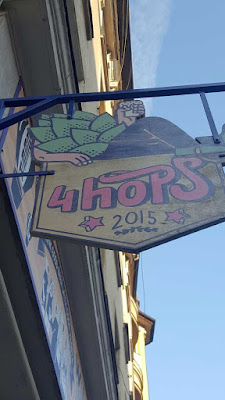 Too much Polish Craft  in fact.  Hopping off the tram, considerably refreshed already, we made for 4 Hops in an area  not far from the Old Town and very near our hotel. This was a busy and very pubby destination with a much more mixed crowd than the relatively young clientele at our previous location. That is, for once we didn't automatically double the average age of the customers on entry.  I liked it for that alone. Here we bumped into some more of our crowd and were able to ascertain with a modicum of accuracy, where others might be. Of course we made no use of this information whatever and after a couple made our rather wobbly way to Marynka, Piwo i Aperitivo where more by the fact we all had the same maps, we did indeed find some of our fellow imbibers.

Now don't get your hopes up here for a "aperitivo" meaning a sumptious Italian style free feast. Instead a few little tubs of this and that - think nibbles - were on the bar.  Still, disregarding that minor setback and glancing at the beer list, I noticed my nemesis was beckoning to me once again. Yes Dear Reader, Strawberry Milk Shake IPA.  She was as luscious and appealing as she had been earlier and in her enchanting way somehow buoyed me up for a later and un-needed visit to Stacja Pub - at least I think that's where it was. Either way it was heaving and had a great selection of Polish craft. I had something with Citra and something stouty, but things had gone well downhill by then. Of course it didn't end there though it should have. As we were just round the corner from our hotel, a quick visit to a rather posh bar was made, much against the will of a by then long suffering and reluctant E.  Once in, having knocked my beer bottle over twice, even I knew it was time for bed.

So what did I learn from this? Well, drinking lots of beer around 6% abv by the half litre over a long day is not really advisable. I should have known that really, but as they say, it seemed a good idea at the time.

I am desperately trying to recall if we ate anything. I have a feeling we did, but I'm not asking E. That would be inadvisable.

Thankfully I woke up with only the slightest of hangovers. A substantial breakfast and lovely walk in the fresh air with added culture, chased that, if not away, to a place that I didn't exactly notice. The next day involved Tankovna Pilsner Urquell. That was a good thing and I know I ate properly and drank a lot more wisely.

Nice to read your awesome blog!!
Great work and Thanks for sharing it with me!!
Please visit Dating Coach For Men