I've been busy and unwell, so this is a bit of a catch up. Outstanding Brewery used to be in my CAMRA Branch Bailiwick, but has recently moved from its rather old fashioned building in Bury to a new location in deepest Salford.  They had a bit of an open day for CAMRA colleagues and their own friends and family a couple of Saturdays ago, so me and the boss went along.

At E's suggestion we walked from Shudehill along the banks of the Irwell as this seemed an interesting way to go.  That was easier said than done as we had to make frequent detours to avoid the intense amount of new builds along the banks of the river and further into the interior. It was fascinating nonetheless to walk in a part of the area that I don't really know and as a bit of a railway buff I really enjoyed looking at the work being done on the Ordsall Curve which will directly link Manchester's Piccadilly and Victoria Stations.

After a couple of miles and an equal number of false starts we located the building, paid a tenner to charity and went in. Two rather large industrial units have been combined into one, divided by stairs to a podium with a bar and sitting area. In the first of these units is Porter Installations the constructor of many of the current crop of UK microbreweries as well as an increasing number abroad.  Run by the eponymous Dave Porter a brewer, brewery builder and much more, partly constructed brew kit could be seen, while Dave himself showing his other side, did the guided tour bit of the actual brewery, while the owner Glen, a brewer himself and ever amiable and I looked down from above. I am unsure of how ownership works out other than that each appears to have a small stake in the others business, while facilities are shared. Or it may be some other odd combination, but either way, it seems to work. The units have been purchased as the rental option was considered dead money. They are modern and flexible. I think Dave, as well as knowing everything and everyone, was an accountant. He'll have done the sums. That's a compliment. 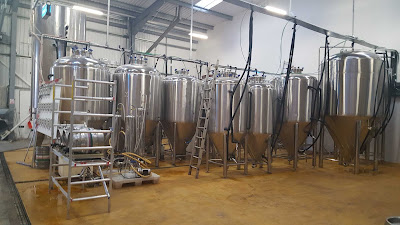 The brewery is large and fairly shiny and produces cask and keg beers. The bar dispensed several of each and while we both started off with a very, hoppy, light coloured Ultra Pale Ale - 4.1% I think, we ended up on Four, a clean, herbal, refreshing keg lager which shows what really can be done with this style. It is worth noting that while the keg lagers are filtered, none are pasteurised.

Nice guys that I have known for years, doing well and producing great beer is all this is about.  This is a simple good news story - apart from losing a great brewery from Bury that is.

The charity tenner got us as much beer as we wanted and a pizza should one be desired, but as usual at these things, it was just great to chat to beery people and talk beer to brewers.

We got the tram back to Central Manchester. In my usual cack handed way, I only took one photo. See the website linked above for more.
Posted by Tandleman at 14:18

Interesting brewery tour, in terms of financials - in certain situations it's definitely worth going the whole hog in terms of equipment - true control over process and high quality finish!