I had a lovely day out last Saturday with E. In London for the Beer Writers thrash and with some spare time on our hands and the rail strikes on Southern settled, we went to Lewes for the day - a long time ambition of mine - though E had done some work for the local council there, had been several times, so would be my guide.

The first surprise after a surprisingly long journey from Victoria is how steep the hill is between the station which lies below the town and the town itself. I found that out in a most unwelcome way, as my bad knee literally gave way on the one in ten gradient, or whatever this North Face of the Eiger alike, was. (It is bothering me still on stairs if nothing else.) After planting my nation's flag on the summit, we explored a bit. A long, quaint High St, dotted with individual businesses  both to left and right, so on E's recommendation we went left until the town more or less ran out, noting a couple of decent pubs on the way.  E explained the more modern part of the town - and that is very relative as it all was entirely delightful - was at the bottom of another steep hill, as was Harvey's Brewery. 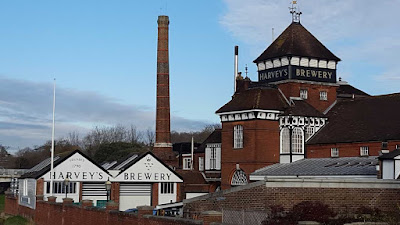 After a look at the castle - which dated back to Norman times - of course I didn't pay to go in - £17 my arse - we set off for the bottom of the town down another fearsome hill to admire the brewery and take the customary photo. Very picturesque, but a drink was required, Harvey's of course. A handy sign pointed us to the equally picturesque (both in looks and setting) of the John Harvey, Harvey's Brewery Tap. That'll do very nicely. As we approached on a cold but sunny day, I noticed that the hardy outside drinkers had plastic glasses. I assumed that was because of outdoor drinking and its fleeting mark on my conscious mind was dismissed.  Inside the pub is a delight. Low ceilinged, lots of wood, a bar with both hand pumped and gravity fed beer and a good buzz of conversation. I looked at the pumps. "A pint of Mild please" quoth I.  Mine host, a cheerful young fellow replied "Is a plastic glass OK?" I'd rather not said I. He looked a bit embarrassed and replied that it was all plastic glasses. Hmm. Now I dislike plastic glasses intensely. I dislike even more those that are so flimsy you need to carry them with two hands. I politely declined and we left. For me it was a point of principle.

Settled comfortably in the Dorset round the corner with a pint of Sussex Pale in a proper glass, we wondered what the reason could be. Now Brighton, just down the road were playing Liverpool at home and we had see the odd Brighton fan waiting for a bus or walking about, but none were in the John Harvey, which frankly was rather a posh gaff with rather a posh clientele. Surely that couldn't be it? Bloodshed, or the potential for it there, seemed highly unlikely and we hadn't seen and didn't see a single policeman in the whole time we were there. A mystery. 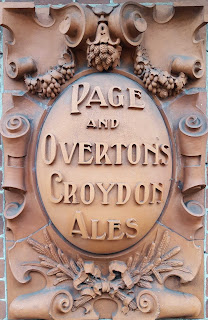 After a bit of light shopping and a few more pubs - all of which were served in glass - we made our way to station and a last pint or two. Our destination, just across from the station was the Lansdown Arms, a proper bustling pub of character.  It was heaving with returning Brighton fans, still groggy after a good hammering.  We found a seat and got into conversation with two philsohical supporters of a similar age to ourselves. We asked about the John Harvey as we supped our beer, again from a proper glass. They didn't know why there was plastic either.

I recommend Lewes highly. We enjoyed the Dorset, even more the eclectically decorated Snowdrop, our "tea" in the Brewer's Arms - a splendid throwback to the seventies in every way including the menu - a quick visit to the old fashioned Rights of Man and our final pints in the Lansdown Arms, but the John Harvey left a note of disappointment which still lingers.

Plastic glasses in a brewery's showcase pub? I don't think so.

The pubs in Lewes are old fashioned in a really good way, though I have to say that the Harveys seemed better in the Royal Oak in Borough.

We bought some fancy cheese and E, a devotee of Seasalt, Cornwall, a pair of trousers.  Everybody happy then.

maybe the glass washer had broken, can happen occasionally, the fact he asked if you were ok with it first, rather than just serve first ask questions later, suggests to me at least its not like the normal restriction style of thing, and not that it helps as it was 5-6 years ago since I last went, they were definitely using glasses back then.

I'm off to Lewes next weekend and looking forward to it more after reading this. Hoping to visit the John Harvey - I see Brighton are at home then as well, though it might be Sunday I get there. Not a fan of plastic either and it certainly isn't good for the environment.

How weird, was in the John Harvey several weeks back, proper glasses all round, in fact been there several times and always had proper glasses.

It's a funny old world.
You walk away from one pub " on a point of principle " because of the use of plastic glasses yet agonise about whether to complain about a poor pint which you can't finish in another.
Get a grip man !

Plastic turns you into a woman as well. Unless you already are one.

The plastic thing could very well be due to crowd type/size etc.

Retired Martin had a post about this and after a comment by me he figures it might be due to the size of the venue and what type of crowd it is:

Spot on...no pub ever has benefited from serving beer in plastic glasses

We’re sorry to hear about the use of plastics at the JHT and this isn’t standard practice for the pub. Due to being a member of staff down, combined with a busy service, the turn around on collecting and washing glasses wasn’t up to their usual speeds. This is rare occurrence for the JHT and they hope to be given another chance to serve the best Harvey’s beer in it’s appropriate glassware.

I am glad to hear that you had a great time and hope that the above didn't dampen spirits!

Thanks for that. Will of course call in next time. Thanks too for being constructive and not being defensive about it.

Paid a visit to the John Harvey on Saturday evening and enjoyed my visit, full glassware in circulation you'll be pleased to hear. Must return as didn't visit any of the other pubs you mentioned, the Lewes Arms and the Gardener's that I did manage later on were a couple of the pub highlights of the year for me.

Odd though that he couldn’t have said “Sorry, we’re so busy we’ve run out of clean glasses – is plastic OK?”

Was at the John Harvey last year and the beer was spot on. About as good as cask gets.

If he'd said you have to wait a few minutes fior glas or have platic, I'd have gone for that. It still isn't good enough imo.

Hello
I Read your article. Thanks for sharing such beautiful information, you wrote really very well, I really like your blog and information provided by you, and I hope you will share some more info about Plastic Wine Glasses. I appreciate your work, you did a great job.
Thanks