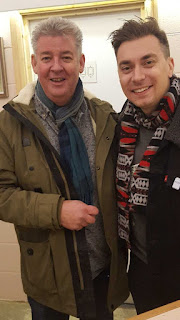 It was the coldest night of the winter so far when E and I made the half hour walk from our flat in E1, across Tower Bridge, at this time of the year mercifully, virtually tourist free, heading to Enid St in SE1 to give the newest Cloudwater Taproom the once over.  We bickered our way merrily along through dodgy looking streets, though having been that way before, it is less dodgy than it appears. As often is the case of our minor disagreements, we were violently agreeing with each other; the difference in our preferred navigation being about "along one then over a bit", or "straight along and over a bit less". Such are the vagaries of thirty odd years together.

The  Taproom is in a railway arch, brightly lit and narrow, with a cold store at the rear to keep the beers cool (certainly not needed that night) and for off sales. There is a bar, bottom right with taps at the rear in the usual craft style. A number of beers - ten or so -  were offered in various sizes, all at £4 a pop.  Waiting for our companion for the evening, beer writer, Matt Curtis, we started with a very decent Helles Tettnanger which was bang in the middle of the helles style and on a warm day would have been even more pleasurable.  On Matt's arrival, we tried a few of the others with varying degrees of success. I liked the lightly smoked IPA - or maybe it was just pale ale, quite a lot, thought the Cranberry and  Papaya Sour both smelled and tasted likely mildy gone off Vimto. Okay if you like that sort of thing, but worth £8 a pint? You tell me.  Nothing really grabbed me, well, not quite true. The cold did.  Like a vice. My hands were freezing as some acquaintances from The British Guild of Beer Writers remarked as they shook hands. It was bitterly cold and I worried for the barstaff. How cold? Well, frankly it would have caused Ranulph Fiennes to check his fingertips and cuddle his husky a bit more tightly. Maybe I'm just a bit nesh though. 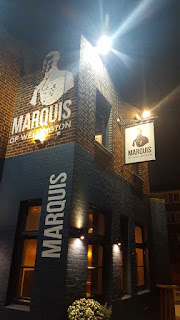 Which brings me on to another point. What's the attraction of a bitterly cold railway arch with the sort of beers on sale that you can get elsewhere for around the same price, but in relative comfort? Beats me really, but there were quite a few people there on that cold Wednesday night.  I have been in this neck of the woods in summer and sitting outside people watching - if you can get a bench or whatever - is pleasant enough, but so is sitting outside a proper pub.  For me these kind of visits are an occasional "something different" thing, but I know for others it's a way of life and how they like to drink. Sure beats me, but as I say so often, in craft related stuff, I'm not the target audience. But in this visit at least, the company was good and of course beer - as it usually does - and this is what really it is all about - engendered the social lubrication that enhances and tranforms an evening out and makes your surroundings much less important than the people you are with.

We left eventually and having spotted a pub, new to us, along with Matt, we popped into the Marquis of Wellington to be immediately enveloped in warmth in a virtually empty, but very pleasant pub. The beer was pretty good too, so we'll be back.

This isn't a pop at Cloudwater. As railways arches go, this was a very nicely appointed one, with attentive and helpful barstaff. I'm sure we'll visit now and then when a trip over the river to Bermondsey beckons. (Or Bermo as nobody but Cloudwater calls it.)

Thanks too to the lovely folks from Duvel-Mortgaat for their surprise company, the excellent chat and the beers.

'Nesh'! Ha, the only other person I have ever heard use that word is a lad I used to work with from Stockport. Top bloke, loved a good pint of best.

Nesh is a commonly used word around here (South Cheshire and Shropshire). Not sure how far its usage spreads. I've heard it used in Stoke as well.

There is still a minimum temperature of 16C for workplaces. Perhaps the bar staff should get on to their union.

After giving them more chances than many other breweries have had from me, I have reached the conclusion that Cloudwater are just not very good at making beer. Did your lager have a head on it? That would at least be an improvement over the last time I tried it.

Access to computers and other control systems which might provide you with information about the way the world revolves around technology should be unlimited and total. All information should be free and accessible to all. Seeing how you are being monitored by most of these tech companies. And also needing cyber help in many areas of your day to day activities, we at INTEGRATEDHACKS have come come up with a team of highly motivated and dedicated hackers to help you get access to information you are being deprived of and also protect you when necessary. Our services include and are not limited to hacking of social media accounts,email accounts, tracking of phones hacking of bank cards and many more.
Have you ever been hacked? Need to recover your stolen account, Want to monitor your kids,spouse or partner, Change your school results, track messages from an email or mobile number, secure your email accounts, phones, bank accounts and many more, INTEGRATEDHACKS is the one for you. Hundreds of our clients have their jobs done consistently and efficiently in no time. Our professional hackers for hire team is highly qualified and can hack anything or device you desire without giving the target any form of notification which makes us one of the best.
Are you having doubts about your partner ? Worry no more. All your doubts would be cleared.


★ Contact Us today For Your Desired Hacking services via : integratedhacks@protonmail.com and experience cyber hacking like never before.