No Craft Cheer in Malaga


It is an opinion that some won't agree with - controversial maybe - but I've usually found craft beer bars a bit samey.  All shiny and sharp surfaces like Gordon Ramsey's kitchen; industrial chique instead of comfy decor; a stainless steel wall of taps and the barstaff's backs for a view. The Americans, as always, have a lot to answer for, as have their unimaginative worldwide copycats. Why can't we have some more craft bars with individual character?  Nonetheless being a reluctant democrat in such things, I sometimes find myself in them, usually with gritted teeth and quite often wearing, if not a sulky expression, a boat that shows faintly concealed resentment. 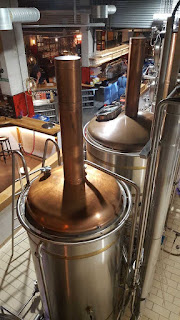 Thus it was in Malaga a few short weeks ago. I and my companions, (E excluded), had dutifully jotted down the must visit places of the crafterati and round them we traipsed.  I think we went to around five. Six if you count the visually appealing Cruzcampo Brewpub,  La Fábrica - a magnificent and brilliantly designed space with decent snacky food and a very shiny brewery producing slightly boring but incredibly competent and faultless beers.  In each bar, the same odd tasting take offs of beer styles from abroad. A muddy pale ale, a wheat beer, an overhopped, unbalanced IPA, a badly made porter and some murky one off, masquerading as a saison or a NEIPA (interchangeable in their awfulness and who knows how they should taste anyway - the brewers clearly don't? It made you shake your head with wonder that any brewer worthy of the name would let the bloody stuff out to trade. And always, well very nearly, an amber beer that everyone tries and then pulls a face at, before wondering why brew this insipid style at all?  The only saving grace really was, here and there, an Imperial Stout, so alcoholic, dark and dense that brewing faults were disguised to the point of non detectability.

Was I just unlucky? Is it just Malaga? I don't think so. While undoubtedly more competently made beers were to be found in Barcelona with the same friends last year and without them in Berlin, earlier this one, the general samey picture didn't change.  And why anyway for goodness sake, would you want to replicate abroad the experience you can find in any craft beer pub in Manchester, Liverpool, London, New York and everywhere else? It's the modern equivalent of demanding sausage egg and chips or pie and beans, no matter where you are in the world.  You pay top dollar for the experience too. That at least is consistent the world over and is the one thing that can be relied on. 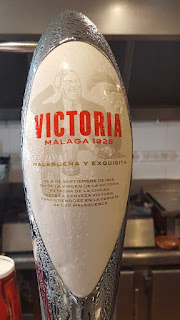 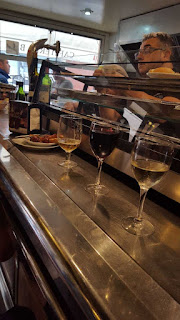 Having said all that, Malaga is a great city to go to. Just get to the real Spanish bars around the giant market or anywhere away from the very touristy centre and you can have a great time in traditional surroundings. El Cid by the market was small and not at all self concious. Our entry caused no wonder or resentment at all and as we perched in a corner, four little tapas were presented with a smile. Victoria beer and the house wines were damn good too.  In fact cheery little bars on every corner, even on main roads in the city centre, were a feature of the town and away from other visitors you certainly got a feel for the vibrancy of them and the way they are used by locals. Welcomes were always warm too, unlike the general indifference of the craft bars.

So what's the lesson? If you are a fussy old duffer like me, when abroad just visit local pubs, drink local beer and wine and mix with local people.  If you want to drink craft - carry on, but don't expect it to be much different from home as an experience.

Interesting too to compare basic Spanish beers. Least liked were San Miguel, Mahou and Cruzcampo, though none were bad. Very much liked were Victoria and the lovely and gluten free Estrella Galicia.

Funnily enough in the tourist centre some excellent house wines and great grub can be found at very reasonable prices. Gambas al pil pil? Yum yum.
Posted by Tandleman at 13:18

The same is true in this country, of course. Your typical fashionably distressed craft bar, and its beer range, could be anywhere.

I don't 100% agree on this - strong local craft beer scenes sometimes start to develop distinctive character in subtle ways, and if craft beer is your jam then it can be interesting to see where exactly they're going with it. Agree that there are often plenty of more interesting options for a tourist, though. And as ever it's worth remembering that craft beer bars in Spain aren't just for the benefit of British tourists any more than pizza places in Manchester are targeted at visiting Neapolitans...

On the decor - I'm seeing that bare brick / distressed wood / filament bulbs / faux vintage type aesthetic everywhere from trendy barbershops to new Starbucks to budget hotel chains these days. It's got to the point where if I see it in a place advertising "craft beer" then I assume that it's some corporate effort where they've bought the decor (and probably the beer as well) by the yard. And apart from brewery tap rooms, where it kind of comes with the territory, it's actually far from ubiquitous in the sort of UK places that beer geeks actually care about, which are just as likely to look like the Grove in Huddersfield or the Craft Beer Co in Islington.

When you go to Northern European cities, they may be serving the usual guff, but they do have traditions they could draw on if they tried - Gose in Leipzig, Luyks in the Netherlands, Lisle Blanche, Kveik variations in Scandinavia/Baltic, Berliner in .. well .. Berlin. In Spain, is there a tradition predating pilsner?

Did you try Cerveceria Arte Y Sana in Plaza de la Merced?
They had a very good selection of Draft and Bottled craft beers when we were there a couple of years ago.

Peter just xatching up with this but bare bones ir industrial chic has honorable British artisan beer roots. Remember the Firkins and David Bruce? He influenced ait of visiting Yanks and Canadians.

Doing this on the run.