One Reason Why CAMRA Hated Whitbread


When I was interviewed recently by Laura Hadland, who is researching and writing the official biography of CAMRA, ready for their 50th anniversary in 2021, she asked me the question - and I paraphrase - "Why does CAMRA hate Whitbread?"  I sort of stumbled through an answer, pointing out its record of taking over and closing breweries, its poor commitment to real ale and a general feeling that they didn't really give a monkey's chuff about beer and pubs, just about making money - which while fair enough - was generally perceived as being done in a more than somewhat uncaring and contemptuous manner. 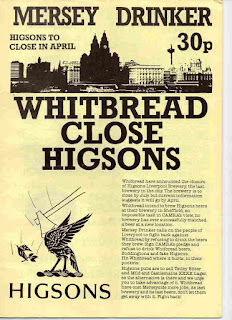 Whitbread was founded in 1742 and was once the largest brewery company in the world. It was a very acquisitive brewery and among others, it took over and closed leading regional breweries such as Lacons, Rhymney, Threlfalls Chesters, Strong, Brickwood, Higsons and Boddingtons.  Quite the record.  There were plenty others besides, but these were the big ones. The ones with lots of lovely tied houses.  CAMRA once sold a T Shirt with the names of the deceased breweries listed. It was entitled "Whitbread Tour of Destruction" I remember having one.

When it came to Merseyside, Whitbread weren't thought of highly. They had many pubs, often large, acquired from the Threlfalls takeover. Threllies was much loved and I believe that this sentimental regard for them didn't stand Whitbread in good stead to say the least. They closed the Truman St Brewery in Liverpool in my time there (1982). This was the old Threlfalls Brewery and while it rarely produced real ale, it was a well esteemed link with the past. As we shall see, Liverpudlians don't like to lose their breweries. 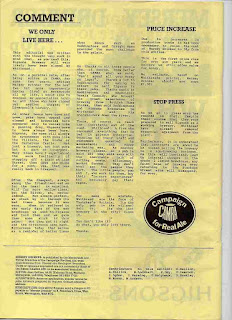 Now, one of the things I've been doing in lockdown, is to publish a piece of breweriana each day on Twitter, chosen from my modest collection of papers and artefacts.  I have plenty stuff from my Liverpool days, so I had this particular subject in mind, but felt it needed a bit more than a Twitter post. This piece is it.

One of the many unseen and unwanted outcomes  of the Beer Orders saw the Higsons Brewery in Liverpool, fall into the clutches of Whitbread.  It didn't survive that experience for long, but CAMRA in Liverpool had plenty to say about it. Scathing would be an understated and piffling description of their feelings.

(As a major aside, the Beer Orders had many unexpected consequences for the British brewing industry, many of which reverberate through time to this very day.  If you want a prime example of the law of unintended consequences, look no further than what happened next and is still happening.)

The closure of Higsons was just after I left Liverpool for Manchester. Many of those listed in the Mersey Drinker attached (1990 but undated dammit) were my colleagues in Liverpool CAMRA. The magazine excoriates Whitbread in no uncertain terms and is a paean of contempt for the company and all it stood for. The whole issue is devoted to putting into action the words of the editor with a massive call to arms. Boycott them! Don't drink fake Higsons brewed in Sheffield! Avoid their pubs and beers (including Boddingtons and the Boddington Pub Company too, who owned the former Higson's pubs) and much more.  Thousands signed an anti Whitbread petition. It was campaigning in the old-fashioned way and maybe the last hurrah for such direct action

All to no avail of course. History doesn't work that way, but when you need to know why CAMRA hate Whitbread, start by asking in Liverpool. They'll tell you.

Higsons was briefly brewed in Sheffield. I recall it was blended with Liverpool brewed beer, then the Liverpool content removed. A shadow of its former self, it ended up in Castle Eden in Durham, where all pretence was abandoned. It was now  just a beer called Higsons. It wasn't Higsons at all.


In the same issue it was noted that Whitbread would also close The Fremlins Brewery in Faversham. Whitbread exited brewing in 2001 and are still going.

Click images to read in full.
Posted by Tandleman at 14:21

There was also the "Whitbread umbrella" which arguably protected some companies such as Marston's from being taken over by someone else.

But the thing that strikes me about these old-school CAMRA rants is that some of the writers genuinely seemed to believe that Whitbread and others were doing it out of active malevolence. Ditto Punch and Enterprise today.

I guess these were different times. The Whitbread umbrella was a mixed blessing. Sort of appeasing the tiger in the hope it eats you last.

Of course Higsons fell into Whitbread's lap via Boddingtons.

Interesting, this was very much the focus of my interview with her (as Mersey RD)

Ironic that since they sold Costa to Coca-Cola, Whitbread is now effectively just Premier Inn. I'm not quite sure if they own Beefeater and Brewer's Fayre, but they are not proper pubs anyway.

I think most companies under the Whitbread umbrella which Whitbread didn't take over have now gone. As for the beer orders. Love or hate the original large brewers, at least they looked after their own pubs, and put their own name over the doors. Most current large pub owners seem ashamed to admit they own their own pubs. Even Heineken dont put John Smiths, Fosters, Heineken or Caledonian on the pub signs....

Indeed they did. Not a glorious time.

We are a very broad church now.

You want to go back to rants about "Thatchers Britain" CAMRA Mags are boring now. Nothing gets a criticism as it's paid for by advertisers. Put some teeth back in to it !

If only I knew a magazine editor to bend his ear.

Here's the chance to show you're not all mouth and no trousers. When Opening Times resumes publication please take this as an invitation to write something.

Well Cookie, I doubt any editor could give you a cast iron guarantee there. The offer still stands but if you're looking to wriggle put of it that's fine.

As I understand it, throughout the 1950s to 1970s(?), Whitbread only ever took a stake in another brewery at the invitation of the brewery itself.