A Hell of a Good Beer 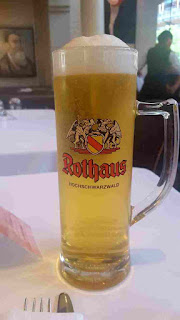 Last time I was in London, I had a couple of pints of Camden Hell and enjoyed them. I especially liked the little stubby glass. If ever there was a glass to make one neck one's beer, this is it. Well done Camden Brewery.

Wind on over six months later, and after a couple of pints out on the first day of our visit - see previous post - I fancied trying it again. But first we had lunch. I'd booked us into the German Gymnasium at King's Cross, which proved to be an excellent choice.  This purports to be the first purpose built gymnasium in the UK - or something like that - but I rather fancy the Romans had a go at that a long time since. No matter. It is a fine imposing building with a large bar and tables downstairs and a galleried restaurant above.  Surprisingly the choice of German beers is a bit limited, but with most of them coming from Rothaus, I wasn't complaining.  Pricey enough - but hey, I don't eat out that often - certainly well below what E aspires to - so bugger the expense and well worth the cost for both food and drink. 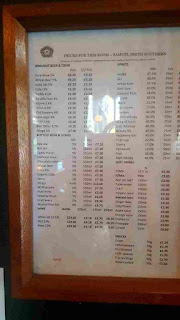 We followed up with a trip to Soho, figuring out on what was a fine day, we'd get plenty of chances to drink outside, but first there was a mission to accomplish. A visit to a Sam's pub to establish London prices following the recent price increase. We chose the John Snow as it was near E's old office, and she could do the sentimental journey bit.  It's a nice little boozer and trade was steady on this Wednesday afternoon.  I had the stout, which needed the gas changing, while E had a half of Pure Brewed. The price list was snapped when the barman wasn't looking and duly posted to a certain Curmudgeon. Prices are on the wickedly high side and now by no means a bargain. It does make you wonder how they'll compete on this basis.  One other thing. The notices forbidding this and that, which are found all over Northern Sam's pubs, are conspicuous by their absence. I know. I checked everywhere. Double standards from Mr Smith it seems.

I won't bore you with a list of pubs, but we wandered round, drinking Camden Hells, which was everywhere, always at prices North of six quid a pint. We sat out mostly, but where we couldn't, Covid-19 checks were evident and stringent, especially it must be said at the Greene King operated Crown where a Covid-Monitor and the manager virtually sheep dipped us. Overall Nicolsons pubs managed best in combining atmosphere with safety, so well done them.

Now I mentioned at the start that I enjoyed Camden Hells. That didn't change through quite a few pints. It really is a good drop of lager, even if it is a subsidiary of ABInBev. I have heard though to get it in as many places as possible,  it was offered at rock bottom prices. Well, maybe so, but those certainly weren't passed on to the customer in any way.

We left Soho around half past five when they were starting to close off streets and bring out tables for evening boozing.  They were filling up as offices chucked out, though the area was by no means that busy. I wonder how they are getting on now in Tier Two?

I didn't steal a Camden Hells glass. I am too old for that sort of caper, but I do like it.

Do try a pint of Rothaus in the German Gymnasium.  You'll pay little more than in some scabby King's Cross pub, but get a much better experience -  if you like a bit of class now and then.

Apologies for the poor quality of the Sam's photo. It was very bright in the pub. Click on the image and you'll get most of it. Some prices are eyebrow raising and I doubt if you'll see the cheaper beers very often , if at all.

if a beer glass falls into your missuses handbag is that really stealing?
it's an error, and not one worth returning to correct.
simply apologise to the missus for getting dregs over her stuff and crack on, imv.

AIUI card payments are accepted in Sam's London pubs, and the mobile phone ban is not as strictly enforced. You can now use your mobile phone to scan the NHS app, of course.

Were Sam’s London pubs ever as cheap as the northern ones? Must be getting on for 15 years since I was in one but I remember back then being shocked at the price of the bottled beers. Can’t remember what the draught cost.

No, but by London standards pretty reasonable. The bottles have never been cheap, even in the North.

Interestingly, Humphrey didn't increase his free trade prices by much at all so their beers and lagers are often still a bargain in his free trade outlets where they can price competitively and still make more margin than on more mainstream beers.

I enjoyed a Stein of Rothaus in the German Gymnasium - a lovely drop.

I recently paid £4.20 for a pint of their 5% organic lager in the Anerley Arms, which seemed reasonable. I also had steak pie with peas and mash, which was excellent.

However, how can independent pubs and smaller chains compete when 'Spoons in Penge is selling Ruddles at £1.29 a pint and Doombar at £1.49 (both I have to say in good nick and - unfashionable though it maybe - a pleasant old school alternative to our current obsession with well hopped beers).

Ian. £2 a pint more in London is a whopping difference.

Good news this is to everyone out there with different health challenges, as I know there are still a lot of people suffering from different health issues and are therefore looking for solutions. I bring you Good news. There is a man called Dr ehiaguna a herbal practitioner who helped cure me from HSV (2), i had suffered from this diseases for the past 5 years and i have spent so much money trying to survive from it. I got my healing by taking the herbal medicine Dr ehiaguna sent to me to drink for about 14 days . 3 days after completion of the dosage, I went for a medical checkup and I was tested free from HSV. all thanks to God for leading me to Dr ehiaguna who was able to cure me completely from this deadly diseases, I’m sharing this so that other people can know of this great healer called Dr ehiaguna because I got to know him through elizabeth who he cured from HIV. I was made to understand that he can cure several other deadly diseases and infections. Don’t die in ignorance or silent and don’t let that illness take your life. Contact Dr ehiaguna through his email  drehiaguna@gmail.com You can also whatsapp/call him on:+2348073908953 . Visit his website  https://effectiveherbalcurehome.blogspot.com/   He cure all forms of disease {1}HIV/AIDS {2}DIABETES {3}EPILEPSY {4} BLOOD CANCER {5} HPV {6} BRAIN TUMOR {7} HEPATITIS {8}COPD{9} SICKLE AND ANAEMIA.etc Be kind enough to share as you received.