Holden My Own in Bridgnorth

I had a little trip to Bridgnorth last week accompanied by E.  We had arranged to meet friends there and of course, travelled separately, ensuring as much as we could in these confusing and restrictive Covid-19 times, that we obeyed the spirit and hopefully the letter of the Government's decrees/ rules/law, as we (more or less) understood them at the time. This did cause us a little soul-searching coming as we did from an area that has a lot of infection, to an area that had hardly any, but as we were all well and trips away have been few and far between and likely to become even fewer and lot further between, we thought "Bugger it" and went anyway.

I was the only one that had been to Bridgnorth before, but my tales of Black Country beer, cheese and onion cobs the size of a baby's head and pork pies convinced them that this fine market town in Shropshire was the place to be.  To sweeten the deal we stayed at the Golden Lion, run by Holdens Brewery, so what could possibly go wrong?  Well, nothing actually. This is a tale of more or less unfettered joy. Of ale supped and food scoffed.

The advantage of the Golden Lion is that it is on the High Street and therefore bang in the middle of town. The other advantage is that it has a car park with space dedicated to each of the letting rooms, though it did take a couple of sweeps round the one way system before we worked out how to actually access our berth.  Our friends arrived more or less at the same time and after checking in, we generously gave them the nicer room. Theirs was designed by Jay Blades of Repair shop no less. Ours was Platform 3 and was railway themed, but big and comfortable. We chucked our stuff down and a few milliseconds later, we were in the bar, where rules were quickly explained, hands sanitised and pints procured.  Now the thing is about Black Country beer is that one tends to see it through rose-tinted glasses. My first sip rapidly turned into a gulp, as did those of my companions. Suffice to say that Holdens Bitter lived up to my memories (though in fairness, it wasn't that long ago I last had some).  Needless to say we had a second before exploring on a gloriously sunny afternoon.

Bridgnorth is a thriving place we noted, as we wandered aimlessly along. Local shops abounded. A baker and a butcher set the tone, but we needed food.  The White Lion promised home-brewed ales, pies, cobs and Scotch eggs, but on a Tuesday lunchtime, was rather understocked.  John had the last pie, while we settled on rather untraditional soft rolls with cheese and onion. Sadly too, the local ales were a tad underwhelming, but the sun was out as we sat in the pub garden, so all was well.

I'd promised everyone they'd like the Railwayman's Arms at Bridgnorth Station, home to the Severn Valley Railway. The beer was fine, but inside had been so Covid sanitised as to have lost its charm for me, so we sat outside while a steam locomotive, chuffed away, providing the classic steam smells I grew up with. On the way back into town we popped into the Joules owned Shakespeare, where the beer wasn't brilliant to be honest, but the pub was rather nice. Incidentally, I'd been warned Joules beers aren't going through a good patch. Make of that what you will. 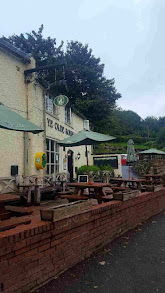 I won't continue to bore this pub crawl as it were into evening or the next day. Suffice to say we visited a horrible Marston's pub in Ironbridge and recovered at leisure in the splendid Old Robin Hood, which is another of Holdens small number of pubs. On a wet afternoon it was warm, welcoming and Covid-19 compliant. The bitter and Golden Glow were on top form. And they had proper cheese and onion cobs at £1.50 a pop.  The two and a half hours until the next bus flew by and the beer flew down eager throats.

So what's the point of this? It's a kind of good news thing really. It is about Holden's Brewery, their splendid beer and their safe and hospitable offering. In these very difficult times the way they ensured safety while minimising the negative effects was outstanding. And the beer really hit the spot.

We also met the most helpful bus driver ever, who not only left her break to show us the needlessly complicated Ironbridge bus stops by personally walking round the corner with us and confirming the next bus time.  Arriva, you have a great asset there.

I have been to Ironbridge a few times. It is always pissing wet.  And dead. I'd forgotten that. We'd have gone to the Coalbrookdale Inn, but it didn't open until four. We were in the Robin Hood on the outskirts by then.

Whenever I worked in Telford (yes I know) I used to stay for the odd night in Bridgnorth in the Golden Lion. The then landlord is sadly demised, but it's a great pub and the one way parking system is "interesting" to say the least. You don't need to go all that way to taste Holden's though. The Pint Pot has Golden Glow on now and Holden's Best last week. Just had a pint in the last hour as well. You might be able to guess who ordered the beer Peter. :-))

My home town. I grew up drinking Marstons Pedigree in the Bell & Talbot, back when Pedigree was good.

We were always told (and boasted) that Bridgnorth had the most pubs per head of population in England. But I've heard other places make that same claim.

While you were in Ironbridge it's a pity you didn't get to try the Coracle, a fantastic micropub a stone's throw from the bridge itself.

Next time you're over, it's worth a trip over to Shifnal. It's a small market town that punches well above its weight in terms of pubs. The Anvil, The Plough and - in particular - my local, the White Hart, all have excellent reputations. The White Hart has won the local CAMRA pub of the year for several years running.

You mention the "Severn Valley Railway". Do Bathams still have a bar in the station near to Aggborough Stadium ?

Pleased to see some praise for Holdens, often overlooked amidst the Bathams love-in ! Their Golden Glow can be average but when it shifts quickly it's magnificent.

The King and Castle... not a Bathams tied pub but always has it on.

We had a news item about the plight of pubs in the new lockdown. It had an interview from the Old Chapel in Gornal..... reminded me how good Holdens can me.

Outlandish "laws" should be ignored both in spirit and in practice. Collaborating with a government of shysters and liars will only speed the introduction of yet more senseless restrictions on our everyday lives.

Good to hear. Let me know when it is next on.

Agree with Mappiman on the Chapel House in Lower Gornal; the Holdens Bitter there was the best I've ever had last year.
https://retiredmartin.com/2019/04/30/thats-entertainment/