There are over 2,500 breweries in the UK and when you add imported beer to domestic output, there are over 10,000 beer different brands on sale in the UK.  This should be seen against a background of falling consumption, so given this plethora of choice, how, in such a crowded marketplace, do you nudge the customer to pick up and look at your product over another, and more importantly, buy it.  In his latest book, Beer by Design, beer writer Pete Brown sets out not only to tell us what processes are involved, but to explain and decode the hidden subtext of beer labelling. 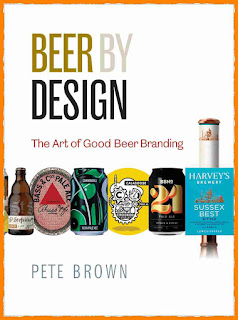 Firstly Pete explains that visual marketing is everywhere and despite our best efforts to deny it, we are all influenced by it to some degree or other.  Beer is no different. What makes you choose? Well in short, in addition to what you already know - your personal preferences, strength and so on make up a part of it - but also, more subtly, it is how the beer is presented to you.

How it appears, the shape and colour of the packaging and the labelling all give (or don't give) visual appeal on a number of levels. In this, straight up, Pete declares an interest. He has a degree in marketing and worked in that field himself before becoming a writer and trust me, this is a good thing, as when you read the book, the first thing  that strikes you - apart from the lavish illustrations - is that this book is written by someone who knows and understands his subject. Marketing as a discipline is tackled head on with its good and bad points, fairly presented to the reader. While many of us may jump first on its ability to deceive or mislead, the other side of the coin is to present a case to the consumer. As Pete points out, when done honestly, it can be helpful to the purchaser, and false or misleading marketing usually gets caught out.

So where did it all start?  At its most basic, the brand is an identifying mark which denotes ownership.  Commercial branding also prevents the unscrupulous from passing off their product as someone else's. As far back as 1266,  bakers were required to put an identifying mark on their bread, but marks of ownership were around in 2700 BCE - so the idea isn't at all new. Now it is firmly enshrined in law of course. In the case of the UK, the key date is the 1st of January 1876 with the passing into law of The Trade Marks Registration Act. Fittingly, in the context of this book, it was brewer Bass which registered "Trade Mark No1".  A separate page of the book describes this and the continual fight Bass had against counterfeiting of both their brand and product.

Further chapters tell us of the evolution of branding, from labelling, to bottle shape and more recently, with the advent of craft beer, how cans became somewhat of a blank canvas to offer individuality and to get the product noticed.  Here the book really comes into its own with case studies of various well known and not so well known breweries. Pete explains that BrewDog's early labelling, with its offset lettering and brash colours were a clear nod to its rebellious beginnings and a two fingered salute to big beer, but also as BrewDog became more available in mainstream outlets, the design and attitude moved in two further iterations, from "rebellious" to "maverick", but still, distinctively "BrewDog". 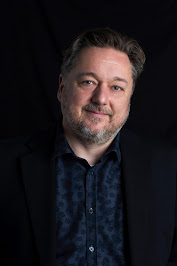 This part of the book is in effect an enjoyable and detailed insight for the reader as to what can influence labelling once the statutory requirements of contents, strength etc are got out of the way. The examples are carefully chosen and Pete's words set the context and decipher and break down each for the reader.  You will find what to the uninformed may be generically be "simply" art work, has to the brewery - and its marketeers - particular purpose and is carefully selected accordingly.

By the time you have whizzed through the book - and it is a delightful read in Pete's usual warm and easygoing style - you will find yourself going back over it again to look at the individual brewery pages in more depth. I particularly enjoyed the analysis of Cloudwater and Camden Town, where on one hand you have a small brewer with a great reputation, approaching design in one way and the other, now owned by "Big Beer" making changes that position the former craft darling - my words not Pete's - in the mainstream, but branding wise, still cutting edge.  As an aside, you learn too, that minimalism as in the case of Kernel is nowhere near as easy as it looks.

Whether it is art, typography, themes, family similarities, traditional or zany, labelling has a similar purpose, to identify and attract.  Pete poses the question at the beginning of the book "should you judge a book by its cover?"  As he himself says -  and I'm slightly paraphrasing here - Why not? You have to start somewhere." Of course the ultimate decision will be about the quality of the product inside the packaging, but the reasonable hope is that if care is taken in packaging and presentation, then great care is being taken with the beer.

This book is well  written, interesting and visually very appealing.  It is not remotely dry, but rather an engaging history of a serious subject. You will learn a lot in reading it.  This is not just a book for the beer geek, but has much broader appeal and is unhesitatingly recommended.

Pete Brown is a British author, journalist, broadcaster and consultant specialising in food and drink, especially the fun parts like beer, pubs, cider, bacon rolls and fish and chips.  He was named British Beer Writer of the Year in 2009, 2012 and 2016, has won three Fortnum & Mason Food and Drink Awards, and has been shortlisted twice for the Andre Simon Awards. Pete is Chair of the British Guild of Beer Writers. He lives in London with his wife Liz, and dog Mildred.

Beer By Design is available from CAMRA Books

"...the continual fight Bass had against counterfeiting of both their brand and product".

I would have sympathy for Bass if they had not destroyed the Union system and ruined the Draught Bass of the 1970s. In fact, is the current Draught Bass not effectively a counterfeit of the original ?

Nice review, sounds like a good book. With the long lockdown Winter evenings to fill, it sounds like an ideal time to buy a copy.

The sight of customers paying £3 plus from a "Craft Beer Shop" for a well designed and attractive can of micro-brewery beer is a bit depressing really. It really is a triumph of style over substance for what is basically a fairly commodity product.

I thought Draft Bass was now brewed by Marstons in Burton-on-Trent using the Union system the same as they use for brewing Pedigree. Granted, it's not brewed at the old Bass brewery.

Not sure what point you are making re Bass. It is brewed at Burton, but in conicals not the Union system

I'm not a fan of Pete Brown's writing so I doubt I'll buy this book.

You are missing out Nev.

It's a nice looking book, so thanks for bringing it to my attention, TM. I might have to splash out on a copy, seeing as I can't go out and drink the stuff!

Well, I wonder if Joseph Holt Brewery have bought the book as they well into beer design? If so, this could be a reference book at the Cheetham base....!