Where is the THT? 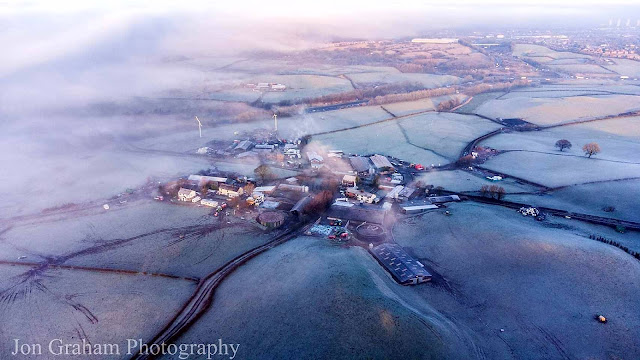 Regular readers of this blog will know that my chosen pseudonym Tandleman is named after my local pub, the JW Lees owned Tandle Hill Tavern, which in turn is named after Tandle Hill, a landscape feature between Middleton - where I live - and Royton - where I don't. The Tandle Hill Tavern is usually abbreviated by me and by locals as the "THT" or, simply "the Tavern."  A further geographical - or is it a political point  - is that the Tavern and Middleton are in Rochdale Borough Council area, while Royton, mentioned above, is in the Borough of Oldham. The boundary between the two is about 200 yards from the THT on the lane which connects the two.

The Tavern is a mile from either the A663 on the Middleton side or the A627 on the Royton end of Thornham Lane. You may have seen me mention the lane in my blog, usually referring to my traipse up there every Sunday from the bus stop, to join my pals for a pint or several. To quote the Good Beer Guide - which maybe I shouldn't - but I wrote it anyway - "It nestles amid a number of farms, reached by  an unmade, non-metalled farm track". Or, writing from memory, words to that effect, as the descriptive words vary from year to year. In other words it isn't that easy to get to. In fact when I speak to locals here in Middleton, it is surprising that many haven't heard of the pub and if they have, have never been there, or the adjacent 110 acre country park.

Now this isn't about to turn into a paeon of praise for my favourite pub, which has been a welcome part of my life for over twenty years, it is simply to let people know where it is and is inspired by the photo which accompanies this piece.  I came across this photo a couple of weeks ago on a local Facebook site. It was taken by a drone two or three weeks ago and illustrates, better than words, where this unique pub is situated. My first thought on looking at the photo, was "Where exactly is the pub?"  My second was to ask the owner, Jon Graham, if I could use it. He kindly gave his permission, for which I am grateful.

So what are we looking at?  This is the open farmland between part of Middleton on the left side and on the right-hand side of the photo, the lane,  continuing into Royton. The right-hand part of the photo, where it ends, is, more or less,  the boundary between the two boroughs mentioned in the first paragraph above.  If you look at the left of the photo, in front of the farm with the wind turbines, you'll see Thornham Lane. Follow this right with your eye to the clump of buildings in the middle and the reddish looking building - it isn't red - with an  apparently white roof - it isn't white  - is the Tandle Hill Tavern.  To save you the counting, there are four farms in the photo, so to say that it "nestles" amongst them, is pretty accurate I think you'll agree.

Going back to the wind turbines, you'll see the lane disappearing left. Obscured in the photo by cloud, is a bridge over the A627M -  itself just visible above the wind turbines - and hence after three quarters of a mile, the A663 and the 17 bus back home. (If we are not diverted to the Ship Inn, also owned by JW Lees,  a couple of hundred yards away that is.)

Of course at the moment neither the Tavern nor the Ship are available for anything other than visual inspection, but one day soon I hope, they'll be open for drinkers once more. Then that trek up the hill will be rewarded not only by pints of Lees Bitter, but importantly,  by the company of my many friends there.

From the War Memorial above the Tavern the views are similar to the drone, but of course more panoramic. It was here that in the period leading up to the Peterloo massacre it was said the area had been used by radicals for practising marching and drilling.

Views include a clear line of sight across the Cheshire Plain to Jodrell Bank. Its famous dish can clearly be seen as can , across to Merseyside,  Fiddlers Ferry Power Station. North to Lancashire, is the TV transmitter at Winter Hill which provides my TV signals. Its red hazard lights are easily visible when walking back down the lane to the A663.

Once again my thanks to Jon Graham for his permission to use his work in this blogpost.

Although I love the sounds of this place, it sounds like a nightmare for the draymen.

what's it gonna be after it's a pub?

Robin. Well not exactly. The milk tanker has to get up and down, so the farmers keep it good enough for that and if the milk tanker can do it, so can the dray.

I seem to remember walking to it from the country park to the south as Mrs RM wouldn't go near it in her new car.

I was trying to think of other pubs in remote locations and it struck the Tavern would get a lot more attention if it was in, say, North Yorks or Sussex.

The post is of course all bollocks.
The ancient island pagan legends tell of a man called "The Tand" who travelled around the taverns that came before pubs. He is written of and mentioned alongside many accounts of what us now considered mythology rather than history. The Arthurian legend of our once and future king returning when Albion is most in peril is first accounted to the Tand not Arthur and in fact it is “ye olde bitter ale houses” that are mentioned as warranting the return of the once and future Tand. It is said the original Tand is buried on Tandle Hill and a pub placed there to honour this ancient legend. And sure enough a new Tandleman emerged. Once and future you might say. For a time when the pubs and the bitter are most in peril.

Cometh the hour, cometh the Tand?

A great photo, and what sounds like a great pub too. Roll on the day when our cherished locals are finally allowed to re-open.

@Paul Bailey - Agreed roll it on, but I won't be holding my breath.

I'm planning a bike ride from Castlerock in Northern Ireland to Leeds, and was hoping to stop in the Tandle Hill Tavern, as I'll be nearby on Friday around noon. But it looks like it doesn't open until 5 on a Friday. As a regular can you confirm that's correct? I might cycle past it anyway, since I'm going through Middleton.