Richmond - A One Pub Visit

I think I mentioned that my main reason for being in London was a family wedding.  Now the wedding itself was in Brixton where the happy couple live, but the reception was in leafy and ultra posh Richmond, in a rather swanky spot by the Thames, but that was yet to be discovered. What was known that other family members were holed up in Richmond for the festivities, so we popped on the tube at Tower Hill, Richmond bound, to meet them. 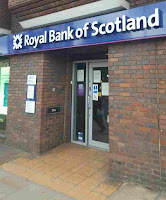 They had already arrived, and a  text advised they were eating at the Old Ship which was easily found, a seven or eight-minute walk from the tube station. Now, Richmond seemed prosperous to me as we made our way down what I'd describe as a High Street. No closed and boarded shops here, though the closing down sale of Gap would have soon altered that, but still, it looked busy and wealthy and there were pubs aplenty. What's not to like? Somewhat touchingly, too, for this exiled Scot, there was a completely functioning branch of the Royal Bank of Scotland - not RBS or NatWest - but the full Scottish monty. How my heart leaped. I could have been in Dumbarton if it wasn't for the complete lack of dereliction.

After a brief moment of hesitancy at the roundabout, we spotted the pub. A veritable feast of wood panelling and after the signing in rituals were observed, we noted that this was a Young's pub which hadn't been torn asunder, probably due to its long thin layout and somewhat venerable appearance; but unspoilt all the same. They had beer too. Young's Bitter and Special and even Proper Job. It was busy, and we joined our happily scoffing family to be warned -  and I paraphrase - that the Young's taste could best be described as absent and was a touch warm.

The pub, as mentioned, was busy. Adjacent was a large courtyard, also served by the same servers as the bar. That didn't help much, and table service was haphazard to say the least. Attracting a server is, I find one of the biggest downsides of the system.  But we persevered, with E, in an odd outbreak of role reversal, ordering Proper Job more than once and me, unwisely choosing Camden Pale which was astonishingly bitter and very gassy. I switched to something from Beavertown which was quite tasty once I'd knocked a couple of atmospheres of CO2 out of it.

Now here's the thing. E and I had spent a happy day in Richmond a few years ago.  Looking around, I couldn't remember or recognise a single thing about it. Not even the tube station, and we must have been there. It was so completely new to me that we vowed we'd come again. Some pubs looked rather good.

I'm not a fan of Young's or the Ram Pub Company as they now call themselves. So many of the pubs seem to have been very unsympathetically renovated to remove all character.

I didn't take any photos, except of the Royal Bank to send to friends of ours who once worked there. You'll have to make do with that. I must also point out that I am a customer of the Bank of Scotland, not this upstart.

Thanks for that. Melissa Cole pointed that out too. I thank you both.

(We stayed in Dumbarton for a week back in June...)

Quite a few nice pubs in Richmond on Thames - hopefully most will have survived the you-know-what - and I can't think of a lot that's new since "a few years ago". Maybe the Richmond Tap, and Pigs Ears Beer Cellar becoming Richmond Vault?

My home town, so of course, remarks are tongue in cheek. I'll be there next week.

You should have gone to the White Cross, a Young's pub by the river, three minutes from the Old Ship. There's every good chance of being trapped inside at high tide …

Well, being trapped in a Young's pub isn't high on my bucket list, Martyn.