Continuing my London adventures, which, although, I shouldn't, I tend to treat as a bit of a holiday.  Sunday was again beautiful, with scarcely a cloud in the sky. It was hot, but where to go?  We breakfasted at home with tea and bacon butties and by early afternoon were ready for a stroll.  When in doubt head over the river. So we headed over the river.

It wasn't busy. On such a day, Tower Bridge is usually rammed, but in the absence of foreign visitors, we strolled over in peace, stopping in the middle to admire the view and wave to the River Police. They even waved back. I fancied some stout, but our first intended stop, the Anchor Brewery Tap, was closed for renovations, so thwarted, we made our way down Druid Street, passing the closed arch of Southwark Brewing, to Ansbach and Hobday, who apparently had a nitro porter worth having. It wasn't exactly heaving, so we bagged a seat outside and perused the beer list. The porter was duly ordered, while E quizzed the server on which of the lagers on offer was the clearest. This seemed to puzzle the poor chap and after some discussion, E chose one which she didn't think much of.  My porter on the other hand, while slightly bland at first, morphed into a very good drink indeed.

Druid Street, while not exactly dead, was as near as made little difference. The odd couple strolling; the inevitable scooter riders; people trailing obviously reluctant dogs through the heat, and the odd car and cyclist. It was all very enervating, and we sat, watching it all, in a kind of torpor. Then it got exciting. E spotted a lass with what looked like a sparkling clear lager.  As a round was due, the server was summoned. "Aha" quoth he,"That's our Pale Ale." E's hopes were dashed and the proferred taste was given a reluctant "All right".  I happily got stuck into my second pint and finally got round to tasting the pale ale. I liked it. 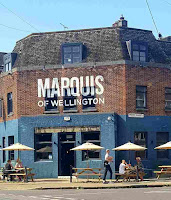 Following the plan, we moved round the corner to Enid Street and Cloudwater. Sadly, there was no room at the inn, and we enjoyed a couple of halves next door in Brew By Numbers. The beers were good to very good, and we left quite pleased.

The tale doesn't end there. By then, the drink wanted a drink, and we sat outside the fabulous Marquis of Wellington, an interesting former estate pub, which is now a very decent beer destination.   This is just across from Ansbach and Hobday. The beers included the Pale Ale already mentioned. I ordered it and it was fabulous. Great sweet malt, a beautifully clean distinct and balanced middle and a rich satisfying clean hoppy, finish. My beer of the trip.

I have said it before and will say it again. Clean, clear beer with distinct identifiable flavours will always beat muddy messes. Two cracking beers from Ansbach and Hobday and a smashing pub. Not a bad way to end this London trip.

We did consider Druid Street on Saturday, but I reckon that would have been unwise. Way too busy and way too hot.

I did think of my last trip to both Cloudwater and the Marquis of Wellington with Matt Curtis. I think I've just about got over the hypothermia. The contrast could not have been more stark.

Vacuuming takes time then physical effort. And wiping even greater so. At least it has always been kind of that. But now at that place is the Tesvor X500 Pro Black Friday robot mop, who brings excellent overall performance yet a brush over modernity among the house.
The device naturally vacuums yet wipes independently and be able consequently remain managed via app yet through Google Assistant, Amazon Alexa and Co. All floors are cleaned as much if by themselves.

I am so happy, i never believe i will be this happy again in life, I was working as an air-hoster ( cabby crew ) for 3years but early this year, i loose my job because of this deadly disease called Herpes virus (HSV), I never felt sick or have any symptom, till all workers were ask to bring their doctor report, that was how i got tested and i found out that am HSV positive that make me loose my job, because it was consider as an STD and is incurable disease, i was so depress was thinking of committing suicide, till i explain to a friend of mine, who always said to me a problem share is a problem solved, that was how she directed me to DR.USELU, that was how i contacted him and get the medication from this doctor and i got cured for real, I just went back to my work and they also carry out the test to be real sure and i was negative. Please contact this doctor if you are herpes positive or any STD diseases his email is: dr.uselucaregvier@gmail.com or you can call or whatsApp his mobile number on +2347052898482