Another Thing About Pubs

Yesterday, E and I attended a small event at the Rose of Lancaster, one of our locals. We'd been invited, along with others, to witness the handing over of two cheques to a couple of local charities.

We've been going to the Rose long enough to know the boss is extremely keen in raising money for deserving causes.  He runs a "Predict the Score" coupon each week in which us regulars chip in two pounds each week and have to give their best shot at predicting the scores for a number of football matches, some of which are highly unusual. (Our landlord adds spice, by scouring foreign leagues' fixture lists, to provide a degree of difficulty over the considerable degree of difficulty that already exists.) There is a weekly  number of prizes, some in beer and some actual money, but the vast amount of the proceedings goes to charity. A league table of success and failure is published and sent to us each week, along with next week's coupon.

If you visit the Rose, you will see photos of previous charity successes on the corridor wall leading towards one of the exits.  It shows a remarkable story. I joined in last year and while I rose to a high of 15th in the league once, I usually hover around 50th. Predicting scores isn't at all easy. Trust me on that one. The scheme is well-supported, with around 150 participants; so do the arithmetic. It soon mounts up.

There were two presentations yesterday. One was a belated - due mainly to Covid - presentation of a separate effort for the Royal British Legion and an old soldier with his flag and companions departed happily with a cheque for £2500. A great effort. I say departed, they in fact retired to the beer garden to swap tales and drink bitter. It was great to see. 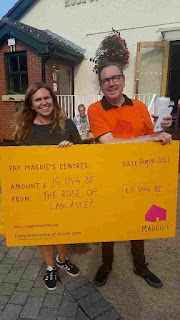 Last year's main charity was Maggies, a cancer support charity with a number of centres throughout the country, including one in Manchester.  They provide professional support for anything from the treatment of side effects, to money worries. It is all free and supported by donations.  Yesterday, a fair number of locals had turned out to watch the event, which was held on the steps leading to the beer garden. Our landlord, Ant, cajoled a number of reluctant topers to join in for a group photo. I was in one, but took pictures of the main event for both this blog and for our local CAMRA magazine.

When it comes to charity giving, British pubs have a long and proud record. Those old enough will no doubt remember the pile of pennies (later two pences) that were often to be found adorning the bar. These were stuck together by the application of a little beer and when they reached a sufficient height - or were deemed sufficiently dangerous - a local personality was called in to knock them over, usually in the presence of the local rag, who duly photographed and publicised the event. I suppose the poor old landlord then had to count the pile and take it to the bank. Not so much fun.

While piles of pennies may have departed the scene, the idea of pubs supporting charities certainly hasn't. The British Guild of Beer Writers - I'm a member - says that British pubs raise over £100 million a year from their efforts. I'll say that again. One hundred million of your British pounds. No mean feat and a large boost to much-needed good causes and likely, in many cases,yet another overlooked victim, of the recent regimen of pub closures and restrictions during Covid.

Fantastic then that Ant, our landlord kept it all going during the hard times. As a result, as you'll see from the photo, an amazing £16,044.88 was raised to help cancer sufferers. Well done to the Rose.

Unusually for  Monday, I had a couple of pints, but I plead "All in a good cause".

Next year we are raising much needed money to buy guide dogs for blind people. Wonder if one of ours will be named Rose?  Wonder too if I'll do better in my predictions this year? I doubt it.

"Those old enough will no doubt remember the pile of pennies (later two pences) that were often to be found adorning the bar".

Gallon whisky bottles, usually Bells, filled with copper are a variation on this theme from back in the day.