How Stouts Should Be

Who doesn't love a good stout? Well, I certainly do, but what I'm not so keen on is those that have been extensively mucked about with. By mucked about with, I mean the addition of the likes of coffee and most of all that evil of all evils, which should only ever appear in confectionary or puddings, vanilla. To that, generally, I'd add blackcurrant - unless to disguise the cardboard taste of Guinness - and most other herbs, fruits and spices. I'll leave a slight exception for a touch of chilli, but that is a now and again thing.

It isn't that I'm against such stuff, and I agree and recognize that there are plenty out there that like these additions, but what I do dislike is that a bit too often, there isn't just a straightforward stout that tastes of, well, stout.  There are exceptions of course, and maybe too many brewers feel that a "normal" stout doesn't get them sales in a crowded market. Well that's fine, but let's at least have an unmucked about version as the default, with the additions as specials. 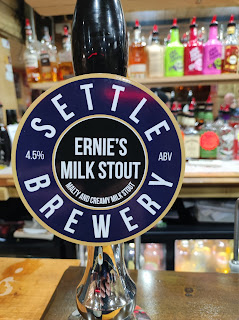 Others seem to agree that at least these additions should be used sparingly, as I ran a poll on Twitter with the following results:

I seem to have struck a chord with praising unmucked about stout, so a poll. Stout should contain ingredients other than water, malt, yeast and hops:

A respectable 215 people voted, with the vast majority saying stouts should have adjuncts added sparingly and occasionally.

This doesn't surprise me,  as that is how it should be.

I did once brew a fantastic stout with Ramsbottom Craft Brewery. It had a hint of chilli. I did an even better one with Aldgate Brewery, which didn't, so make of that what you will.

The photo shows an unmucked about stout taken in Skipton. See previous post.

Titanic's damson and vanilla stout wasn't bad. Strong agree that this shouldn't be the default way of producing stout, though - apart from anything else a brewer should be getting coffee-ish, cocoa-ish, tobacco-ish and whatever-else-ish flavours out of the hops and the grain. (Honourable mention for Duncan Barton's habit of making beers with additions that tasted almost exactly like a beer of a particular style without additions - see Ticketybrew's "Summer Fruits Stout", for instance. Since Tb packed up I haven't seen anyone else do this particular trick.)

Some folks seem to like all sorts of wacky ales to the exclusion of all else. I believe that something esoteric is fine occasionally, but a well-kept pint of Draught Bass, Courage Directors or even Harveys Best Bitter - so-called "boring" beers - satisfies me.

It’s not so much the ‘mucked about with’, though I totally agree with vanilla which is the ruination of many drinks. For me it’s sweetness. I like my beer on the dryer side, so on the rare occasion when I do find a Stout to see the word ‘Milk’ on it is a tragedy. A bowl of sugar on the bar should suffice for those who need to sweeten their beer to the point it isn’t refreshing any more…

I like coffee, vanilla, hazelnuts, maybe even fruit, but the stout underneath has to be dry and roasty for me and the adjunct notes subtly floating on top.

These milk stouts can be sickeningly sweet and synthetic tasting.

It's not unlike aromatic pipe tobacco - there is a fine line between pleasant flavours and oversweetened unpleasantness.

You say that the photo is of an "unmucked about stout", but it shows the pump clip of Settle Brewery's milk stout, which in my book has been mucked about with! I'm with Mark and Ben Viveur on this one - I don't like sweetness in a stout, or any other beer, for that matter. I would make an exception for imperial stouts or barrel aged strong ales, but any sweetness there tends to be mingled with bitter and/or sour flavours.

Ireland's equivalent of Sage is demanding all pubs and hospitality close at 5pm each day until January.
Furious backbenchers say they might compromise for 7pm.
We're heading down the rabbit hole again.
My local doesn't ever open till 5pm anyway so I'm fucked.

The cardboard taste of Guinness sometimes (often times for me) hits the spot. If you want want a proper stout try O'Hara's it is the best in my opinion.

Likewise saisons. I wish they would stop fucking about with them.

100%. So rare in the UK to find a standard stout or porter in a pub, other than the ubiquitous Guinness, which is ok but a bit lacking in flavour. With a couple of exceptions, I'm not a fan of pastry stouts / porters (including the much lauded Titanic Damson) and whilst I like an Imperial one once in a while I'd normally prefer a standard strength dark beer. Same goes for mild too, actually. I mean, I like IPA's, Pale Ales and Lagers, but should always be one dark beer on the bar, and it shouldn't have croissants or something brewed in it.

It might not exactly be a Stout but Harvey's Prince of Denmark reminded me of their Imperial Stout and is rightly described as "a strong, dark beer of great complexity and depth".
My pint of it for £6.50 this time last week in Eastbourne's Hurst Arms was exceptional.