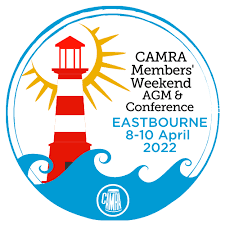 Before it fades from my mind entirely, I thought it worth mentioning the CAMRA Annual Conference and Members Weekend, which took place in early April at this venerable seaside town.  I hadn't been to Eastbourne for many years - the last time in the mid 1980s as a Trade Union Delegate-  and oddly enough held in the same venue. It would be good to say that I remember it well, but frankly, not a single thing - not even the Winter Gardens - had left the least impression on me. It was simply as if I'd never been there before. Furthermore, it was somewhat gratifying that E, who accompanied me, could remember nothing about it either. Ah, well. Not just me, then.

There hadn't been a "live" meeting for a couple of years, and I hadn't clapped eyes on many of the attendees for some time. I think it's fair to say none of us looked any better for the rest. You could see, apart from the odd few, that CAMRA's demographic time bomb, was all too obvious.  Mind you, none of that made the old buggers - me included - any less lively, and debates and motions were vigorously participated in.  The accompanying Member's Bar - a mini beer festival - was well attended, and the beers from the surrounding areas, were all in good nick. A mixed lot if I'm honest, and the lack of dark beers was soon evident as they all ran out first.  Incidentally, it was noted at the recent more local (to me) Oldham Beer Festival, that dark beers seem much more popular at this kind of event than pale. Fortunately, Oldham had anticipated this, and had plenty to go round. Maybe it is a Northern thing, though I tend to doubt it?

The Eastbourne Organisers had done a good job with the handbook and many useful local pub crawls were detailed.  If I have to be honest, the pubs of Eastbourne - again, none of which I remembered -  were a bit of a mixed bag. Some were surprisingly grungy. One or two wouldn't have been out of place in Gibraltar and if you've been there, you'll know that isn't a compliment, though some were actually rather good.  You certainly had to have a liking for Harvey's Bitter, which seemed to be in every pub. Well near enough.  My pick of the bunch was probably the Dolphin on South Street, though a few veteren 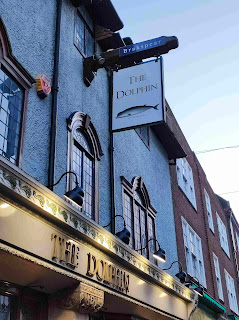 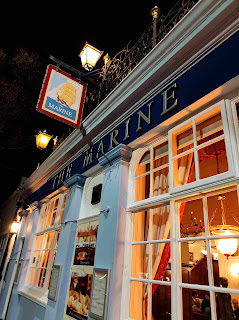 eyebrows were raised at the way one barperson splashed the beer one handedly into a resting glass from the handpump.  But that's a quibble. This was a proper pub, with regulars and visitors and a great atmosphere. Beer in Eastbourne was mostly around the £4 mark, as indeed it was in the Member's Bar. Quality was variable, though generally not bad. We also liked the Marine, which had fantastic bar staff and a really fine pub grub menu. And Harvey's of course.

The town itself is very spread out, and if, like me, you attended all the meeting sessions, it was hard to check everywhere out, though I have little doubt some either did, or tried to.  As always, these gigs are best remembered for the chance to meet old friends, and that we did. I moved one motion and seconded two, all of which were passed, so that wasn't bad. It was all rather good fun.

We stayed two nights, and that was probably enough for me. Despite its reputation as a retirement area and its fine promenade and pier, I doubt if I'll be spending my dotage there. There's only so much Harvey's a man can stand.

I also liked the Bottle Grove, where a lot of the Manchester Crew congregated on the Saturday night. No real ale as such, but it was a jolly little place, with a great host, and the Keykeg was just fine for a change.

The other beer encountered more than once was from Long Man, including at the Stage Door next to the meeting venue. Sorry, but not a fan either and, you've guessed it, the other option was Harvey's. The beer here was in good nick though.

We stayed at the View Hotel, which was excellent and just a two-minute walk from the conference venue. That was wise.  The weather was very kind too, which allowed E and some others, to ascend Beachy Head.  Alas I missed out on this undoubted treat.

You certainly had to have a liking for Harvey's Bitter, which seemed to be in every pub.

I guess it's local! Then again, Brighton's even closer, and can you find Harvey's there? On my last trip it was confined to Harvey's own pubs, of which there were very few.

Phil,
Harvey's being just about my favourite beer, and the seaside, made Eastbourne one of the best ever AGM venues for me.
I stayed in the Lamb, got to Harveys's other three pubs ( none of them in the town centre ) and was on Harveys in the Dolphin when Tandleman introduced himself to me on the Saturday.
As for dark beers the Hurst Arms had Mild, Old Ale and Prince of Denmark on.
A much better place than Torquay, with its one good pub, that's the only place other than London I've stayed as a trades union delegate.

I like to see the "one handed pour", with the glass standing on the drip tray. It's how you know you're really in the South! It's not seen all that often, because tight sparklers and swan-necks are everywhere these day.

Well. There is that.

It's wonderful to hear the old timers still able to get out and about and enjoy themselves. Super. Like an episode of Last of the Summer Wine. Who went down the hill in a bathtub?

As for the demographics, like I told you on twitter, you did your bit, mate. Not your fault the revitalisation failed. You could have had all those craft kids. A new generation of beer sniffers. Not your fault CAMRA told them all to bugger off and start their own campaign.

I'd say your experience of Eastbourne is very much akin to mine, "grungier" than expected, particularly around South St.

A mixed bag, not essential but worth a visit. The Towner Art Gallery rather than the pubs is the must-see.

>you could see, apart from the odd few, that CAMRA's demographic time bomb

Saddens me to read this but I saw some of the pictures on Twitter and it was clear. CAMRA tried to reverse the trend but maybe it's time to burn out rather than fade away? Really wish something could arise from the ashes as the license trade and the drinking public really does need some knights in shining armour at the moment.

It is rather worrying. We aren't done yet for sure, but the future looks worrying to be honest, but we shall see. In this case, time will certainly tell.

what are the finances like? if you wrap up the campaign would there be a paid final dividend to all members?

I gave up with CAMRA. From day one you are viewed as a financial commodity and are regularly persuaded to be exploited at slaving away at one of their beer festivals (for continually driven downwards 'perks' year on year), or doing the unpaid work that their paid staff at HQ should be doing.

Not to mention they have been utterly useless during the Covid pandemic. Greg Mulholland's 'Save The Pub' campaign was far more proactive, bagging TV and radio interviews about the subject. Where were CAMRA? No where to be seen!

For a supposed 'non political' organisation, banning beer pump clips they didn't agree with, an LGBT themed GBBF, plus the diversity survey.

>For a supposed 'non political' organisation

And independent except that annually they supply marketing material for JDW which is a stealth recommendation for one company. One which was very political during Brexit and doesn't do that much to raise the standards of cask ale as a quality drink with the continual drive downwards price wise.

You earn valuable points for this amazing write up my friend. Just like you, we offer desperately needed help for young job seekers through our FAKE NURSING LICENSE especially for aspiring nurses who do not have a college degree. I'll definitely check out your posts more often. Cheers

Sad what the world has come to :-(