When asked about how a pub can make the most of itself, I usually paraphrase Bill Clinton, who when campaigning for President, when asked the most important thing about governing America answered "It's the economy, Stupid".  My paraphrase is, "It's the offer". I don't add "Stupid" though. Well, not generally.

You would think it obvious that when running a pub, the main consideration would be how best to present the pub to attract the maximum number of customers of the desired type wouldn't you, but amazingly, to this writer at least, that often doesn't happen.  That isn't wholly  the point of this particular piece, though, but it does show the value of getting it right.

The Swan with Two Necks in Pendleton was the CAMRA National Pub of the Year in 2014.  It is a neat little place near Clitheroe in the village of Pendleton. Slightly off the beaten track, but well worth the small detour, if like me, you are on a coach that is going to Clitheroe anyway.  I was with my fellow imbibers from our CAMRA Branch and in the time-honoured fashion we were due at the Swan, by arrangement, shortly after opening time.  There were, I think, about forty of us on the coach and our social guru had arranged in advance, for those requiring it, a lunch of sandwiches and chips.  We'd opted out, as such an early lunch was not needed, but after the warmest of greetings and pints being selected -  we were shown to a marquee in the garden where (for a fiver a head) a veritable feast had been laid out.  This was quality and worth every penny, judging by the oohs and aahs of the participants.

The bar staff, in what soon became a very busy pub (apart from us) were fantastic. They dealt with the thirsty influx with cheerful calmness and control and somehow, we were all served very quickly. The beer range - see photo - was an absolute delight and was immaculately presented, while the landlord and landlady oversaw it all with smiling efficiency.  I recognised the boss, Steve Dilworth, as shortly after the award in 2014, I'd visited the Swan and interviewed him on behalf of the On Trade Preview magazine, for whom I'd been commissioned to write an article on what made an award-winning pub.  I wrote then, "Steve runs a pub that works for him and his customers. He exudes the warmth and welcoming attitude that you hope for in a pub, but don’t find often enough.  If you had to sum up his offer, it is a balanced one that has evolved rather than been devised. At the Swan you get a genuine welcome, good beer, good food (in generous portions) and a pub which is the centre of the community. It goes without saying that the beer is above reproach in its quality and condition." 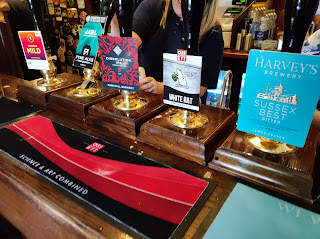 It was good to see that almost eight years later that same warm welcome and high standards were still there for all to see. I think it's fair to say that many of us, despite the attractions of Clitheroe, would have stayed there all day. And you can't really have a much higher compliment than that.  We all left with a degree of reluctance, with Steve thanking us and coming out to wave us off.

The line-up of beers was particularly well-chosen.  But what a dilemma. White Rat, Harvey's Best and Fyne Ales Jarl. How on earth do you pick the bones out of that when you only have limited time?

I won't do a pub crawl report of Clitheroe, but it is well worth a visit, with a few decent micropubs, the massive Bowland Beer Hall and to me, the pick of the bunch, the New Inn - a proper old-fashioned pub with a great range of beer in top condition.

Any pub that stocks beers from Harvey's and Marble is a keeper! (Never seen Marble Mild, either.)

Surprised to see Harvey's making an appearance in Lancashire. Pleasantly surprised, too!

Sadly I didn't have it. Fyne Ales Jarl for me.

I've been to the Swan With Two Nicks a couple of times since it became National PoTY. It's a nice pub, but I have to say its specialness somewhat eluded me. Maybe it would be better at a quieter time when it wasn't dominated by the food trade.

Agree entirely with your comments on high standards paying off. Like Mudgie, I can't say it seemed an obvious National Pub of the Year when I visited the year before the award (compared to, say, the Baum or the Kelham Island Tavern) but I guess it's good to have pubs that anyone would use rather than specialist ale pubs as your winner. All the national winners I've visited over the last 30 years have served top beer.

T'other Paul,
Not just in Lancashire but Yorkshire too. I had a pint of Armada in Huddersfield's Grove in 2019.
My belief that Harveys is Britain's best best brewer was confirmed by thirteen pints of seven of their beers ( no, not 91 pints ) during last weekend in Eastbourne. Their 7½% Prince of Denmark in the Hurst Arms might well be my Beer of the Year. Their four Eastbourne pubs, including the Lamb where I stayed, were wonderful with my only disappointing pint being in another one, the Dolphin, and you've never guess who you might meet in there.

All thanks to Mr Anderson Carl for helping with my profits and making my fifth withdrawal possible. I'm here to share an amazing life changing opportunity with you. its called Bitcoin / Forex trading options. it is a highly lucrative business which can earn you as much as $2,570 in a week from an initial investment of just $200. I am living proof of this great business opportunity. If anyone is interested in trading on bitcoin or any cryptocurrency and want a successful trade without losing notify Mr Anderson Carl now on Whatsapp: +1(252)285-2093 Email: andersoncarlassettrade@gmail.com