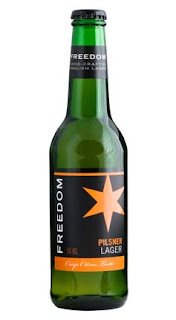 Seems CAMRA is going to get a run for their money. An English lager brewer is attempting to launch an organisation that would be to lager what the Campaign for Real Ale (CAMRA) is to cask beer. LOBI - catchy innit - it stands for Lagers of the British Isles will be launched by summer if current canvassing is successful.

LOBI is the brainchild of Staffordshire's Freedom Brewery and aims to "let British bar owners, the British public and indeed the world, know that they can sell and drink micro-brewed British lagers with confidence." They aim to change the perception of British lager as a "mass produced drink with little individual character."

Well good for them. If it shoves a few Carlsbergs or Carlings off the bar, it would be a good thing. Do you think it'll take off?

I tried all three of the Freedom lagers at the Northern Bar Show. I liked the pilsner, but the organic and dark weren't as good.
The Publican has the story here
Posted by Tandleman at 23:51

I think it's a great idea, and not necessarily a threat to CAMRA. Anything to raise generically the profile of good beer (keg, real, whatever) has to be a good thing.

I thought Freedom's dark lager was a rather good Vienna red.

I agree. As for the dark, when I saw the colour that's what I thought. Until I tasted it. Pretty bland though in fairness the samples were minuscule. Mind you the pilsner sample was just as small and |I liked that and I did ask for seconds of them all.

Either the Publican or The Morning Advertiser (I can't remember which, and it's gone now) ran an excellent April Fool story last week. Here's the text:

£50m celebration of standard lagers set for the summer

The UK's 'Big Four' brewers are aiming to scupper growing sales of cask beer
with a celebration of standard lager.

The brewing giants are understood to have been inspired by the success of
Cask Ale Week, which kicks off next week (April 6 to 13). They have pledged
to invest £50m in advertising and marketing support, believing that they can
encourage consumers to 'love a lager' and order standard keg beers.

A spokesman for the newly formed Brewers United Loving Lager group denied
that the choice of date - the same week as CAMRA's long established Great
British Beer Festival - was a deliberate provocation.

"We've picked the date because it's the height of summer," he said. "When
the sun's out, people want an ice cold, fizzy four-per-center - maximum
refreshment and minimum taste.

"Cask Ale Week has managed to drum up loads of interest with a budget that's
pretty pathetic compared to the resources we can muster.

"So, let the sandal-wearing beardy-weirdies have their festivals and drink
their warm, flat ale. In pubs up and down the land people will be drinking
our products during National Lager Week 2009, and throughout the year.

"Lager is the UK's best selling beer category and, quite frankly, we're not
going to apologise for it any more. We're not going to invent bogus
provenance and spurious histories for bog-standard, mass produced keg beer.
It is what it is."

It amused me anyway.

It was in the Publican - which is why when I saw this latest article I thought it was an extended wind-up.