Beer of the Week - So Far 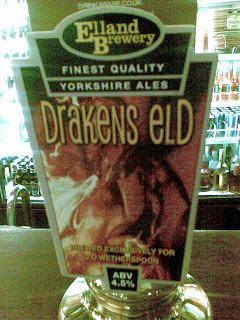 I see others have noted that JDW has ended its 99p promotion. I noticed this yesterday when on a brief two pub crawl of Rochdale. For once my visit to the Baum proved disappointing. Three beers on offer here. One was a honey beer from someone or other. It wouldn't do. I wanted something pale and hoppy for my first drink. Flowers IPA (didn't know it was still listed) was the other choice, before settling on my chosen beer, Hoppy Blonde from Williams Bros of Alloa. Did it do what it said on the tin? Alas no. It was pale, thin and weedy with a slight phenolic finish. I made my excuses and left. Even the best pubs, and the Baum is one, have a day when the beer doesn't suit you.

The Regal Moon is a large art-deco former cinema owned by JD Wetherspoon, is a GBG entry and is usually good for choice. Today was no exception. In addition to Triple F Alton's Pride, current Champion Beer of Britain, the superb Phoenix White Tornado, beers from Allgates (hmm) a special from the dependable Elland was available, as well as more standard offerings.

Bearing in mind the recent criticism of JDW on some blogs, I looked carefully around this large pub and did observe one small group of ne'er do wells. About five in number, they sat and chatted and if they smelled, it didn't reach me at the bar. Shoppers popped in and out, young couples, whispered in corners, two old dears nattered over their late afternoon meals and the only thing in the air was the buzz of conversation. There was a distinct lack of comatose bodies on the floor and no aggression or scrapping going on. No-one seemed to be getting tanked up before going on elsewhere. OK it wasn't Friday night - but let's face it, it seldom is! It was disappointingly normal.

Back to beer. Phoenix White Tornado was dependably good, Allgates Groundhop Day was ordinary, as their beers increasingly tend to be these days. There is often a strange chemical finish in them which I just don't like. I had to try the Alton's Pride. It was in excellent condition, an old fashioned full bodied brown beer, with a strong malt base and a good hop finish. A very good beer, but champion? Must have been great on the day I suppose.

Last up for me was the oddly named Elland Drakens Eld. This is a pale, ginger beer with a full body and a very strongly bitter finish, with a distinct ginger bite. It might not be to everyone's taste, but it was a very interesting and enjoyable beer to finish on and my beer of the week so far. But of course Easter weekend beckons.
Posted by Tandleman at 06:51

Drakens eld is Swedish for fire of the dragon, that part is easy for me (being Swedish). However the connection between the beer/brewery and Sweden seems harder to understand and the company´s website offers no explanation...