I can't think of much to write at the moment. Normally I am stimulated by the various blogs that I read and something flies into my mind. Not so this week, though maybe that's fortuitous as my week so far has been dominated by putting together my first edition as editor of our CAMRA branch magazine. It has gone to the publisher now and hopefully when I get it back, it'll look all right. 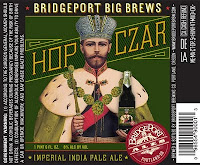 So what else has happened? A replacement case of US beer came to me unscathed from Oregon, so that's a good news story. UPS didn't manage to lose this one. I have promised my pub mates a tasting, so that will have to be arranged. Six different bottles including an Imperial IPA. Can't be bad, but I reckon I'll try them all here first with the lovely E and maybe report back.

Did I mention I was going to Chicago? Probably not, but I have now booked my flight to meet up with my Yankee beer mates, who are flying in from all points of the US. We've been there before on our meet ups, but there seems to be an even better beer scene now and it will be good to mix with Americans who know their beer, have been involved in it at many levels for years and aren't remotely obsessed with strength and rarity. In fact I think some have been banned from popular American based beer sites for talking sense. We'll just seek out good beer and enjoy it and I'm looking forward to a return to Goose Island at Clybourn and a couple of new brewpubs. I don't anticipate any problems with my fried eggs!

It looks like the latter part of April will be busy, as in addition to Chicago (and badly timed as the week

before), I'm also going to the Isle of Man*, a favourite place of mine, to the CAMRA AGM. Should be fun. I've put a couple of motions forward which I think might meet with blogger's approval, but I'll wait to see if they appear on the order paper before sharing. Oh and we are off to Frankfurt* in June with our local CAMRA chums on a cider hunt, though I think there might be beer involved.

And tonight I'm off to Robinson's Brewery in Stockport to present them with an award from the Winter Ales Festival for Ginger Tom, so hopefully there will be some available later. I like beers with a bit o' ginger.

So that's it. I'm uninspired, but at least have stuff to look forward to and which should provide some material for blogging. It isn't all bad.

*If anyone tells you Flybe are cheap, they are severely mistaken!
Posted by Tandleman at 11:01

Have a nice evening in Stepford, say Hi to Clarkey and maybe if you two put your heads together you can possibly russle up a nice keg of lout for the next beer festival.

Chicaga?? WTFH??? Definitely the home of lout. Hope you enjoy ice cold Old Style! Why are you beer bloggers so hesitant to come to Southern California?? Ever heard of a town called San Diego???

Lout my arse. And we have to go to somewhere we can all get to easily.

That 'Hop Czar' character looks far too suspiciously like the Greede King for my liking. Have they ever been seen together in the same room?

That town can't hold a candle to San Diego beer wise, not a chance! Southern California once again gets snubbed by supposed beer experts!

Have you been sniffing glue again Sausage? No-one is being snubbed by anyone.What part of "somewhere we can all get to easily" is giving you a problem?

As it happens a mate of mine lives in San Diego, but that's moot.

Oh I get it, I'm just suspicious there's more to it. You can get anywhere "easily" by plane. Traveling to the land of Vienna Beef and Old Style does not sound intriguing. I will wish you well on your travels, with the hope one day you will drink in the nirvana that is SoCal.

Shame I'm not in Stockport at the moment, wouldn't have minded joining in the celebrations - especially for some Ginger Tom, it continues to prove elusive!

I won't be at the members' weekend as it's the same week as the Newcastle Beer and Cider Festival, and I'll probably be swinging off the scaffolding by then!

Do you know of anywhere decent to drink in Frankfurt TM? I've got a business trip there in April and will hopefully manage a couple of hours off for some beer hunting...

Will UPS ship alcohol to and from Oregon? I always understood that it was a strictly prohibited.

I am also going to the Isle of Man for the CAMRA AGM; my first visit to the island.
We'll have to arrange to meet up for a few beers!

Isle of Man is crap for beer, as I assume you know. I was there a few months back and struggled to find anything worth drinking...

Stuttgart is okay, although the local beers are all very sweet and hop-less presumably to match the Riesling made there?

Gazza - I know some peeps in Portland if that helps. Stuttgart? My least favourite German city probably, but its Frankfurt I'm going to. IoM will be fine. I like it.

Dave. I got "yeast samples for commercial evaluation". No idea about this beer stuff.

Chris - Frankfurt isn't great for beer. A couple of brewpubs and a lot of big brewer's stuff.

You will have a great time in the Second City.Whorst you are just another Southern Californian beer faggot.

He'll have a great time drinking Old Style and raising his cholesterol levels to monstrous levels eating those abominations you call hot dogs. Might as well stay home and eat black pudding in a bun and drink Carling.

Herr'man, when you want real beer, real food, in a picturesque setting, you let me know. I'll drop your cholesterol, indulge your mind with Proper Real Keg, and you won't have to worry about being mugged or someone taking advantage of your lack of understanding US currency.

If Frankfurt's bad for beer, I shudder to think of what it's like for (am I reading that right?) cider!

Nick. Your education is sadly lacking. Apfelwein is a Frankfurt speciality.

Sausage. The only thing difficult to understand about dollars is why they all look the bloody same, no matter the denomination. And my cholesterol is just fine matey boy. It is checked regularly.

Oh and hot dogs and Chicago style pizza? No way.

Good, glad to hear you got it under control.

Interessant. When in June will this be--have you a date set?

Actually, if this Chicago do were being done someplace like San Diego or Manhattan, I'd be likelier to want to tag along myself. Seen you lot once in Chicago already, and I've been to neither of the other two places for a big drink-up. And herself might be more tempted to tag along.

Well I'd have preferred to go somewhere in Yankley I hadn't been, but that's the way it goes. We'll be fine.

In FRA for a couple of nights 4th and 5th June. Fancy coming along?

I'd be delighted. I'll put it on the calendar, such as I have anyway. I've never been to Frankfurt outside of FRA and the Hauptbahnhof. With this much advance notice, I might even be able to find cheap DB tickets.

Hey, we can probably find some fresh Henninger. No, seriously, I'd like to try it vom Fass, as I drank quite a bit of it from cans in Oregon.

Looked at booking a flight to the Isle of Man with Flybe - not much alternative from this part of the country. By the time all the extras (seats, baggage, card fees etc) had been added on, the cost of the flight had increased by 50%.
Gave up and decided to take the train to Liverpool and then the Seacat instead. Less than half the price!
Flybe are a con!

Chicago is a great beer town, with lots of brewpubs and terrific food. Also great public transport among the venues unlike certain parts of the West Coast that will remain nameless.

And Tandleman will be eating Vienna Beef hot dogs, trust me. We'll give him a pass on the pizza, as he whinged away so pitifully the last time that no one wants to hear it again.

Dave, not all that long ago, Belmont Station in Portland shipped huge quantities of beer via UPS, with their driver making pickups every day with full knowledge of the contents. After some breakage and spillage, they announced they were shocked and appalled at the trickery.

Just read the motions. Intruiged, which ones are yours? As we're an electronic bunch here, I've posted my very personal take on them on the CAMRA forums:

I recommend Piece Pizza if you have a chance: excellent thin crust coal-fired pizza and award-winning own-brand brews... it's a good place to hang out for a few hours.