What makes a great beer festival? Many things obviously, but for the beer buff it has to be great beer, in good condition and lots of it. The Society of Independent Brewers (SIBA) sponsored event last week certainly got a straight three ticks then. This was a twofold event, with beer being judged for SIBA purposes, before being sold afterwards to the public.There was always 56 handpumped beers on the bar (The beers were all served by gravity for judging though of course)and all were served in tip top condition, though I'll add a little caveat; the beers got better as the event went on. It's real beer this; live stuff and it needs time to condition and by Friday and Saturday it was top notch, with some beers maybe being a tad less than optimum on Thursday. But that's cask beer. It behaves individually. 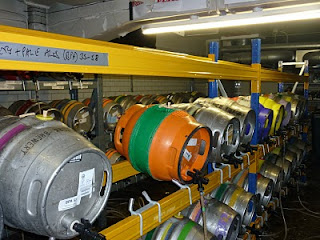 The cellaring was one of CAMRA's main jobs and was an amazing affair with 282 casks stillaged for judging on Thursday and miles of pythons set up and air cooling installed. It was quite a job all in all and we were certainly all in by the time we'd finished getting everything on the racks on Monday of last week. The temporary cellar was fantastic - a cellarman's wet dream in fact - and the beer cooled well, especially after Thursday, when access to the cellar was severely restricted and the need to leave doors open was gone. I have to say that even us that constructed it were impressed with our efforts and I doubt if so many casks have been stillaged that way all at once many times before. Needless to say cellar tours were very popular.


It was quite a change for CAMRA members serving the 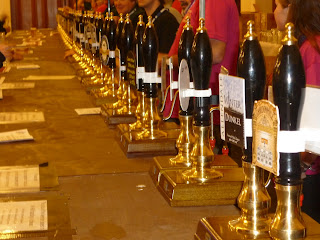 beer too, with fresh glasses being used each time and all beers served, as God intended, through a tight northern sparkler. This proved surprisingly untroublesome, as after expert tuition - by yours truly of course - staff (mostly) adapted pretty well to the new serving methods and the customers seemed to love it. We used the looser black sparklers on Thursday and mostly tighter reds on Friday and Saturday and the handpumps were new quarter pint Angrams, the King of Handpulls. Hopefully it helped shatter the myth of sparklers driving out condition and the sight of nice tight creamy heads on the beer gladdened the heart.

As well as the unknown ones I judged on Thursday, I did try a fair few of the beers, either from the bar, or direct from the cellar. Somehow I was in a dark beer mood, with notable potables being; Fernandes Malt Shovel Mild; Bushy's Oyster Stout; Bollington Nights (and Bollington Chilli Nights) and many more. On the light side, beers that impressed were; Millstone True Grit; Tatton Gold; Elland Best; Southport Golden Sands; Hawkshead Bitter and Windermere Pale and Jarrow Rivet Catcher. Speciality beers that I liked included Hawkshead Damson and Vanilla Stout, which confirmed my belief that Hawkshead just don't know how to brew a bad beer at the moment.

As mentioned above, I did have quite a few cellar runs too. Favourites from the cavernous depths were beers from Stringers - not a bad one in any category and beers from Bowland, Peerless, Elland and Jarrow also impressed across the range. While there were a few stinkers, overall the standard of brewing was tremendously high.

So, from our CAMRA point of view, it worked out well. Attendances were a little disappointing though and one or two teething troubles are always evident in a new venue, but all in all an enjoyable and different event, which hopefully SIBA will wish to repeat. If you weren't there, you missed a treat.

For a list of SIBA Competition winners, click here. A good account of the judging process by my good friend the Ormskirk Baron is here. He also mentions some of the bloggers who turned up.

Did you train them to take off the sparklers on request?

Indeed I did, but like a lot of training it was mostly never put into practice. No demand.

I certainly think its a good thing that you've got here then, keep up the good work

Do you reckon it could have used more publicity then? I don't remember seeing a poster for it in our place. I think I put up about 200 posters all o'er the bloody place for the Barrow Hill festival near me. And I was one of the slackers.

You can probably count on a sell out next year anyway, if the festival was generally well organised.

What was the excuse for the ridiculously high £7 entrance charge on Saturday? Way over the top. The last SIBA event I attended in Nottingham was free!!

A great write up and well done on getting all that beer setup and served!

Was great to see you 'proud in pink' behind the bar ;)

Cheers also for the link!

Was nice to finally be able to meet you, Tanders!

Gutted I missed it - that cellar looks awesome. It's definitely satisfying drinking a sparkled pint, and I personally find pulling on equally as satisfying. Will definitely try and make it next time.

I thought the same Dom, didn't know about it until 2 days before!

Oh, to be in England and having all the ale there...