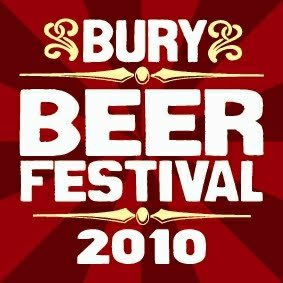 It's Bury Beer Festival time again. This time we (CAMRA) aren't running it, but hiring a stand from the organisers, so we can sell beer and recruit members. Back to the day job of persuading people that good old cask beer is worth a go and CAMRA is worth joining. There will be keg too, though not from us, but it will almost certainly just be lager from Outstanding, who are also having a stand - I think. It is all a bit arms length for us and a complete change. We just have a 16 ft bar with a 4 ft end and stillaging for 12 beers with 8 for handpump on the floor on sleds. There will also be ten ciders and perries and a membership area. It should be a piece of piss relatively speaking. No door to worry about, no glasses, tickets, cash or entertainment. Just serve beer, take the tokens and collect the cash later, minus the fee. It should be easy, but we'll see.

I've chosen the beer from a very tight budget. When you look at the prices that beer agencies charge, it is quite frightening. Still we have some good stuff. Beers from Mallinsons including a Chocolate Stout with Green and Black chocolate, Crown Brewery Stannington Stout, Nightmare on Henry Street from Steel City (featuring Magnum hops for bittering and Amarillo, Cascade, Centennial and Citra hops for aroma. Dry hopped with Citra and Amarillo.) Phoenix, Ossett, William Bros, Marble Ginger and Manchester Bitter, plus a few other beers from Greenfield, Riverhead, Fernandes, Holdens, Howard Town and Jarrow don't sound too shabby at all do they?

Should be fun. We open on Friday.

I'd like to come, but I'm playing this Friday and at a gig in Liverpool on Saturday. Next year, perhaps.

Can't make it, sorry. The SIBA fest will have to do me for a while.

BTW, I'd say the single best beer I had in my nearly three days of pub crawling and SIBA festing would have to be the Mallinson's Crescent ale at the Crescent in Salford. Lovely, lovely beer, glad I managed to find one of hers.

I'll be along round about 5 on the Friday evening, all being well.

Yes, everyone should come along. Any tickers out there may be in for a pleasant surprise as well.

Hello ...
My name is Ricardo, aui I live in Brazil and I really enjoyed of your posts, I'm adding your blog to my reading list ..
Pass on my blog and leave a comment, craft beer is growing in Brazil for a look of my blog .... link below ...
Ein Prosit !!!

Thanks For blog with usable informations.