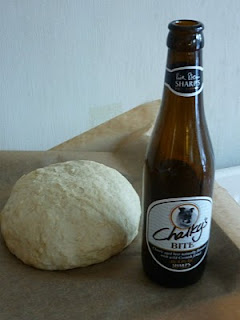 Something came over me and I felt remarkably creative this morning. I thought "I know, I'll make some bread for later." (I'll make lentil soup to go with it too, but that will be done this afternoon as it is so easy.) Now this being a beer blog, I wondered if I should use beer instead of water? Why not, so a bottle of Sharp's Chalky's Bite was dragged out of the cellar - well garage - and duly popped in. It is proving now. I did this by hand rather than my bread maker and following something I saw on TV, didn't over knead it, as after all it is a chemical process. Or so the theory goes.

My thinking was that being bottle conditioned should help the rise and being pale and flavoured with fennel should give an interesting taste. I haven't used beer before in bread making, but I'll keep you informed of progress.

Mustn't hurry this. Give it time I tell myself, but you know, I'm quite excited about it.
Posted by Tandleman at 10:39

"Legumes (like Red Lentils), have a high carb count but a much lower "net carb" or "digestible carb" content. They contain several vitamins and minerals. They are a good source of dietary fibre, which has a number of health benefits.

So go forth and multiply.

Well I think one big can of Linsensuppe is enough for me for one day...that was my lunch. And no grief about not being home-made -- today's a big brewing day, so I'm busy enough in the kitchen already.