The Joys of Smooth


Remember Woolworth's? Woolies to us old'uns. They used to be big around here and had a large distribution depot a few miles from where I live. Now big businesses (remember them?) spawned social clubs and Woolies had a fine one, up a leafy (well not at this time of year obviously) side street, not far from the now closed depot. This still carries on and I read in a notice in the bar when we called for our quiz match last night, that the club has been bought from the receivers, which is good news. As part of that new freedom, they have immediately tied themselves (by loan I assume) to a brewer. Oh well, needs must and all that.

I have rather a long history with social clubs. It started with Denny's Social Club in Dumbarton, another club which long outlived its parent (shipbuilders in that case). In Liverpool it was the Docker's Club and through my years in the Liverpool Social Clubs Darts League, many others. Almost without exception, the ale (old fashioned CO2 keg) was bloody awful, requiring recourse to that old Scouse favourite, brown bitter, which accounts for my almost encyclopaedic knowledge of North Western bottled brown ales. The one exception was Walton Ward Labour Club, where a lone unmarked handpump dispensed Burtonwood Dark Mild. I don't recall cask in any other club back th 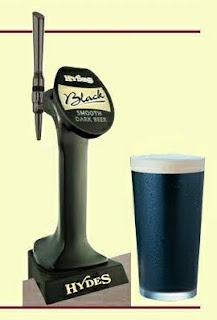 Things have changed. In our quiz league, we often come across clubs with cask beer, though bright fonts still dominate. Back to Woolies. Their new supplier is Hydes and all the beers are smoothflow. I had the Hydes Black, a mild which knocks Guinness into a cocked hat flavour wise and doesn't taste "just cooked" and which, despite its Arctic temperature, was a decent beer well worth drinking. The boys had various Hydes' smooth beers and professed themselves as more or less content. As they pointed out, Hydes aren't known for pronounced flavour, so it was put uppable with.

My own view is that smoothflow only really suits milds and stouts. If only it wasn't served at 3 or 4° C!
Posted by Tandleman at 10:52

Labels: All Our Yesterdays, smooth beer, Social Clubs
Email ThisBlogThis!Share to TwitterShare to FacebookShare to Pinterest

From my own, admittedly limited, experience I haven't found that Smoothflow particularly suits Milds. Possibly because of their low strength, but I'd be interested in trying a good example, if there is such a thing.

I should have probably said that at a pinch it suits some milds and stouts. I would never be a case of preference, though I have remarked about my fondness for Wrasslers and indeed Chestnut Mild on smoothflow.

In my limited experience with smoothflow — Farsons’ Hop Leaf served by a Protz lookalike at the brewery, very disturbing but I have the picture — it plays havoc with my digestive system and is not a pleasant experience; however on the other hand if Wrasslers is fresh(ish) then it’s not bad at all.

Here in Grantham, the recently defunct 'Kontak' social club now stands like a giant ghoul, overlooking a traffic island that is set to be the site of new statue to honour Margaret Thatcher - the local girl done good. The irony seeps out over the tarmac, spreading widely across the whole area...

I used to drink Hyde's Black at the John Millington in Cheadle Hulme when it first reopened if there was no decent cask available. They've taken it out now and improved the cask range, which can only be good. Not a fan of mixed gas beers, though, in general.

Do you even speak English? Seriously, wall of text crits me for 99999k.

Smoothflow = any cask ale served through a sparkler

Dark mild certainly suffers less, in my experience, when served under any sort of artificial pressure than pale beers do. It would be interesting to know if this is linked with dark beers' tendency to form creamy heads, and to see comparative data for dissolved CO2. IIRC the Burtonwood dark mild I drank in the Cambridge in Liverpool in the mid-1970s was pressurised, but was nonetheless a very drinkable pint.

"It would be interesting to know if this is linked with dark beers' tendency to form creamy heads,"

Dose that not all stem from Guinness town porter been guiled and been a lively been in the cask. That eventually lead to the development of nitro flow

I think Guinness did indeed use nitro to mimic the product produced by mixing old and very young and lively beer. It is also why they pause for the "settle" though that is just for show really.

You're selling out Herr Mann. I expect the Joys of Proper Real next.