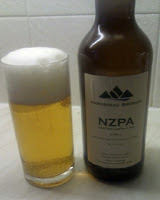 Now that my Belgian man flu has subsided to a cough and my nose has dried up, it was time to consider beer. Beer with taste and where better to start than with a bottle of Hawkshead New Zealand Pale Ale, kindly given to me by Matt, the brewer when he visited the National Winter Ales Festival. 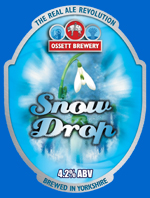 I have to declare an interest here. I am a big fan of Hawkshead beers and will sup them wherever I see them. From Windermere Pale through to NZPA, they are tremendously well made beers. Hint to other brewers. Make your beers as clean as Matt's and you are half way there. Now if I was, say, the Beer Nut, I'd wax lyrical about tropical fruits, wonderful hoppy aromas and that sort of thing. But I'm not and he's way better at that kind of thing, so I won't. Instead I'll compare it to the draught (cask) version and instead tell you it is a pretty good approximation, with the carbonation held at a slightly lower level than most bottled beers, allowing the craftsmanship of the beer to zing out. It was good. Very good.

So how do you follow that? You go to the Baum in Rochdale and purchase a pint of Ossett Snow Drop, a pale, well balanced beer with moderate hoppiness, through to a strongly bitter and hoppy finish. Then you toddle down to the Regal Moon and spend the rest of the evening with your chums drinking Ossett JPA, another pale beer, but this time much more hop forward, while avoiding that wateriness that spoils many such beers.

There you have it. I have mentioned both breweries before and no doubt will again. Why? Because they are bloody good!


If you want to put a date in your diary, mark May down. Ossett will be putting Citra out. It is a stunner.
Posted by Tandleman at 11:42

No shame in re-enforcing the point on your favourite breweries, its always good to hear they're still in good form. I shall certainly be looking out for their brews when I'm next over

I preferred Marble when it was slightly hazier - it tastes a bit too watery these days - I feel like a heretic for saying it :)

Can't recall which Ossett beers I've had, but I've liked them well enough to bring a pint glass of theirs home from my last trip to Yorkshire. Probably the only Ossett glass extant in all of Franconia.

If I could get Windy Pale here in the bottle, I wouldn't have to homebrew once or twice a week. Or Thornbridge Wild Swan FTM. Both, please, and some Jarl.

After reading your other post about nzpa I was excited to see it was on the list for nwaf. Shame it was all sold out by the time I got there on Friday. Hopefully I'll get to try it somewhere.

I has NZPA in Preston at the weekend. Excellent pint.