You'll have read no doubt about the row that has seen a beer from Slater's Brewery banned from Houses of Parliament bars because of its "controversial name" - Top Totty. If you haven't, you can read the story here. 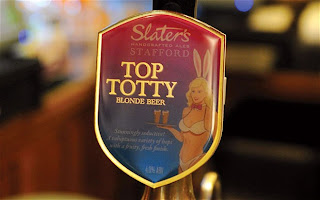 Each year I go away for a couple of nights boozing with three other mates. I'm the youngest to give you some background and I'm no spring chicken. Now Top Totty has been around for quite a few years now. It was one of the early pale, hoppy, golden ales and Slater's used to brew the beer in their pub in Eccleshall, Staffordshire. It had rather a good reputation in the North West.  Around the mid nineties, we called in the pub, the George,  dead on Sunday opening time, gasping for some TT to revive us after the previous night's supping. . Scanning the bar, we noted that our hoped for drink was conspicuous by its absence. "Where's the Top Totty?" quoth one of us. The two young and bonny barmaids eyed each other before one piped up "You are looking at it." All of us, including the barmaids fell about laughing.

It is an ill wind though that blows nobody any good. Slaters can't keep up with demand because of all the publicity.
Posted by Tandleman at 13:49

A similar thing happened to me regarding a beer called "crack whore", though with a less amusing outcome as I unexpectedly found myself in a rough part of town without the beer I was after.

last time I was at the George it had no customers and terrible beer, it used to be excellent. Stayed there in september, although not actually brewed there anymore it has to be the worst tap house I have ever been to. No customers on a saturday said it all, the Titanic beer in the other local pubs was much better.
On this note, why do brewers change the recipe of their beers to their detriment ,Totty is not the same anymore , and you can def say the same for Jaipur??

I just don't get how people can take offense to stuff like this. Just chill out already!