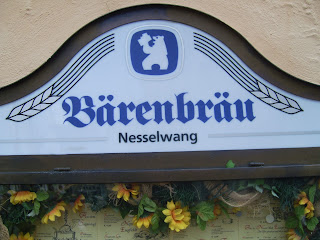 It seems that Germany too is seeing pub closures on a grand scale, which tends to make one think this is not just a British problem and not one, in Germany's case at least, that can be blamed on a smoking ban. (Germany allows its states to decide and due to that has only limited smoking bans and even those are fairly recent.)

According to The Local, the total number of places to sit and drink a beer in Germany sank from nearly 48,000 in 2001 to 36,000 in 2010. That's a loss of nearly a quarter. The state of Hamburg lost an amazing 48% of its drinking establishments in that time and as anyone who has been to Hamburg recently can attest, getting a drink in the City Centre is not that easy. There just isn't many pubs any more. Booming Berlin spectacularly bucked the trend though, with a 95.8% increase though over that period, I'd guess most of that increase will be in former East Berlin, which is now awash with little bars to satisfy both locals and the soaring tourist trade. (Berlin ironically, is still one of the cheapest European capitals to visit.)

The effects on communities is being recognised too: “With the closure of the public house, an establishment with a high social and cultural worth is lost from the community,” said Florian Kohnle, cultural geographer at the Catholic University of Eichstätt-Ingolstadt.

Don't look here for any solutions is all I'd say!  German beer tax is already way lower than here.


The Local has the full story here. I've drawn on it extensively.
Posted by Tandleman at 09:24

Das Rauchverbot is surely to blame!

36,000 seems a rather low figure, especially given that Germany has a third more people than the UK. I suspect that might be a rather narrowly-drawn definition that, for example, excludes establishments with accommodation or with a substantial food element.

Hamburg, the place in most decline, has no smoking ban. Smoking is the discretion of the owner. Most smart places do not allow smoking, most shit holes do.

Bavarian TV covered this in the Rundschau yesterday, saying that every 4th "Wirtshaus" (catch-all for tavern/pub/bar/watering hole) has closed since 2001 (or maybe I'm misremembering the year). Watch an excerpt of it here:
http://www.br.de/fernsehen/bayerisches-fernsehen/sendungen/rundschau/rundschau112.html
("Der letzte Schluck")

Cookie, Hamburg does have a ban, but it's one of the weasly ones that allows bars of under 75 qm to be excepted, provided that minors aren't permitted and there's a sign on the door. AFAIK, every one of the states have at least such a ban, there's no place in the country left without some kind of ban.

Here in Bavaria, we're lucky to have enacted a real one without exceptions by will of the people in a 61-49% vote. There are places that still violate it though, and the police semi-officially don't care.

Mudgie: I thought the numbers low too, but there is no definition given for context.

Fair enough Nick, my opinion was based on observation. Smoking bars in Munich being hidden away vs smoking bars in Hamburg being up front and in your face.

At some point I think those that want to see pubs thrive will wake up and stop moaning about smoking bans or even Tesco and figure out that culturally people have less and less utility for community watering holes.

How you reverse that is a far harder question than the believing in the usual suspects. With it comes the decline in butchers, grocers, even churches.

Yes, yes, of course I wasn't being serious with the Rauchverbot bit. This bad news was news to me in any event.

One place that *is* open is the Bierkeller of Brauerei Roppelt in the farming village of Stiebarlimbach between me and Bamberg. As of today in fact, according to their webbie, the first day of the 2012 season. If they turn on their webcam live, look for the Mrs and me at http://www.brauerei-roppelt.de/uploads/webcam/roppelt_cam.jpg in a couple of hours. We'll be the Yanks.

The smoking ban has hastened the decline of pubs that, I suspect, would in any case be in difficulty. And the huge rise in beer taxes has not helped.

But Cooking Lager is right that the value of community watering holes is less than it used to be. Boozers have the supermarkets cutting their costs. Urban dwellers such as myself arrange to meet pals on facebook or the like and agree s venue that might br some distance from where any one of us lives. When we get there, we'll find ourselves taking to each other next to other tables of groups doing the same. A sight you seldom see is regulars saying 'Hi Bert, hard day at work? Get him his usual, Sheila.'

We don't need the pub to make friends and we don't visit 'the local' but arrange a destination once or twice a week to meet up. And it might be the cinema, a restaurant, a dinner at someone's house or the pub.

My stag do is planned for Hamburg (St Pauli + beer = heaven).

Mark - I suppose it's up to you. The Reeperbahn used to redeem itself by having some decent pubs both on it and around it. Not now. It is unbelievably sleazy. You'll drink some of the poorest beer in Germany. And smoking in most pubs probably, though not so sure about that.

My most recent visit is here: http://tandlemanbeerblog.blogspot.co.uk/2008/03/join-our-club.html

I'm kind of glad I live in Baden-Württemberg, where there was also a rise. Not that I get to see it, as our local is still closed (man running it died, and the place is now being renovated).

Of course, it can't help that Germany's biggest selling beer is the dreadful Oettinger, which isn't even available in pubs (as far as I know - although I have a dim memory of seeing it a hotel bar many years ago).

That's a big assumption about East Berlin. Some parts of the East - Prenzlauer Berg, for example - were packed with pubs in the Good Old Days.

The key is "some". It is all change in the East now. I don't disagree but don't think my assumption is that big. In fact it ain't. In Berlin now nobody bothers too much about boozing in the West. With exceptions if course.