I wrote a little about my former local here. It was a well run local's local, with high standards from old style licensees. Liverpool 7 had many pubs and ours was one of the better ones, but back in these pre PubCo days, when pubs were still run by breweries and when both sides of the agreement could make a living out of the deal, having a well run pub was the rule rather than the exception. In this world, more or less everyone knew everyone else by sight at least and a visit to another pub would usually get you a grudging nod, or a "What brings you here?" We were all pub men and recognised each other as such. We all knew which pub or pubs we all drank in. 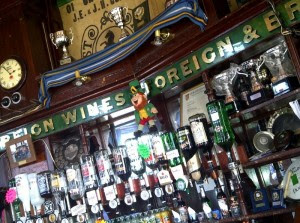 Now once in that circle - and it took a while - you could always get a drink any time that you wanted, though you had to watch where you went. Afternoon drinking, back in the three o'clock closure days, was a forbidden pleasure where, to be honest, you had to be a little careful, as such pubs as freely admitted anyone, were where a lot of pissheads and ne'er do wells congregated. It was therefore handy, nay essential,  to know where was safe and where wasn't and many a flexitime Friday afternoon was spent in such places, where the frisson of excitement when you tapped on the closed door was palpable and when or if you got the nod, it was a relief, as you entered this closed curtained, illicit world. Once I got better known, my local provided my venue of choice, as it was an afternoon exclusive for the landlord's mates. I was one. A quiet tap on the window with a coin, a glassy eyed peer from the peep hole, a click of a bolt and you were in. Safe, supping and enjoying the banter.  Much more relaxing than places some, where the enjoyment of an illegal drink was tempered by looking out for yourself.

Now of course this strictly speaking wasn't a stay behind, Liverpool parlance for a lock in or AT's. In my local, it was a little privilege accorded to a few and all the more exclusive for that. A stay behind was much more of a general thing and was after official evening closure. Our pub did them too, but these were much less frequent, more impromptu and had a different set of rules.

All this is swept away now I suppose and in a lost world. The pub scene is so much different now.  We might have more choice or better beer, but these were halcyon days.  To have been a part of it was a lot of fun and provides happy memories.

I know the cops used to be well aware of it all. It suited them if all the scallies were in the pub. Quiet life and all that.
Posted by Tandleman at 08:38

Take heart. This world still survives in Ireland. Our old fashioned licensing laws still create the situation where a well known local can have a quiet pint or two after the doors close. While there is no afternoon closing, the Irish post closing time pint is often given an added illicit spice the as the ashtrays come out, for staff and customer alike.

I've been to lock-ins in Irish pubs in Manchester where as long as the landlord knew you or one of your mates you were in. There is something particularly enjoyable about an illegal pint after hours. The last lock-in I was at was in a pub in Dublin last summer. I think there may be a link between being Irish and ignoring the rules...

It's just a shame that most Irish pubs are shite with a selection of beer that runs the whole gamut between Guinness and Heineken.

They don't exist any more.

"The past is a foreign country: they do things differently there." - The Go-Between, L. P. Hartley

I've attended a lock in or two - as late as 2003. I can't comment on the *feeling* of the era you describe, never having experienced it. However, the past often seems better in an intangible way - objectively, though, I prefer allowing pubs to open legally when they want, within broad guidelines, rather than forcing proscribed behaviour underground.

While working as a cook, a number of the restaurants I worked in had similar stay behind arrangement. Staff would belly up to the bar after hours to enjoy a pint or two after the guests for the evening finally left. In a few places special guests would be allowed to sit with us on rare occasions.

... and the police turned a blind eye ... in the early 80's my first management position was at a pub in Turnham Green where I was advised by the area manager that it was where a lot of West London police officers liked to congregate "after hours" ... I was given the choice of observing custom or licensing law ... but not so subtly nudged toward the former ... and guess what not an ounce of trouble either in or out of licensing laws

the other thing is that I learned to take a cat nap of an afternoon and ever since I still get "the drops" around 3pm ...

These days there are smoking lock-ins. I was quite charmed by the way the ashtrays came out after the door was bolted in one particular pub. Having said that, as an asthmatic who feels the effects other people's smoking, I was glad to leave.

Never been to a lock-in; as you say, seems to be the sort of thing that happens in more out-of-the-way, away from prying eyes sorts of places. Do Cellar Runs still happen? Or is that more for 'Tickers'?

I remember a lock-in in the Market Porter in the 80s - beer choice not brilliant and I remember drinking too much GK Abbot. Had some dodgy corner shop pork pies whe we finally escaped and was sick as a dog.

Never been bothered about them since...