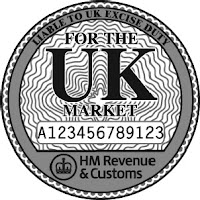 In March the Government  launched a consultation into the proposed introduction of duty stamps on beer bottles, cans and containers below 10 litres.  These stamps are already required for spirits in the UK. It claimed  that tax losses from beer duty fraud cost £500m per year and estimated that between 5-14% of beer consumption is illicit.  Now most of you, like me will wonder where all this illicit beer is to be found, but let's just assume it can be. Clearly the government has a duty (no pun intended) to ensure that duty is paid on all beer sales in the UK, but as always there is a sting in the tail. It seems, and when you think about it, it is logical, that most companies that export beer to the UK, will not want to be arsed with doing separate runs with "UK Duty Paid" labels.  It would simply be too expensive.  It seems that the number of imported brands could drop from 2200 or so to a mere 200 and these, presumably would be the, shall we say, less interesting imports. Small run, imports of exotic foreign beers might simply dry up.

Now you'll be thinking that this is a worst case scenario and there is a self interest in not doing so and to make it all sound scary and that the Government wouldn't be stupid enough to do it anyway would they?  I wouldn't be so sure.  The Government - any Government - have an endless capacity for feet shooting and stupidity.  Be concerned.

You can read the whole sorry tale in the MA here and an article I wrote about the same subject in last September here.
Posted by Tandleman at 06:59

With the current attempts to whip up anti-alcohol hysteria, would such a massive reduction in beer imports be feet shooting and stupidity, or (from their perspective) an agreeable side effect?

Those that don't paid tax are paid for by those that do. I don't see anyone saying we should have fewer schools and hospitals. Beer geeks, pay your share and stop whining.

For once Cookie, I think you are missing the point.

I appreciate that this probably is a genuine issue, but if anyone can deal with it SABMiller can. I find it hard to believe that they would actually:

Considering the point is that some companies might be put off flogging their wares in the very lucrative UK market for want of a reasonable indication of tax compliance via a sticky label, you can't blame me for wilfully ignoring the point in favour of baiting those immoral tax dodging beer geeks (you know who you are, you that signed that immoral petition against beer duty) what read your tosh.

Cooking Lager: it isn't a choice between schools and hospitals on one hand and beer tax on the other. That's a typical Tory argument, wilfully ignoring the wide-ranging nature of government expenditure, which includes nuclear weapons, invading other countries, the Olympic Games (£10 billion so far), tax cuts for the rich, failing to get the World Cup (£160 million), paying bankers' bonuses in part-nationalised banks, and so on. We can freeze or even cut beer tax without reducing expenditure on schools and hospitals.

Whether you think it's fair that British beer tax accounts for 40% of the entire European beer tax revenue, even though the UK accounts for only 13% of EU beer consumption, is simply a matter of opinion, but you are deceptively oversimplifying the facts about government expenditure simply to have a go at beer geeks. Wide of the mark this time, I'm afraid.

Some years ago NZ changed its labeling laws to specify that all alcohol would have to be labeled with NZ's own system of standard drinks (why we couldnt use the European/UK system I have no idea). At the time there was a lot of fretting that it would see beer imports all but end. Since then (last 5 or 10 years) beer imports have sky rocketed with ever more beers from around the world.

I kind of agree. But I suppose there is the possibility. I do believe though you can put stickers on by hand in some circumstances. Be a bit of a boring job that one.

I suggest you look at some corner shops when next in East London. But if the owners currently can't be bothered to remove the Belgian wholesaler's labels, or cover up the zloty price, then I don't think they will be too fussed about a UK market sticker - no doubt the market will soon have a convincing version to be ordered over the internet.

The real answer is of course to have fair taxes. Perhaps CAMRA/EBCU ahould be pushing for an EU limit on drink taxes, to say +-10% of the median? That would make avoidance much less lucrative.

I suppose that the labelling proposal would effectively put an end to foreign beer bars at CAMRA festivals?

It's been said that large UK producers export much more beer to the "near continent" than there is legitimate market for. (450m litres exported, despite demand for these products being only 180m - that's the kind of figures you see bandied about). The suspicion is that much of the balance is re-imported illicitly. If true, there's a clear motive for the producers involved to spread FUD about the impact of an excise stamp.

It's surely an aberration that wholesalers are the only part of the beer supply chain that aren't currently required to be registered. You'd hope closing this gap would allow HMRC to do their job better.

Myself, I'd be concerned about the burden a stamp would place on the smaller producer - I don't have the luxury of two lines of labels for products destined for either domestic or export sales. And if wholesaler registration is brought in I don't see the advantage in marking the container - the paper trail would be sufficient, surely.