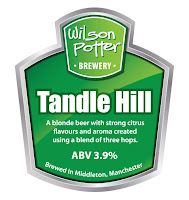 You'll all have been worried about whether my beer was up to snuff at our Jubilee party no doubt. It was. Perfect in fact and reminder that I should have confidence in my cellar abilities. A word too about my new local brewer Wilson Potter. Their beer named Tandle Hill was excellent at the brewery the other night when we presented the Beer of the Festival award for Oldham Beer Festival. It's what persuaded me to buy it and you know, as I expected, it was even better when served through a handpump and tight sparkler. In fairness though, I had the beer settling at cellar temperature, while when we visited WP, they were fighting against 28C hot weather. It was interesting too that some drinkers found the beer far too hoppy for their taste and went for the alternative, Empire Fastnet, a pale, golden beer that was a lot more malt forward.  In the dash for hops, we mustn't forget - as I do sometimes - that malt has its fans.

Still with my local breweries, yesterday, I had a chance to taste, straight from the cask at the brewery, Lees brewed Draught Burton Ale, the former Ind Coope Burton Ale which was Champion Beer of Britain many years ago.  You know what? Lees have made a very good fist of it indeed and the taste seemed to me, very reminiscent of the beer in its heyday. Worth seeking out if you get a chance. I'd guess though it's a pretty rare beast.  There is a link to outlets here and it is rated highly too.

If anyone has never been in a Head Brewer's Sample Cellar, it is fascinating. One cask of every gyle of every beer out in trade is there for cross checking and quality control. Compare and contrast.

I had the ind coope in aberdeen and really quite enjoyed it, even though i was expecting not to

Tandle Hill ought to have a picture of your mug on it, surely?

The idea is to attract punters, not put them off.

That is the flaw in Cookie's otherwise excellent suggestion.

See, I told you Lees were doing some interesting stuff on the quiet...

When Martyn was talking about Burtons a while ago, I floated the idea that Moonraker and the Manchester Star were in the Burton style. Lees actually brewing something called Burton is probably a complete coincidence, but it's interesting.

You did Phil. But I knew about those, just hadn't tasted the DBA. Manchester Star was on cask last Christmas and is bottled for the US market. It recently appeared in the Sainsbury's Beer Challenge and may yet appear on their shelves.

As for style? Dunno really.

Ind Coope Burton Ale, despite the name, isn't a Burton Ale. It's a Pale Ale.

I was unsure about Manchester Star and Moonraker. DBA is most certainly a pale ale.

I've never had a bad pint that you've had a hand in setting up. So Lees are brewing Burton? At one time, that was my favourite beer, until they began messing around with it. I must keep an eye out for it.