What is?  Beer is and more specifically real ale is.  The cask conditioning process adds a variable into beer that can take it from ordinary to phenomenal, or to the depths of undrinkable, all because of not knowing how to keep it, how long to keep it and how much of it to keep in the first place. Our CAMRA trip to Scotland showed some of these problems off first hand. Now it has to be said that real ale, cask conditioned beer is not nearly as common on Scotland as in most places in England.  Subsequently, even in the best of pubs, demand is not so high. There are exceptions of course and there are reasons, but it does make drinking cask beer far more of a lottery than it already is. And it already is a lottery more is the pity. 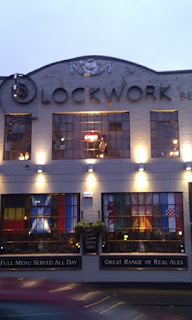 We started off brightly enough in Dumfries, which for a small town, has quite a number of real ale outlets. The local JDW, the Robert the Bruce, seemed to know its stuff. Beers were clean, well looked after and enjoyable, as they were in the Cavens Arms. In both cases the staff were cheerful and welcoming. Even the half of Draught Bass I had in the Coach and Horses showed the undoubted wisdom of having only one beer served very well and knowing what your trade will stand, rather than several served poorly . Our first stop in Glasgow was the Clockwork Brewing Company, where the results were a lot more mixed.  All the beers seemed off that elusive mark that can only be hit by good turnover and cellar excellence.  Later the same was undoubtedly the case for both the State Bar - a pub I like - and Hengstler's Circus, which I don't really - but it is opposite. Tired, flabby beers would have done nothing to convince the largely Tennents Lager swilling crowd that they were saluting an entirely incorrect flag.  Spirits were raised again in the Bon Accord, where in 1974, I drank my first ever real ale, and now, having undergone many changes, it is still doing the biz in some style. All the beers tried by our exacting crowd were in tip top condition. This pub knows its stuff and it shows. 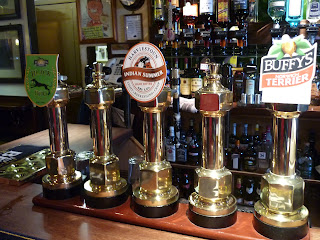 On Saturday, we moved on to Ayr and visited the home of Ayr Brewery, the Glen Park Hotel, where the beer, brewed just yards away,  was in excellent condition and served by handpumps with sparklers.  A number of awards from both CAMRA and SIBA adorned the walls attesting to the quality of both pub and beer.  Later in Geordies Byre, a wonderfully welcoming pub, spotlessly clean and interesting,  this time, dispensed by Scottish tall founts, we enjoyed a range of  three beers, all good and all oddly, but co-incidentally 3.6%, before boarding our coach to Troon, where a veil needs to be drawn over the lacklustre beer and pubs with the exception of the excellent Fullartons, where not only super quality beer was dispensed by handpumps, with the bar staff asking "With or without sparklers?", but the welcome was warm, as was the atmosphere.  It was buzzing and deservedly so.

Bright, welcoming pubs with good beer and cheerful service can still drag customers in.  In these hard times it has never been more important to get the offer right.

I commend this piece by Pete Brown to you too. It says many of the same kind of things.
Posted by Tandleman at 09:35

Ironic that the place you visited that came up the shortest was actually a brewpub! I've not been to Clockwork, but have heard similar stories.

You should get the bus over to this side of the country, Pete - some outstanding pubs, and outstanding cellarmen/women. Cask beer in Edinburgh isn't a lottery at all, in my experience

Indeed. It was so when I used to come up once or twice a month around five years ago. My visits are less frequent, but I have no doubt things are even better now.

My boss was based there for a large amount of the latter part of my working life. Great place, but I think you'll agree a bit of an exception.

From my experience, I second your opinion of the Glen Park Hotel, but also had terrible beer in a couple of other pubs in Ayr. It was also fine in Spoons, which I didn't mention.

However, as I said, sometimes in Scotland you see that lone apologetic handpump at the far end of the bar, and can't help thinking the odds are very much that it's going to be crap.

Crikey, you went out drinking in Scotland? You didn't get glassed by a Rab C Nesbit? Surely you witnessed at least some terrifying acts of violence?

You missed a treat if you didn't go in the Tam O'Shanter in Dumfries but I thought the Bruce had a boring choice of average-tasting beers. Spoons in Glasgow is Hengler's Circus. What were your opinions of WEST?