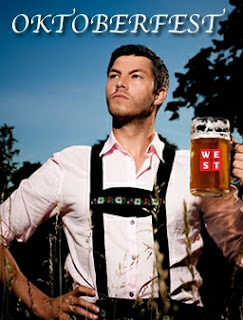 As previously mentioned, our first stop in Glasgow was the Clockwork Brewing Company, where mixed results were the order of the day.  My first pint was vinegary sludge, but was exchanged after the staff had tasted a sample from the same pump.  The offending beer was then removed from sale immediately, so top marks for that. At least there was no question of continuing to sell it.  Our party then had 45 minutes in West, which we all thoroughly enjoyed. German style beer and a great place, great atmosphere and great staff , marred only by the odd pricing. Pints are around a very reasonable £3.60 - £3.80 mark, with halves being around £2.60 to £2.80.  No sample trays are offered, so if you want to try a few, you either need to cough up, or sup from someone else's glass. It just seems silly and the only jarring thing about what is a wonderful pub.

Keeping on the Glasgow theme, when we retuned from Ayr, Troon and Houston the following day, we finished in the famous Three Judges in Partick.  Again the verdict was that the beers didn't really hit any high spots of cask presentation, which is astonishing considering the pubs almost legendary status.  We were mob handed there. All 26 of us, but nobody thought the beer much better than average. Nor was our cider bod was impressed by Scotland's Cider Pub of the Year having only one cider.

Four of us diverted to BrewDog as one of our party was particularly keen to see it.  We all enjoyed excellent service, great views of the Kelvin Hall at sunset and me an unremarkable pint of 5 AM Saint.  Despite there being no cask beer and a lot of very strong offerings, it was a good half hour and the staff couldn't have been more pleasant or helpful.  We then headed up Byres Road to another famous pub, Tennents Bar. This is an old favourite of mine, but it seems to have gone mainstream in its beer selection.  Mostly English and of the Everards/ Brains/ Wadworth's ilk, the beer was OK, but nothing special. Lager flowing from 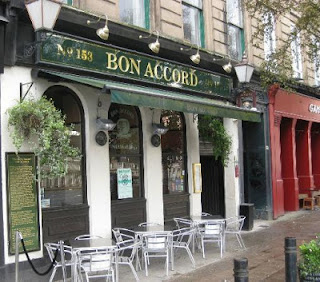 the pumps like a river, perhaps explains why.  I was the only one of our party that liked the place. Oh well. Our last stop was the Curler's Rest, poshified from my memory, but superb Harviestoun Wild Hop hit the spot - several times  - before we grabbed a taxi for late night reflection in the Bon Accord, just across the road from our hotel.

Next day in conversation with others on the bus south, we found those that had gone to the City Centre and the Merchant City had fared much better quality wise, but had still hit some lows.  This reflects to me the problem of too many beers for the clientèle that are likely to drink cask beer. Choice is often good, but quality is always good. I'd rather have two beers in top nick, that ten in so-so condition.  Poor quality beer has always been cask beer's Achilles Heel.  Pubs really do have to ensure that they always serve beer well, particularly as they struggle to lure customers in. Failure to do so really is both inexcusable and suicidal these days.

As always, when these things are undertaken, it is only a snapshot, but I've said it before and it is worth repeating. "It's the offer stupid."  Why do so many pubs fail to get that right?

On the way back to Greater Manchester, we spent a warm, sunny couple of hours in Lancaster. Lovely town, brilliant beer and pubs. I haven't been there since Mitchells closed. I'll be back soon though.
Posted by Tandleman at 10:02

Any tales of horrific street violence?

Glasgow? Civilised? You want to watch 999 on ch4 and see what goes on in Blackpool. Irresponsible pubs selling 89p jagerbombs, A&E departments like warzones, police cells filling up with swearing pukers and fighters.

Sat watching it with a can of lager in the safety of my home I have to say you are a brave man to venture into the pubs of Glasgow. For that I afford you my deepest respect and would like to express my pleasure at finding you came to no harm.

Not only me Cookster, but all my English chums survived without a scratch or a harh word being spoken to them.

Now it might well have been different in Blackpool.

It did jar somewhat to find the halves so much more than half the price of a pint in WEST but at least the price is advertised. Belfast is getting worse and in one pub I asked the price difference the other day the barman walked off and served someone else...

I failed my degree at Lancaster University mainly on account of the town having two independent breweries - Michells and Yates and Jackson - and my attempts to taste every single pint in every single pub every single day.
What an educashion though !
I look forward to your trip report when you visit the place - it was a great town in whichg to waste my youth.
Here's are some great pics of the old brewery.

Were the WEST beers really "German style" or "Franconian"? She's a Forchheimerin, you know.

And I imagine the 'no tasting tray' business is just part of the Franconian tradition -- as if you'd find something like that here! Well, except at the modern Brauhaus am Kreuzberg.