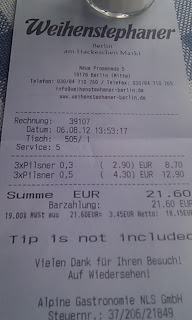 I meant to post about this way back in August, but forgot. I came across the photo when I was looking for something else. My readers will know I go to Germany a lot. I like it there and it is a place where you tend to know what is what. Once you've worked it out or read up on it that is. When I first started to go to Germany a good number of beers years ago, I looked up customs and etiquette, one of which was about tipping.  The advice then, as now is "It is typical to "round up" the amount to some more-or-less round figure generally ending with a full Euro amount."  Of course it was a Deutsche Mark then.

It is a kind of odd situation on some ways. Tipping nothing at all is still perfectly acceptable for, say, a single drink, or even a meal, but the simple rounding up works. Waiters and waitresses don't need tips to survive as they are paid a decent wage by and large, but of course it is nice to be given something and a few coins for pleasant service is a worthwhile investment.  The point is that it is not expected. If you have a look at the bill illustrating this entry you will see something I haven't seen before. "Tip is not included."  It was our last day in Berlin and I haven't yet been back, so it was perhaps not typical.  We didn't see it anywhere else, yet there it was.

This is another unwelcome creeping Americanisation which I for one could do without.  Anyone else noticed this in Germany?

And why is that the only part of the bill in English?

Spotted several times, auf English, on bills last week in Bamberg. Usually below the 'all food, drink and service included in the bill' which is written auf Deutsch.

Such naughtiness gets the obligatory 5 cent tip, unless they were pleasant to us, which they usually were.

This reminds me of the old Czech scam where there were two prices listed on the menu, one in numbers and the other in words. The numerical price was always higher than the written price. Thus it paid to learn quickly how to order beer and food in Czech! The more usual version of that these days, or at least up until 2009, was to give people who didn't speak Czech the most expensive of your beer range. For example, I would go into a pub and order 'pivo, prosim' and get a half litre of the regular desitka. Ten minutes later someone would order 'beer, please' and they would get a 0.4l of the dvanactka. This was especially prevalent in Gambrinus/Pilsner Urquell places.

The custom in CZ is the same as in Germany, to round up the bill, at least at pubs, restaurants are another thing.

The "Tip is not included" message is something you see at many places frequented by tourists, not tourist traps, mind you, those will often add a "service charge" to anyone who doesn't speak Czech

Showed that photo to Mrs, and neither she nor I can recall ever having seen such a thing. Must be a "Touristen" key on the register or something.

I'll have a look around Bamberg next time I'm up that way drinking and eating. Certainly NOT at Roppelt, where I may indeed dine on lovely carp for lunch today.

I, however, would not say that a tip is not expected. When we go out (which is admittedly exceedingly rare these days), we always tip, regardless of whether it's one drink or a meal. We do this because we see that the natives do it.

I would say *not* to tip is unusual, even ...ahem... foreign. Again, not much by Yankostandards, but a round-up.

OTOH, what to tip in your country is a curious matter for us. Nothing, of course, at a normal pub. But at a gastro-pub where you get seated and served? 10%?

(Of course, what am I doing asking here -- none of you lot would bother with such places!)

Dom, are you sure about the bit about "service" being included being printed on the bill? IIRC, that usually isn't printed. But I'll have a look. Dying to know where you encountered this in Bamberg!

I round up to the nearest euro for small bills and tack on more for higher bills usually with food. The response is always a smile and a vielen dank.

I have not seen a bill with that subtle hint on. I wouldn't call it a creeping Americanism, but any place that attracts tourists learns quickly.

In my experience the vast majority of "servers" work at minimum wage ... not the "decent wage by and large" of which you speak.

it's a real hard one this ... if we tip do we encourage employers to pay their staff only minimum wage rates ... or is tipping a genuine acknowledgement of good service ?

Is tipping directly (ie not by means of bill) better or worse than the tronc system ... you might tip the server ... but what about the cook, the cleaner, the kitchen porter ...

I think you might be mixing up Germany with here Sam. The arrangements are entirely different.

Who was drinking halves?

I was in Munich, Cologne and Dusseldorf last week (oh yessssss) and noted the servers in the Brauhases were more than keen to round up to the nearest five or ten euro mark! Those in the Kolsch and Alt supply trade were willing to see what they got.

Late to the party here.
I was also in Berlin in October, I found that some people expected tips from tourists and in the Weihenstephaner place the guy even said "tip is not included", I found that a bit cheeky and we only had two beers.
I did tip because service was fast and he was helpful but him telling me that almost put me off.

I went to some places with great food and beer but awful service, I did not tip and could see the server was not happy but it's not like I am going to these places again.