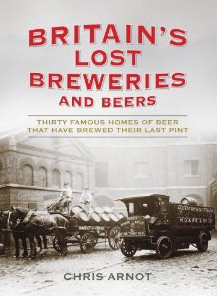 Over the last few decades and longer, Britain has lost many of its famous breweries and beers and this book documents a few of them, not so much as history, but anecdote. Names like Boddington and Tetley seem too recent to appear alongside Tamplins, Simpkiss and Bullards and it is a  personal shock to see just how many of the breweries were around when I started drinking beer and how many seem tantalisingly close even now so many years later.(I have drunk original beer from 19 of the 30 beers listed.)

The author, Chris Arnot has obtained some stunning photographs to accompany his prose and the eye is touchingly drawn to the faces looking out from drays, cooperages and pubs, for this is as much about people as breweries and beers and Chris has taken the time to seek out ex-employees to tell the story from their point of view. For many, these days are among the best of times and even when they no longer drink beer, they look fondly on the breweries and bosses and even the (benevolent) paternalism that many of these companies showed. Many of the owners were true characters, who knew every employee by name and treated them to birthday tenners, bottles of champagne, doffed hats and sometimes, downright eccentricity, as illustrated by John Young, who fought to the end against the closure of his beloved Wandsworth Brewery, often wearing boxing gloves to repel boarders and who ironically died just days before the brewery closed. Poignantly and fittingly, beer from the last Wandsworth brew was served at his funeral.

Beer too is featured too, with former brewers describing the output and drinkers fondly remembering the brews.  Sad tales abound, like Boddingtons, whose iconic beer was slowly bastardised and tinkered with until the brewery was finally closed by InBev in 2004, or Shipstones, whose marvellously bitter beer was closed in pursuit of Greenall's vainglorious tour of destruction.  Greenalls are rightly identified as villains of the piece, along with the asset stripper, Michael Cannon, who saw off Morrell's of Oxford, Devenish and Eldridge Pope.

For all its charm and nostalgia, this is not a book without faults. Tales of family and corporate greed, ineptitude, fecklessness and recklessness that pointlessly destroyed companies with fine brewing heritages stretching back over 200 years, are underplayed or go unremarked for reminiscences from the tap or sample room.  Sometimes we are told what caused breweries to close, but not always, which leaves the reader wanting to know the details behind the anecdote. We have a photo of Jonathan Simpkiss who sold out his brewery and its sixteen Black Country pubs to Greenalls, with the last brew famously being poured down the drain, thus cruelly denying regular drinkers a last farewell . A haunting tale of corporate unfeeling thoughtlessness indeed, but frustratingly, not the "why" behind it. I'd have liked just a little more consistency about why these wonderful companies disappeared.

Nonetheless these are small negatives in what is an engaging and personal book which reminds readers of a time where beer really was local, where breweries and the people employed in them were part of the warp and weft of local communities and a source of pride to them.

This book is sheer nostalgia and none the worse for that. It is a must for those like me, that remember these companies and for those that don't, it is a touching reminder that our brewing industry has a very local and personal heritage. A second volume beckons surely, as sadly, there are plenty more closed breweries to go at.

Britain's Lost Breweries and Beers is  published by Aurum, who kindly supplied this review copy.
Posted by Tandleman at 16:16

I'm looking forward to reading my copy of the book in just over 10 days time, as I know Eileen has bought me it for Christmas.

Like yourself Tandleman, I will also be interested in counting up how many of the 30 breweries' beers I managed to sample.

yes certainly keen to read the section on Tolly Cobbold, whose impact locally is still felt nearly a decade after the brewery closed.