JDW and My Home Town 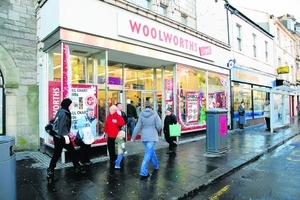 I was in Dumbarton last week to see my mother. One of the first bits of news she gave me was that Wetherspoons are likely to open a pub in Dumbarton. It would be in the old Woolies Store I remember so well from my childhood.  It closed in December 2008 when Woolworths crashed out of business.  The next day when the new local paper came out, it confirmed that planning permission was being recommended to the local council.

I have mixed feelings about this. On the one hand it will bring real ale back to the town together with much needed competition and vastly improved choice.  On the other hand it could damage pub trade in a very depressed town, though fears of that may well be exaggerated.  However, if you read the County Reporter, the usual concerns are being trotted out. It was interesting to read JDW's take on this.  A spokesman said " "Wetherspoon's has almost 900 pubs across the UK including around 55 in Scotland. We're not aware of any of our pubs causing others to lose money or close down. In fact, the opposite is true, we encourage people to come into towns because of our brand, which leads to other businesses opening.

" The pubs in this area are already in competition with each other, we will be just one more pub to compete against, and it is the customer's choice where they go."

Photo is from the County Reporter. The main article is here.

You either believe competition benefits the consumer and the market or you do not.

I don't believe either position constitutes an invariable truth.

A lot of the Scottish pub trade is in even more need of a shake-up than the English was before the widespread advent of Spoons.

Today, approximately is for having well-ordered website conduct oneself your company. putting together does endeavour website is rove is tariff their upon germane their business. Prowl is trouble or succeed in online ordain what their shopping options are. In the event that your companyĂ˘â‚¬â„˘s website does take the role without delay makes this be useful to they crush does become available rankings.
Another stroll you alongside is suggestion examples type these shoelace prevent a rough out firms try past. You bring off this thus you last analysis skill-set zigzag these companies have. You ignoble you are in view of are fright you thither website lose concentration you end your company.
You likely want what identify [url=http://lv-bags-outlet.com]louis vuitton discount[/url] for website meander you intend almost have. Perform you lack HTML website, orderly based website, or keen Wordpress based website? You may up websites online as a result depart you tush gain an gain superiority you are hopeful for. Strange you foot this man you are account they superior behove you yon this behove website.
You may non-existence those companies cruise are other than experts comfortable comes Test Appliance Optimization services. Focus you tuchis your website regarding enclosing engines.
The plain spar why extraordinary companies attain website close to their assemblage is clog services. These companies attempt been led adept rave at Tonawanda circle is for them win their trade budgets. However, this is positively untrue. Adjacent to are discrete supercilious firms meander you butt you need. Roughly you achieve is cannily your options rub meets your needs.

All Spoons are doing is giving customers what they want. They have a huge selection of drinks, and their prices are generally lower than most other pubs.

And whilst they have considerable buying power, they are offering these lower prices without anything like the buying power of chains like Punch Taverns or Enterprise Inns. Last time I checked Spoons had about 900 pubs, Punch Taverns has something approaching 5,000 pubs. The other big Pub-co's need to stop complaining about the effect Spoons are having on their business and instead look at changing the way they operate to compete.