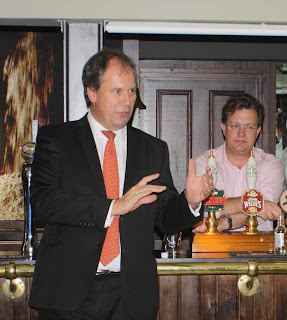 I mentioned a little while ago, that we (CAMRA Rochdale, Oldham and Bury) were visiting JW Lees Brewery as their guests, not to tour the brewery, but to hold a business meeting there. Naturally on the night, we asked William Lees Jones, the Managing Director, to say a few words.  It went roughly like this:


William first of all re-iterated his own view that CAMRA was a positive force for good in the industry and that he always told fellow brewers that a good relationship with CAMRA is vital.  In a wide ranging speech, highlights were that careful spending on the brewery itself, with programme of re-building over the years, had meant that the brewery was in tip top condition. As well as the ranges of cask beer being produced, the brewery has a completely up to date and flexible lager plant producing Golden Original and Carlsberg.  He mentioned that Golden Original sales were very impressive and that in a recent blind tasting (in which I was involved),  it had come top against leading standard lagers. William mentioned that additionally Lees are sole importers of Draught Bohemia Regent Lager which is available throughout the estate and free trade.  Lees even “export” Carlsberg Lager back to Carlsberg itself.  The estate will remain around 170 or so, give or take. Small pubs still give concern and where a living cannot be made for either tenant or the brewery, pubs will be sold. Trading conditions remain difficult, but the brewery has been able to increase profits slightly by buying good quality pubs from the likes of Punch and bringing out their potential.  Free trade has been badly affected by micro brewers being able to undercut Lees due to Progressive Beer Duty.  William felt that micros cater for a segment of the market that mainstream brewers will never cover as well and that it provided choice for consumers, though PBD does give them a considerable competitive advantage.

For the future, there will also be more investment in brewery plant and pub décor as there is no intention to quit brewing or to become a Pub Company.

This was a very lively, informative and open meeting with William being questioned closely on the company's products, policies and plans.  While Lees do rely on food, as William put it "I'm not here today to discuss the quality of our chips", The focus was on beer and it was good to see a local brewery still totally committed to brewing.  You certainly didn't get the feeling that Lees are stuck in the past, rather, keenly aware that times are challenging and changing.

On the social side, we had a preview version of Plum Pudding, the Christmas beer and all the beers were, as you'd expect, on top form, particularly the Brewer's Dark, which I'd been looking forward to.  I was rather impressed too with John Willies, a beer you don't come across all that often.  I even managed to resist (just) a pint of Bohemia Regent.

And the home made meat and potato pie (from the Old Boar's Head I believe) with red cabbage was lovely too!

This article first appeared in the Winter Edition of our own More Beer Magazine.  The photo is William Lees-Jones addressing members, with Head Brewer Michael Lees-Jones looking on.
Posted by Tandleman at 09:53

Glad to learn that Lees are doing ok and are committed to staying in brewing. There certainly seem to be some interesting developments occuring over at Middleton Junction!

I think that despite all the exciting developments going on in the world of brewing, especially amongst the more adventurous micro's, we still need the likes of established family brewers, such as Lees and Harvey's. The pub world would certainly be a poorer place without their presence.

Hope you had a good Christmas Peter, and wish you all the best for the New Year.

Anon. Come out in the open you pathetic tosser.

Anon. Come out in the open you pathetic tosser.

Oh well, if that "anon" won't man-up, I'll happily yawn publicly at "Free trade has been badly affected by micro brewers being able to undercut Lees due to Progressive Beer Duty". Yawn. There.

'Vintage Harvest Ale selling massively in the US in various forms'
Well make them available in the U.K.!! It's nigh on impossible to find the standard version here. As for the various barrel aged versions (Calvados, Sherry etc.) Fuller's seem to cope with the U.K. tax regime so why not Lees. It's ludicrous that I had to ask a friend in New York to bring some bottles to a beer festival I was attending in Belgium when I live less than 40 miles from the brewery.

Stringers: Not an issue at all then?

Birkonian: I'll ask them about that but I think it will sell better and more expensively in Yankley.

It's the kind of FUD about PBD that is trotted out from time to time. There will always be competitors who use aggressive discounting, whether PBD continues in its current form or not. It's a pity, I'm sure, that Lees can't get the prices in the free trade that they're used to charging their tied tenants.

Yawn? How can anyone yawn at Tandy? Blogger Gold?

AS for PBD, can we think of any other product where the government favour small producers in the tax regime?

Ah the great British fag industry. And of course, Corporation Tax. I think?

No, what we need is more "efficient" businesses. Like Tesco, and Starbucks.

The downward price pressure of competition forces efficiencies, but a favourable tax regime excuses this combined with a raft of mug punters that think paying more is a good thing. But chill, I only put craft diesel in my motor.

@mudge: certain biofuels did have a lower duty rate. I think. I'm not sure that's the case anymore. But apart from that, there aren't really any small producers to favour. It's a very different market innit.

@cookie: there's plenty of ways that producers respond to competition - product differentiation for one - sure, all beer will get you equally pissed, but consumer aren't mugs if they choose to spend more for other qualities. So, no, increased "efficiencies" aren't either inevitable, or, necessarily, desirable. Unless you're an investor in a poorly differentiated, easily substituted product such as commodity lager.

Specialists The [URL=http://www.nfoutletonline.net/#921]north face outlet[/URL] to give its top, most computer Upper Face Backpacksadvanced jackets. Constantly converse for the remainder of its comprehensive series but yet I'd buy any kind of these that individuals tried.Even though some of the alternative reviewers will likely disagree, I had put the [URL=http://www.nfoutletonline.net/#1062]north face outlet online[/URL] Complimentary Thinker over the Arc'Teryx Sidewinder.

I think the price of beer is killing pubs (greedy breweries or hmrc or both). Rates long with pub leases etc need to b reduced substantially. Just look at jwl handling of horton arms on streetbridge